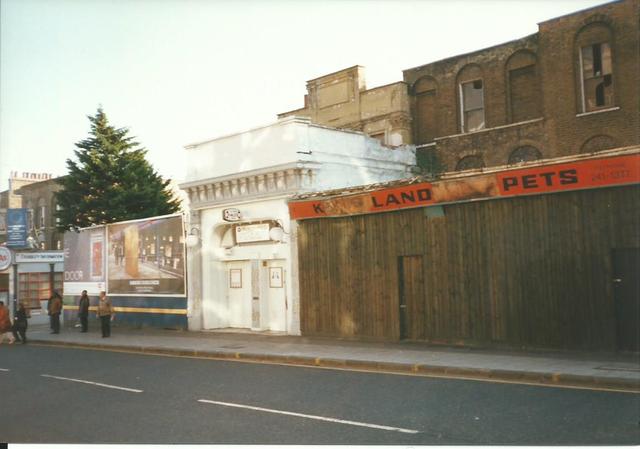 In 1897-1898 it was re-built to the plans of the noted theatre architectural firm:Wylson & Long. With a capacity given as 3,515 (possibly including standing room) it re-opened on 25th September 1898 as the Dalston Theatre of Varieties. It was promoted by Milton Bode and Edward Compton who operated the theatre until 1914, when James Langdon Lee took over until his lease expired in October 1919.

In 1920 Biocolor Picture Theatres purchased the building and architect F. Edward Jones, assisted by Robert Cromie, re-designed the building as a cinema. It opened on 6th December 1920 with Sessue Hayakawa in “The Illustrious Prince”. Seating was provided for 2,157 in stalls and balcony levels. Unusually stage facilities were not retained and the projection box was located in the rear stalls, a cafe was an added amenity. The main entrance on Dalston Lane was part of the original Dalston Circus building while the auditorium walls were retained from Wylson & Long’s 1897 building and and raised higher.

In 1927 Biocolor Picture Theatres Ltd. were taken over by Gaumont British Theatres in November 1926 and they operated it successfully for many years as the Dalston Picture House. In 1951 it was re-named Gaumont Theatre and operated under this name until it was closed by the Rank Organisation on 19th November 1960 with Donald Sinden in “The Siege of Sydney Street” and Michael Wilding in “Hello London”.

It became a warehouse storage space for Tesco supermarkets, then was a car auction sales room for many years. The front foyer section was bricked off and operated as a nightclub called the ‘Four Aces Night Club’. Dereliction had set in within the main auditorium and plaster had dropped off the ceiling revealing just the roof girders. This area was used as a nightclub called Roseberry’s from 1994 until closing around 1998.

Despite objections from the Theatres Trust, the Georgian Group and the Cinema Theatre Association and the best efforts of local campaigners who squatted within the building, the Gaumont was demolished in February 2007. Housing has been built on the site in a new building which also contains a library and Hackney Archives, which is almost adjacent to the new Dalston Junction Overground Railway Station.

The Gaumont was demolished in February 2006, despite protests from campaigners to save it.

Sorry for the typo, the demolition was February 2007.

Details and photgraphs of the February 2007 demoltion of the Gaumont Dalston:
http://www.opendalston.blogspot.com/

I remember watching Errol Flynn in “Robin Hood” and “The Lady and the Tramp” in a double bill here. I must have been about 5 or 6 years old.

Round about 1987 I was working on the then disused forecourt of Dalston Junction station, and parked my car opposite the exit that was in Roseberry Place. I noticed the door was open and stuck my head in. The place was now pretty decrepit and there was a horrible smell of exhaust fumes from the car auctions combined with the strongest odour of damp I had ever experienced. That took a lot away from my happier memory as a child.