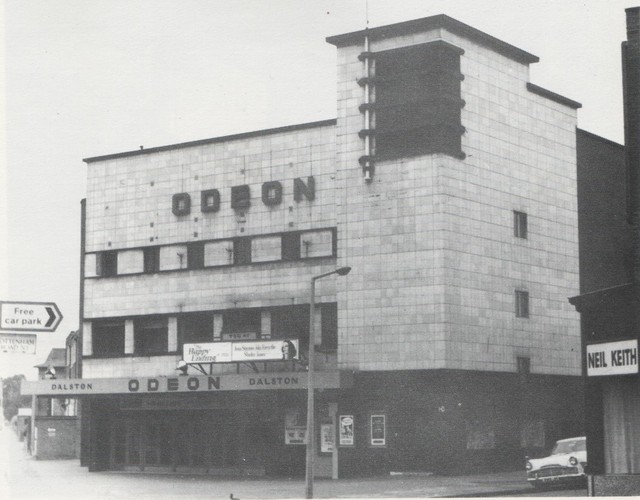 Built for and operated by the Oscar Deutsch chain of Odeon Theatres Ltd., it opened on 1st May 1939 with Laurence Olivier in “Q Planes”. Built on a rather awkward site where two roads converge, the main facade of the building was set back, facing Kingsland Road.

It was rather ‘boxy’ and had a square tower feature on the right hand side, the entire facade was covered in light yellow faiance tiles. Inside the auditorium seating was provided for 1,319 in the stalls and 745 in the balcony. Lighting was via small light fittings suspended from the ribbed ceiling and there were decorative panels on the splay walls each side of the proscenium.

The Odeon was converted into a triple screen cinema from 10th December 1972 and screen 1 in the former circle retained the original 745 seating capacity, while the two mini’s in the rear stalls area seated 120 each.

This was a very difficult cinema to maintain in the 1970’s due to mainly to vandalism and the Rank Organisation gave up on repairs and closed it down on 31st March 1979 with Donald Sutherland in “Invasion of the Body Snatchers” showing in screen 1, Karine Gambier in “Everybody’s” (Luxure) and “Sex Time in Paris” in screen 2 and Michael Palin in “Jaberwocky” and Burt Reynolds in “Hooper” in screen 3.

The building stood empty until 1984 when it was demolished and a block of flats called De Beauvoir Court was built on the site.

An exterior photograph of the Odeon taken in Autumn 1949:
View link

The building stood opposite the Plaza and was just round the corner from the Gaumont.

The outside of the cinema can be seen in a short film by John Smith called ‘girl chewing gum’ – from about the middle of the film. Google ‘girl chewing gum john smith’ and you can watch it on Youtube

Of all the local cinemas that I can recall, this was the most paltatial in Hackney. There was nothing about it that merited the title of “Fleapit” that was so often associated with other cinemas in the area.