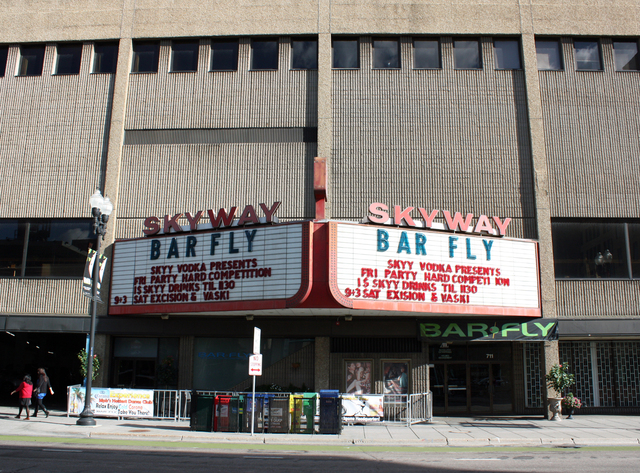 When the Skyway 2 Theatre opened in downtown Minneapolis on October 3, 1972, it was the first new movie house built in over 40 years, and would be the last until the late-1990’s, as well. During its early years, it was part of the ABC Theatres chain.

It opened with “Deliverance” in Skyway 1, which sat about 975 and “The New Centurions” in Skyway 2, which sat just over 700. Skyway 1 originally had a small balcony, while Skyway 2 did not.

Unusually, the theatres were not on the street level of the building originally. The cinemas were on the second floor of the building, and named for the city’s once-famed Skyway system, a connecting series of pedways which linked many buildings in downtown Minneapolis.

During the 1970’s, the theatre often resorted to gimmicks to promote movies playing at the Skyway, such as when the adult film “Flesh Gordon” was playing there, and it’s star, Suzanne Field, appeared live to sign autographs in a see through top, or during the premiere of “Bugs Bunny Superstar”, patrons received a carrot with their tickets. A toga party was held in the lobby by college students during the opening night of “Animal House” in 1978.

However, the biggest stunt ever at the Skyway was when the movie “Ice Castles” had its world premiere there, and a stretch of Hennepin Avenue in front of the theatre was blocked off and turned into a temporary ice-skating rink. However, unfortunately, due to unusually warm weather for a Minnesota winter, the ice quickly melted mid-way through the premiere.

By this time, the Skyway was in falling into decline, and during the 1990’s had a reputation for being poorly run, filthy and dangerous. (During a screening of “Boyz in the Hood” in 1990, fistfights broke out, and outside the theatre, gunshots were fired, wounding seven people).

The Skyway 6 was mercifully put out of its misery in 1999, and with it, the era of Minneapolis' downtown movie houses ended as well. (Three years later, movies would return to downtown when the Crown 15 opened).

The vacant and decrepit former theatre is partly owned by two men, each with a drastically different view of the Skyway and surrounding block’s future. One owner sees the entire block being razed, with a luxury hotel replacing it, while the other sees a restored Skyway theater, perhaps used for art and foreign features. The future of the old theater still remains undecided.

By 2015 it had reopened as a live music/concert venue, which can accommodate audiences from 200 to 2,500 in its various spaces.

The June 14, 1971, issue of Boxoffice Magazine ran an item about the groundbreaking for the Skyway I and II complex. The new house was designed by ABC’s consulting architect of the period, Henry G. Greene.

BTW the Exorcist opened at the Gopher, it played the Skyway 2nd run some time in 76. I scared the bejebus out of 3 girls when I told them they couldn’t smoke just as the bed started shaking.

Also below is the website for the Skyway’s current tenant. Copy & paste to view.

In 1975, a ground floor third auditorium was added in what had originally been indoor parking, and was itself twinned in 1982. This is not correct. auditorium 3 was on the same level as 1. It was down the hall from the ticket taking station. Auditorium 4 was built in the parking space as described. I was working there as a Manager when it was built.

This opened as a twin on October 3rd, 1972. Grand opening ad in the photo section.

I saw the movies Freejack & Hook here one night in January 1992, while waiting for an intercity bus. I remember the theater and the block were pretty well run down, and there were very few other patrons. I remember dirty red carpet, a rather cramped and dingy second floor lobby, and two rather unmemorable movies.

My most notable memory of the evening came at the end of the night. It was later than I thought when the show ended, and I had to run as hard as I could down the street to catch my bus as it headed out of town (plan B was a night on the sidewalk). Oops!

Updated link for the BarFly photos: