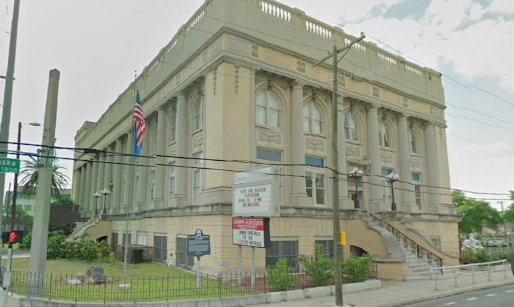 Built as a full-service cultural center for the fractious, large Cuban comunity of Tampa in the early part of the century. It had a large ballroom, restaurant, meeting rooms and other amenities. 1914 is listed as completion year and the architects were Bonfoey & (M. Leo) Elliot. There were several large cultural clubs of the era and several of these grand buildings survive.Two, at least, including this one showed movies often in it’s large theater. I have to expect that most showings were in Spanish.

The building was landmark listed on the National Register of Historic Buildings in 1974.

That is a wonderful photo of a spectacular building. Thank you for posting.
George

Please provide any stories or information that you might have about this theatre (or any single-screen theatre in Tampa) here… http://historictheatresintampa.blogspot.com
This will assist us in preserving the history surrounding these theatres in Tampa. Thank you!!

Wow…didn’t think this place was on here! I moved to Tampa in the early 90s & my earliest memory of this location was known as the ‘Casablanca’ nightclub! It was my home away from home on Saturday nights. It was especially nice in that it re-introduced me to my latin roots in music & Salsa dancing (I’m Puerto Rican by nationality, but born & raised in NYC) & now my preference to dance at ALL is Salsa dancing! Not to mention it was “all-ages” because I recall being younger then 18 when I frequented this club! Good times! Don’t remember seeing a movie theater room though, but then again, the ballroom used for the nightclub was on the 2nd floor & that’s where I always went, so no surprise there (the building is HUGE!)

This is such a beautiful building but I don’t believe the Centro Asturiano Club ever ran movies (at least not as a commercial theatre.) They may have run films from time to time for club members but Centro Asturiano was never advertised as a movie theatre in the papers.

Even so the large beautiful theatre on the 2nd floor (with the balcony on the 3rd floor) certainly looks like it could have been a movie house but I believe it was used strictly for stage performances.

Has anyone heard of Teatro del Circulo Cubano that would have been in operation in the 1920s? Thanks.