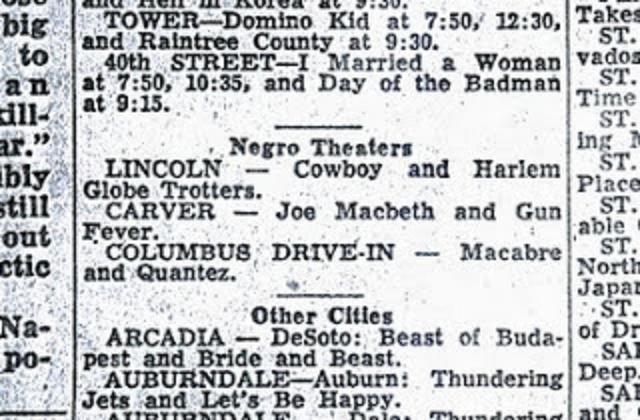 The Lincoln Theatre was one of two Negro movie houses located in the segregated business district on Central Avenue near downtown Tampa. The first listing in the city directory appears in 1944 although it may have opened towards the latter portion of 1943. Advertisements for the Lincoln Theatre did not appear either in the movie listings nor the theatre time clock listings of the Tampa Tribune until 1958 making it nearly impossible to pinpoint the exact opening date.

I recall seeing the building many times over the years although it was from a distance of about two blocks away. The building was approximately a half-block long as best as I can remember so it was a good-sized theatre. Unfortunately I have no resources available for number of seats and who the owner/operator may have been.

Photos of the building are practically non-existent. In the two photo archives for the Tampa area there are just a few shots of various buildings in the Central Avenue business district including a couple shots of the Central Theatre which was located one block north of the Lincoln Theatre. Elusive as it may be I’ll continue searching and I’ll post any photos I’m able to find.

In a published interview with a local who had grown-up in the Central Avenue area during the 1950’s and 1960’s, a story emerges about how excited the kids were when they would bring in the gorilla on Saturdays at the Lincoln Theatre. For about 15-cents admission they would get to watch several local guys wrestle the gorilla! Whether the gorilla was real or a man in a costume was never revealed. He also mentioned many musicians both local and famous performed on the Lincoln’s stage over the years.

The very first ad published in the Tampa Tribune appeared in the generic theatre time clock listings on July 6, 1958. Double features were the standard programs along with cartoons and serials. Based on the ads Westerns appeared to be especially popular and played frequently.

Then in January 1969 the Lincoln Theatre began running ads for X-rated films. These films ran through February of 1969 and afterwards disappeared from the listings for good. No further ads were published beyond this date.
The adult film ads were published daily as a small boxed-ad in the general listings along with other theatres evidently in the hopes of attracting a wider audience in addition to the locals.

The last year the Lincoln Theatre appeared in the city directory was 1970. More than likely it closed shortly afterwards. The building was demolished along with the entire Central Avenue business district in the early-1970’s as part of urban renewal. Several buildings in the area had also been burned or damaged during the riots that took place in the late-1960’s.

Today the area is a wide open grass field with a small portion used as park with a cement ramp for skateboarding. Central Avenue itself no longer exists within the few blocks that were once the former business district. The street was covered over and absorbed as part of the large grassy field. A portion of the land is currently being cleared for future development.

Thanks Nick.I could look at those ads all day,but the Falcons are getting ready to come on.Go Birds.

Thanks for posting Nick.

Owned in 1967 by Bailey Theaters of Atlanta, Ga, H.T. Spears, President. They owned 26 theaters in Alabama, Florida and Georgia in 1967.

Perhaps someone else has more info or photos.

Thanks for the info Bob! I was finally able to find this one photo of a band concert on the Lincoln’s stage in 1944. Still searching for others.
View link

April 7 1963 has “It’S ONLY MONEY” and “NO MAN IS AN ISLAND” playing. They almost always had double features.

I remember going there as a kid with my Mom. We saw The T.A.M.I Show featuring The Rolling Stones, James Brown, Marvin Gaye, The Supremes, Leslie Gore and many more. I will never forget how James Brown just tore the stage up but The Stones were coming on after James finished his set. But the whole audience just got up and left after James finished. The Lincoln was in a “segregated” area but I also saw a few Doris Day and Rock Hudson movies.

Thanks jrock1956. Great to hear from someone who went to the Lincoln. I enjoyed reading your post—evidently there weren’t any Stones fans in the audience!

The Lincoln was on Central Ave in a black section of Tampa above Nebraska Ave which separated it from the old Ybor City with 7th ave serving as downtown Ybor City. It was the only theater I saw movies in before leaving Tampa in 1968. It was on the same street as the public housing complex with the same name near Booker T Washington Jr High School. Since I lived off 22nd ave it was a bit of a risk to see movies there unless I knew somebody or laid low so as not to be identified as someone from another neighborhood. As kids we got into a Saturday matinee with either three RC cola bottle tops or 15 cents to see GODZILLA!