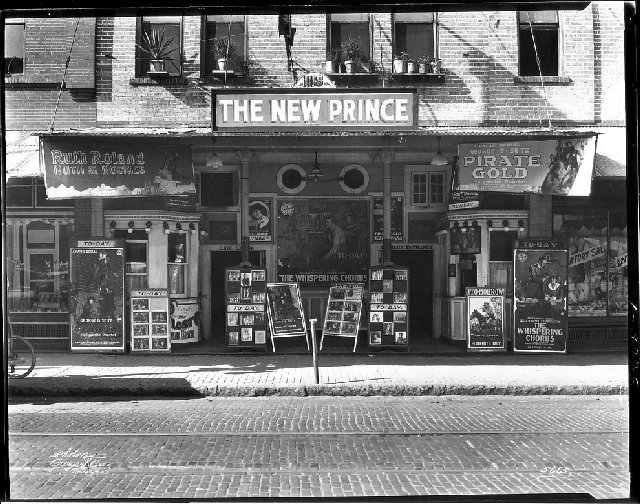 The Rex Theatre was located downtown just two blocks north of the State Theatre on North Franklin Street. This five-to-six block section of Franklin was known as the skid-row area of downtown for many years. It was populated with numerous dive bars and juke joints. Drunks and panhandlers roamed the streets and alleys. Not an ideal location for a theatre but nevertheless the Rex Theatre did manage to survive for some time.

This theatre proved very difficult to research. In addition to having it’s name changed at least three times, it did not always appear in the theatre listings under either name, making it nearly impossible to determine opening and closing dates. Searching through microfilm ads as well as the addresses in the city directory, I was able to verify that the Prince, Orpheum, and Rex were in fact the same theatre.

There are two photographs of the Prince Theatre from the Burgert Brothers Collection which are dated 1920 and 1921. However, the theatre may have been open earlier. Searching through several years I found only one ad for the Prince Theatre in 1933. For whatever reason the owner/operator apparently did not feel the need to advertise very often. When the Prince Theatre closed the space was listed as vacant for a few years according to the city directory. It reopened as the Orpheum Theatre around March 8, 1936 which was the first published listing I could find for the Orpheum Theatre.

"Devil Dogs of the Air" and "Mary Jane’s PA" was the advertised double feature. The Orpheum Theatre was not in existence for very long. As best as I can determine it might not have even been open a year. From 1937 to 1940 the city directory lists this address as vacant. On March 29, 1940 The Rex Theatre opens with the double feature, "The Night Hawk" and "Billie the Kid Returns". For the next 11 years the Rex Theatre played the cheapest films on the market in addition to occasional second or third run showings of more popular fare. During this period admission was 10-cents for children and 15-cents for adults.

According to a former projectionist who occasionally worked the booth, the Rex Theatre was owned and operated by private independent owners who also operated theatres in Jacksonville and Miami. The Rex Theatre seated 327 on a non-sloped floor. Restrooms and exit doors were located behind the screen. Entry into the booth was directly above the cashier in the tiny box office. In order to gain access the cashier had to move to one side allowing the projectionist to climb the wooden ladder into the opening above.

The walls, ceiling, and floor of the booth were made of tin which made a clomp! clomp! noise when walked on which was probably audible to patrons to some extent. The projectionists' wife would drop by every so often with dinner. She would have to climb the ladder halfway up and hand him his dinner through the opening above. Occasionally drunks would make their way inside and sleep it off until closing. The Rex Theatre was probably about as close to a "grindhouse" theatre as Tampa ever got.

The last published ad I was able to find was dated May 12, 1951. The final features to play were "Twilight in the Sierras" & "That Wonderful Urge". Since ads were only published sporadically the Rex Theatre may have in fact been open longer but unfortunately there’s no way of verifying this for certain. Following closure of the Rex Theatre, the space may have been utilized as a shoe store at some point, and it may also have had other uses.

When the skid-row section of North Franklin Street was cleaned-up years ago, many of the old dilapidated buildings were torn down along with the building housing the Rex Theatre. All that remained of the former Rex Theatre was the bare concrete floor which became a parking lot for several years. The area was later developed and is today no longer considered skid-row. A new eight-story condo called Residences of Franklin Street sits on the former Rex Theatre site.

Mike Rivest says it was a Nickelodeon Era Theater?

Anyone have any photos?

I asked for the photos while Nick was sending them, note the times.

I had never thought about it but you’re right, Bob. The Prince may have in fact began life as a Nickelodeon. And during that era I wonder how many other Nickelodeons Tampa might have had. Microfilm copies of the local paper go way back to the very first issue in the late 1800s I think. Would certainly make an interesting research project!

Hah. I’ll see if I can make a day out of it or something.