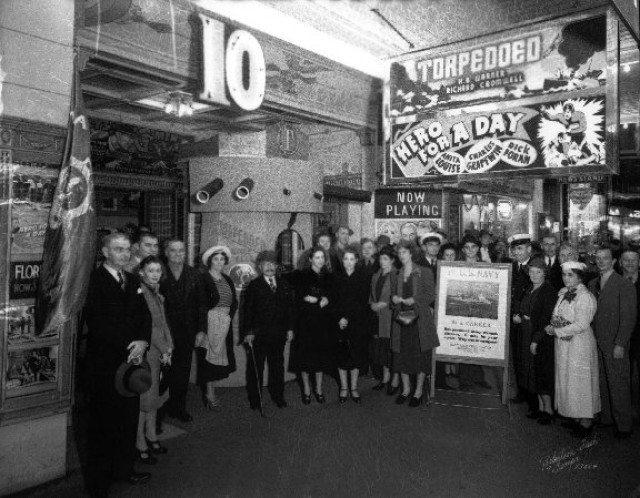 The Franklin Theatre was a small non-descript theatre sandwiched between the Citizens Bank Building on the left and O'Falks Department Store on the right. It opened February 17, 1924 and there isd an old photo of the building dated 1924.

On November 6, 1938 it was renamed Florida Theatre. The 1941 and 1943 editions of Film Daily Yearbook lists the Florida Theatre with 853 seats and operated by Paramount Pictures Inc. through their subsidiary E.J. Sparks. The 1950 edition of F.D.Y. lists 900 seats. By the 1950’s it came under the ownership of ABC Florida State Theatres. The Florida Theatre was remodeled in 1947, to the plans of Jacksonville bassed architectural firm Kemp, Bunch & Jackson.

A friend tells me he spent many Saturday afternoons seated in the last row of the balcony up against the projection booth watching B-westerns. Many Saturday matinees featured 3 extra cartoons in addition to the daily features. In the early 1960’s admission was 20 cents for kids, and 60 cents for adults (same as the Ritz Theatre in Ybor City).

I vividly recall my first visit to the Florida Theatre in 1960. The double feature that day was "The Mummy" (the 1959 color version with Christopher Lee) and a western called "Money, Women, and Guns". But it was "The Mummy" that I was really anxious to see. My father drove a friend and I down to the Florida Theatre and we stood in front of the theatre looking at the poster for "The Mummy" while I begged my father to let me go in. He was concerned it might be too scary for two 10-year-old kids, and that I’d surely have trouble sleeping at night. After what seemed like ages I finally managed to convince him, and my friend & I bought our tickets and headed for the balcony. When the lights went down and the film began our hands went up over our eyes - it was scary as heck! And of course I couldn’t sleep that night.

Although it was fairly neat and clean the lobby was rather drab looking. As best as I can recall the walls were plain, sans any fancy decoration or artwork. I do remember the red carpet was showing some signs of wear. There were no doors at the auditorium entrances, only a curtain on a swinging rod that was swung open during intermission and closed while the show was in progress. Of course this did very little in preventing outside noise from the lobby or Franklin Street from entering the auditorium.

The side walls in the auditorium were painted light brown from bottom to midway up, and light beige from midpoint upwards. In the early "silent film" days the Florida Theatre had a proscenium and a small stage. The stage was hidden from view with the arrival of sound when a larger screen and speakers were installed within the proscenium.

Towards the later-1950’s a new wider screen replaced the older one. This new screen stretched from the edge of the left exit doorway, and across the front of the proscenium to the edge of the right exit doorway giving the Florida Theatre a CinemaScope capability. This screen was totally bare - no main curtain nor side curtains. And of course the proscenium was forever hidden from view.

So in preparation for the big event the Florida Theatre closed for renovations. The drab lobby was completely redone giving it a bright, modern retro-1960’s look. Gone was the worn red carpet now replaced by a newly-tiled floor. Silver and blue wallpaper covered the lobby walls, and shiny new doors with circular viewports were installed at both auditorium entrances which effectively blocked out lobby and street noise.

The theater entrance was restructured with a new box office built inside the newly designed foyer against the right side wall. A large mirror covered the wall opposite the box office along with four new poster display cases that now featured "West Side Story" posters and color photos from the film. Bright lights hidden underneath glass panels below the marquee illuminated the foyer and entrance area tremendously.

There were only a few improvements made in the auditorium. Aside from new carpeting and a brand new screen, all seats on the main level had been re-upholstered with new red fabric. A dark blue waterfall curtain was installed in front of the screen (the waterfall design is a curtain that forms loops at the bottom and rises/decends) giving the Florida a small touch of elegance. The side walls of the auditorium remained exactly as they were. There were no changes made to the balcony or balcony seats.

A few weeks before "West Side Story" opened, ads began appearing in the local newspapers announcing that reservations to see the film at the New Florida Theater were now being accepted. Tickets could be purchased either by mail or at the box office in advance. This was all new for local filmgoers who had never heard of having to make reservations or purchasing tickets in advance just to see a movie. Admission increased drastically as well. The 20-cent and 60-cent admission was history.

Tickets for "West Side Story" were $1.50 to $2.25 for all ages. There was no reduced admission for students and children. The difference in price was based on seat location (main level, lodge, or balcony) and day and time of showing. The film was shown twice daily (matinees 2:00 evenings 8:30). When the special roadshow engagement ended admission reverted back to popular prices. I do recall children’s admission was 50-cents for just about all attractions thereafter. Not certain about students and adults but more than likely it was 75-cents for students and $1.00 to $1.25 for adults.

"West Side Story" ran for nearly three months and was followed by several big attractions over the next few years. Among the many notable films opening first-run at the Florida were:

Around or about 1974 the Florida Theatre began featuring black exploitation films and second-run double features, and not long afterwards the theatre closed its doors. The building remained locked until one day in the late-1970’s when a small crew of men arrived in two tractor trailer trucks and began stripping the theater. I stood across the street and watched as they hauled out all projection equipment, speakers, curtain, refreshment center appliances and counters, etc. and loaded all equipment unto both tractor trailers. A friend who was a former union operator told me the equipment was probably being driven to Florida State Theatres warehouse in Jacksonville and placed in storage until needed at another theatre.

The building sat vacant for a time and was finally demolished around 1978. Today the TECO building sits on the site. The front brick plaza directly outside the TECO lobby entrance is the exact spot where the Florida stood.

I do miss the Florida Theatre. The picture was always bright and well focused on the screen and the sound was consistantly sharp and clear and remained at a good level. And since the theatre was small the screen always appeared to be much larger than it actually was no matter where you were seated.

Here’s some trivia that took place on a horribly tragic day. In looking through the theatre ads for 1963 I noticed BLOOD FEAST opened at the Florida Theatre on Friday, November 22, 1963. President Kennedy was assasinated at 12:30 PM, and the first showing began at 1:00. Shortly after the news hit the air many theatres nationwide closed down for the remainder of the day and the following day as well. Not certain if the Florida or any other local theatres closed or remained open. More than likely they ran the first afternoon showing (since tickets had already been sold) and cancelled all other showings.

Although BLOOD FEAST is well known as an extremely low budget drive-in programmer, it actually opened in several first run theatres nationwide before hitting the drive-in circuit. I remember seeing the trailer at the Florida the week before it opened. Audiences that had come to see THE LEOPARD with Burt Lancaster were totally grossed out!

Nick ALL THe AUGUSTA theatres Closed that day and part of the next.

WOW—HOW YOU DO BRING BACK SOME MEMORIES—I WAS AN USHER AT THE FLORIDA THEATRE FROM JAN 1963 UNTIL LATE AUGUST 63—IT WAS A GRAND TIME ESPECIALLY SINCE I GOT TO WORK AT THE PALACE AND THE TAMPA—O THE WEK END MATINEE’S SELLING CANDY—==SAW INTEGRATION COME INTO PLACE-PICKET'ERS OUTSIDE THE FLORIDA AND THE BIG MIRROR ON THE RIGHT SIDE WAS INSTRUMENTAL IN MY FINDING MY FIRST GREAT ROMANCE WITH A BEAUTIFUL BLONDE WHO WORKED NEXT DOOR AND WOULD COME IN AND EAT LUNCH-HOT DOGS AT THE COUNTER AND WATCH A FEW MINUTES OF A MOVIE WITH ME—THE LONGEST DAY AND WEST SIDE STORY WERE RESERVED SEATING AND I HAD A BALL.WE ALSO GAVE HALF PRICE ADMISSION TO THE GIRLS OF WEEKI-WACHEE..THANKS FOR THE GREAT PICTURES;;JOHN VITCH

Thanks John! Enjoyed reading your post. Great hearing from an employee of the Florida. Seldom do former employees of area theatres post comments. I remember the Weeki-Wachee promotions the downtown theatres would always run either before or after the feature. That was certainly a nice gesture on the part of Florida State Theatres to allow the Weeki-Wachee girls in for half-price admission. I’m sure the girls appreciated that! Thanks again for commenting.

lists the Florida Theatre as having opened as the Franklin, but the street address is 712 Franklin, not 710. Can you verify this one way or the other?

Will, The theatre originally opened as the Florida and was later changed to the Franklin Theatre. Years later the name was changed back to the Florida. The address is listed as 710 Franklin Street in all theatre ads as well as the city directory. The 712 Franklin Street address was more than likely O'Falks Department Store—the building next door to the theatre.

Note: there were two very small shops within the theatre building itself immediately to the left and right of the theatre entrance (you can see a small portion of each store in photo above.) As I recall in the 1960s one was a jewelry store but not certain about the other one. The address of the store on the right could have been 712 but the theatre was definitely 710 Franklin Street.

This opened as Franklin on February 17th, 1924 and renamed Florida on November 6th, 1938. Both grand opening ads in the photo section.

Thanks rivest266. This is interesting. In your newspaper post for the Alcazar dated 1911 the Bonita Theater is also listed. The address for the Bonita is 710 Franklin which is the same address of the Franklin/Florida. The building shown in the photo appears to be either recently constructed or renovated. I wonder if this building was formerly the Bonita or if a previous building housing the Bonita was demolished. I need to research this.