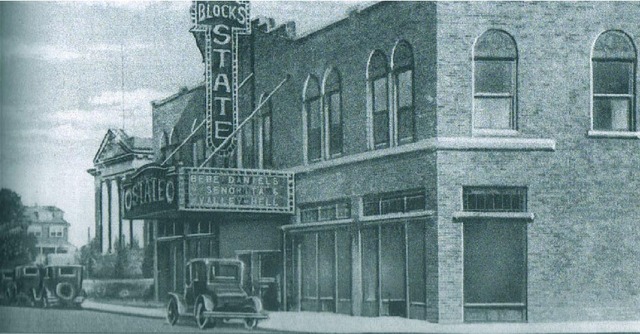 The State Theatre in Woodbridge was located on Main Street, directly next to the old Town Hall. It was opened by Mark Block on September 19, 1927 with Jean Hersholt in “Alias the Deacon”. It was equipped with a Kloehs Unit Orchestral Organ which had 2 manuals and 7 ranks which was opened by 19 years old organist Irving H. Doyone. Film actress Louise Glaum appeared ‘in person’ and entertained the opening night audience.

The theatre was closed April 8, 1969 with Rex Harrison in “Doctor Doolittle”. It was demolished in the 1980’s to make way for a QuickCheck convenience store.

Growing up in neighboring Carteret, my experiences with the State were limited. The last movie I remember attending there was Goldfinger in 1965. The State reminded me a bit of the Ritz in Carteret; about the same size, one level with a raked floor. In fact the Ritz and State were constructed in the same time period, opening less than 3 weeks apart in September 1927. While reading up on the older Carteret theatres at the online historic newspaper archive found on the Woodbridge Public Library website I came across a bit of information about the early days of the State.

Plans for the construction of the future State Theatre were made public in a late August 1926 issue of the local paper. A person only mentioned by the name of Flynn purchased the property earlier in the year after recognizing its potential as a site for a theatre while passing through town.
Flynn advertised his purchase in the New York papers looking for interested parties and caught the interest of the Heller Construction Company of Newark who had, after investigation, agreed that the current population boom that Woodbridge was experiencing could support the building of a modern theatre in the downtown area. Applying for the building permit on behalf of Heller was the architect they hired, William E Lehman, who had his own firm in Newark. Lehman designed several theatres in the New Jersey-New York area; a list of the known ones can be viewed here. Lehman mentioned that his firm was currently building a similar theatre in Summit, which I believe would be the Strand , which also had retail and office space for rent to help meet maintenance overhead of the building.

According to the news report, the new theatre would seat between 1,800 and 2,000, measure 77 feet along its Main Street frontage and run about 176 feet in length. Initially it was supposed to cost $75,000, this figure was considered low by many.

In early 1927, Heller leased the still unfinished theatre to Mark Block, who applied for a permit to operate it in February. According to the local press, Block was active in New York theatrical circles and headed a company called The Block Amusement Circuit, which at the time consisted of theatres located in HighlandPark and Hawthorne.

The first mention of a name for the new theatre on Main St came in early June when it was referred to as the Lyric in an article. Within a couple of weeks, that changed to the State. It was also announced in June that the State would open in September.

When the Woodbridge Theatre shut its doors in July, Block was quick to hire owner-manager Nathan Marcus as general manager of the Block Amusement Circuit and manager of the State. Marcus, who was well known and liked in Woodbridge moved into the State where he took charge of renting the office and retail spaces.

The local papers were happy to publish all the hype that Block would pass on, the price of the building, all told had risen to $250,000, which may have been a bit inflated. This included a “Kloehs Unit Orchestra” built by the United States Pipe Organ Company which cost either $15,000 or $20,000 or $25,000 depending on which article you read. Another article was dedicated to the choice of the Heywood-Wakefield Company to provide new style seats that are rounded on the front rather than square and were originally designed for the Roxy in New York. Mr. Block was quick to point out that the Heywood-Wakefield bid was higher than other bids, but it was the quality and comfort that were the deciding factors. The aisle standards were fitted with lights to light the aisles, supposedly the first theatre in New Jersey to have that feature. The carpets were the same as used in the latest Shubert theatres in New York, the interior was designed by Margalotti Studio, who was in on the design of the Roxy in New York. A large sum of money was expended for electrical effects. The seating capacity originally supposed to be in the 1800-2000 range was lowered to 1,250 or 1,100, again based on what one read. A good idea of the true number would be the order placed for 1,200 seats.

The State opened its doors on September 19, 1927. Opening night festivities included the usual local and state level politicians and a talk by Miss Louise Glaum, a noted actress at the time. Telegrams of congratulations from the likes of Douglas and Mary Fairbanks, Norma Talmadge and John Barrymore, among others were read. On the screen the feature film “Alias The Deacon” was shown, along with a Charley Chase comedy “The Sting Of Stings”‘ a Paramount News presentation “The Eyes Of The World” and “A Technicolor Symphony” The Flag. The latter was a technicolor movie of a flag waving while the Star-Spangled Banner was played.

The following Sunday despite a law forbidding it, the State opened for business. The acting chief of police came by and warned manager Marcus that he would be arrested if there were any citizen complaints. There weren’t and Sunday movies came to Woodbridge. Marcus had tried the previous year to start showing Sunday Movies at his Woodbridge Theatre with no success.

Marcus resigned from his position with the Block Amusement Circuit in February of 1928 to take over a theatre in Newark. Block hired Harry A. McCormick of Roselle NJ as the new manager of the State.

In the Spring of 1929, the State made a show of turning into a movie house featuring talkies, their ads began to feature the banner “House Of Talkies”.

In mid June, the State closed for the summer. At the end of August, it was announced that Mark Block had disposed of his entire interest the State and it would re-open as a silent-only house under the management of the new lease owner, Harry McCormick. Ads began to feature the banner “The House Of Silent Pictures”. From reading several articles and one editorial, it would appear that, at best, profits were marginal for the operators of the State. Before the year was out, the State returned to featuring both silent film and talkies.

MarkP, I hope you enjoyed reading it as much as I did reading all the old articles. I remember seeing your post giving the date of the State’s going dark and picked its anniversary to post that bit, which I had been working on for a while. I don’t know if you saw the 1927 ad from opening night I uploaded the same time I posted the early history, but I did comment there that it was uploaded on the 43rd anniversary of the State shutting its doors. Perhaps the person who does the updates can correct the information in the overview to reflect when it closed, and that it was razed later that year. That would be closed on March 15, 1971, demolished September 1971.

Anyway, I have finally (thanks to a much younger coworker) learned enough html code to post links and hyperlinks here, I think you’ll like this one, something I found during a search of a data base of trade journals for mentions of Carteret.

Thanks walterk. That would be my dad. Thank you so much. Yes I always try to remember the old State every year. Its where as a 6 year old boy I fell in love with movies, which led to me being a projectionist for over 37 years.

New book on the story of the State Theater (and all the Woodbridge, NJ theaters) is now available on amazon.com:

Thanks for the heads up, I’ll be purchasing it soon. As I mentioned in a post above, I grew up In Carteret, but visited the State numerous times in my youth. Here’s a clickable link to the Amazon page:

I’m also uploading two 1929 ads from my collection that correspond to chapters 8 and 9, the beginning of sound pictures and the temporary return to a silent only policy.

As someone who has looked at the history of several area theatres, I’m looking forward to reading Mr. Hyatt’s book.

met Irv not long ago and gave him some insight as to how the 2nd floor was laid out. He, like you, is a very nice gentleman. I just ordered my copy yesterday. Btw, nothing much going on at the Ritz lately. Just passed by it on Tuesday.

Movie Trailer for the new book on the State Theater and other Woodbridge Theaters. Captures the flavor of the book which is available on Amazon, as well as telling the story of the State Theater’s 40 years.

The State closed on 8th April 1969 with “Doctor Dolittle”, starring Rex Harrison. Although subsequent adverts proclaimed it was “Closed for Alterations: Watch for Re-Opening”, it never did re-open.

Yes Dave, my father was the projectionist that night. He then moved on to the Royal in Perth Amboy until June of 1972, when he and my uncle moved to the brand new Jerry Lewis Twin Cinema in Carteret.

Many many years ago, 1966 to exact, my father who was projectionist here took me on the Friday after thanksgiving to see my first movie in a movie theatre, “The Christmas That Almost Wasn’t.”