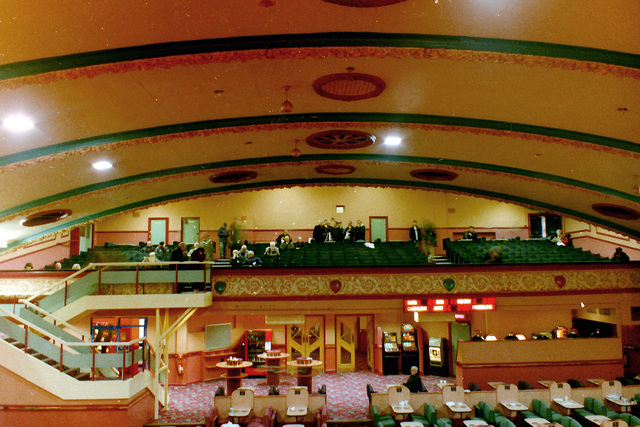 Located in the Walham Green area of the district of Fulham in west London, this opened as the Red Hall Picture Palace on 18th December 1913 with Len Bethel in “David Copperfield”. It was designed by architect H. George Leslie and the entrance façade was dominated by a figure of Mercury perched on top of a windmill shaped tower. Seating was provided in stalls and circle levels.

It retained the name Red Hall Picture Palace until 8th May 1950 when it was re-named Gaumont. The final film programme was screened on 8th December 1962, Jayne Mansfield in “It Happened in Athens” and Victor Mature in “Fury at Furnace Creek”.

The building was immediately converted into a Top Rank Bingo Hall, and was given a modern look on the exterior when sheets of metal cladding were placed over the original façade and the statue figure of Mercury had been removed. It was last operated as a Mecca Bingo Club and retains the original Beaux-Arts style decoration within the auditorium and the original façade still exists hidden from view behind the cladding.

Mecca Bingo closed in March 2007 and the building lay empty until December 2011 when demolition work began. The work was delayed several times, and was completed in April 2012. Housing was built on the site.

After over 45 years in operation as a bingo hall, the last game was played on Sunday 25th March 2007. Closure came in advance of new government ‘no smoking’ laws in public places which come into effect in June. There is concern for the future of this historic building which is not protected by any listed status.

Regrettably, this historic building was demolished a couple of years ago to make room for a block of flats. A plaque remembers it.