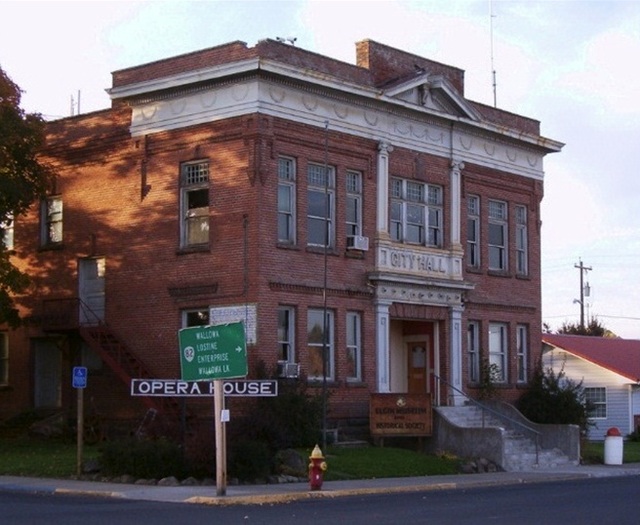 The Opera House theater, was included in the (Elgin, Oregon) City Hall building (proposed in 1911 and) built in 1912 by a contractor who bid $15,000. Nearly total restoration was done under the direction of, and funding of proprietor Russell Ford from 1985 to 1989; from 1989 through the mid-1990s several minor and two major improvements were made by Woodrow Kennedy and his family’s partnership.

From 1997 through 2004, Shirley Peters and her husband Jerry (a comedian and actor) were the proprietors the business. The Elgin Arts Council was a sponsor throughout those years. The City of Elgin paid for the installion of a new furnace and state-of-the-art rubber coverings on the three roofs of the building.

The Oregon Arts Council, Eastern Oregon Regional Arts Council and the Elgin Arts Council all contributed funds towards the Opera House restoration, with volunteer workers coming from the latter organization. Wallowa Valley Arts Council, Eastern Oregon State University, Union County Chamber of Commerce and Visitor Bureau, NE Oregon Visitors Association, and the Visitor and Tourism bureaus of the State of Oregon all contributed admirably through their supportive encouragement and publicity of the Opera House.

The Opera House has enjoyed television coverage provided by several Oregon stations based 300 miles away in Portland, Oregon. Unfortunately due to falling attendance in the late 90s and into 2003, the theater is no longer in use. The city has had the electricity and natural gas turned off, and the only occupants are the museum volunteers who give tours during daylight hours.

Approximately 80% of the new 100' x 50' brick structure was for theater use. At the front of the building on the second level the remaining 20% housed a jail (with two cells) in the basement. On each side of the theater lobby entrance, there was a city office (now a small museum) and a rental (presently a snack bar). Above that level (across the front of the building) accessible from an outside steel stairway, was a large meeting space used for city meetings and the City Library from 1950 through 1970. The latter space is now used for receptions, exhibits and meetings. In 1970 the Library was moved to a room built on top of the theatrical stage, from that time, until 1985 the space was occupied by the municipal City Recorder and Clerk. After that room was torn down, the stage reopened in December of 1987 on the 75th anniversary of a high school play; the female lead of that play gave a talk on the theater’s history during the evening variety show. Also on that night one of the original painted canvas backdrops was ‘unveiled’ on the stage; it had been discovered earlier that year; it had been found rolled up and laid on the ceiling above the movie screen (and adjacent to the ceiling of the aforementioned office space). Several hundred names can be seen on the back of the 18' x 36' canvas including the names and dates of traveling performers as well as show dates and titles with the names of local actors and actresses.

From 1988 through 1990 the basement dressing rooms (under the stage) were renovated; from jackhammering and pouring new concrete, to the installation of a bathroom and shower space.

From 1912 to 1950 (when a new school was built with a 500-seat theater) the Opera House was used for movies, school plays and graduations, local and touring live performance and bands, occasional boxing matches, and at times, political campaign speeches. While researching the history of the historic building, viewing the city’s newspaper The Elgin Recorder on ‘micro-fish’, it was learned that (not long after the 1912 opening) a future governor spoke to a gathering of the Ku Klux Klan in the theater space.

Movies began in 1918 from the original projection booth until the 1950s when the film industry went to the wide Cinemascope format. At that time a second projection booth was built in the middle of the uppermost balcony seating; that booth is currently used for movie projection and conttolling live stage lighting.

About that same time period, the two 6'x6'x6' boxseats (on each side and five-foot above the stage thrust) were removed. Their removal allowed for viewing of the wider movie format from the outside aisle seats, which couldn’t be sold for Cinemascope viewing. Restored in 1989-90 by (retired, local fabricator/welder) Woodrow Kennedy after ALL the pieces were found behind the walls of each of the boxseat interiors. At one point Mr. Kennedy said his volunteer labor was payment-in-full for all the movies he snuck into as a kid; movie admission in those days was $.10, which he did not have in the 20s and 30s).

The majority of the restoration work was done from 1985-88 by Russell Ford (whose first movie theater was 40 miles further east on Hwy 82) along with his (skilled trade) friends, acquaintances and volunteers. Mr. Kennedy’s daughter Christine McLaughlin walked in the side door in 1985 and asked what she could do to help; she served as a janitor for a brief period and then was promoted to manager where she served for 11 years (three years for Mr. Ford and the balance while she and her father took over the theater’s operation and restoration through 1996). From 1997 through 2004, two other longtime employees purchased the movie theater business; after one departed, Shirley Peters and her husband Jerry (a comedian and actor) were the proprietors of the business.

Hopefully more additions to this narrative description will be added in the future.