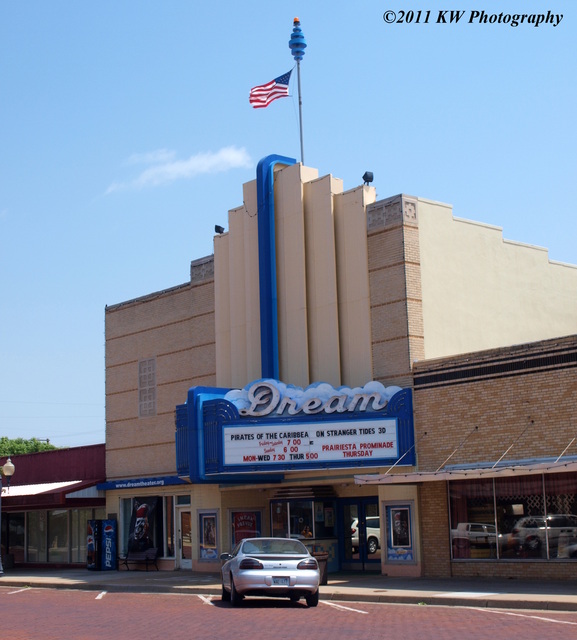 The Dream Theater in Russell, Kansas was originally opened on August 4, 1924 as the Mainstreet Theater. In 1935 it was renovated and renamed the Dream Theater with a seating capacity given as 590. In 1947, fire destroyed the old movie house.

Two years later, the New Dream Theater with a seating capacity of 425 was opened on the same site. For the next 51 years, the Dream Theater was just that – a majestic, Art Deco style single screen movie house delighting local audiences. The Dream Theater survived into the next century, but was finally closed in May 2000 by B&B Theatres.

As soon it closed, the Keep The Dream Alive Committee spurred into action, paid the $6,000 back taxes, and raised an additional $20,000 to reopen the cinema.

Now run by a volunteer staff and open only on the weekends, the Dream Theater is alive again.

Yes, that is correct about the Dream being in “Paper Moon”. But it is another building dressed up as the old Dream Theater. “Paper Moon” was filmed almost entirely in Kansas, mostly around Russell, Hays, Gorham, and Wilson KS, and many of the smaller towns in the area still had older 1930’s looking buildings still standing.

Robert R: In the 1980s as I was traveling to Colorado, I stopped in Russell and was lucky enough to get a tour of the Dream one Sunday morning. What I remember most about the inside were the floral murals on the walls. I remember them as stripes of gray and green and maroon flowers (almost wallpaper like in quality) but hand painted. The man giving me the impromtu tour told me that they were painted shortly after the theatre reopened in 47 and they did look late art-moderne in theme. The photo above does not show that the word “Dream” is scripted in the sidewalk area underneath the marquee.

This theatre has a very cool story.

As a youngster in the early 50s, I was a regular visitor at the Dream. It was the era of great Westerns with Roy Rogers and the rest. Roy was one of my childhood heros. We used to sit in the back and eat sunflower seeds. By the time the movie ended there would be sunflower seed shells all around the seats. I was too young to appreciate the beauty of the Dream.

Very nice I like the DREAM in the sidewalk in front of the boxoffice.

As I understand it, Danielson shot local newsreel films and projected those along with the theater’s regular showings. Does anyone have any information about that?

Visited the Dream recently – looks like they have a new electronic marquee since the previous photos (from 2011). New pictures uploaded to the Photo section.

The Wallis Brothers launched the MainStreet Theatre on August 4, 1924 With Rex Beach’s “Flowing Gold.” Audiences were impressed with the pipe organ, the special orchestra concert and the projection that had a new Gardiner screen and Simplex projectors.

The new theatre replaced their Isis Theatre that had launched elsewhere on Main Street in a new-build structure on May 5, 1911 by Edward Elza Smith and Earnest Maag. The Isis closed prior to the opening of the MainStreet.