UA Twin Cinemas A & B 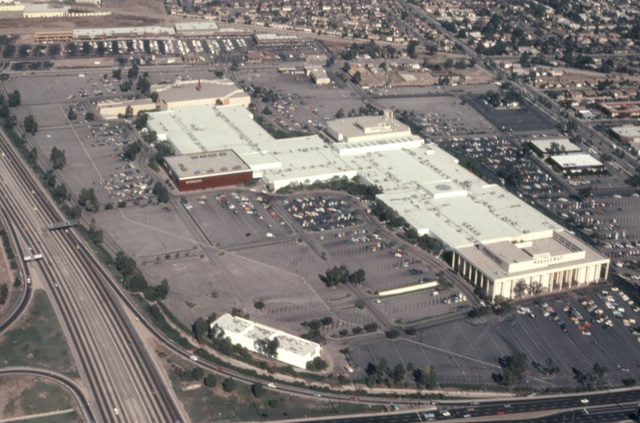 UA Twin-Cerritos, opening in 1972, was the second of three United Artists locations at Los Cerritos Center, a large shopping venue in southeast Los Angeles County. The UA Twin was a freestanding building on the outside of the center in its southwest parking lot, the address given was 11202 E. South Street. Spacious, it was officially designated UA Twin Cinemas A & B to distinguish it from smaller inside-mall screens previously opened as UA Mall Cinemas 1-4. Configurations similar to this one could be seen elsewhere in the 1970’s and 1980’s, particularly in suburban Southern Califonia. City Center-Orange, Grossmont Center-La Mesa, and Westminster Mall, for example, also once had big screen satellites opposite small mall ‘minimas’.

Cerritos Twin (as it was commonly called), was UA’s prestige house for the area, featuring 70mm 6-Track Dolby Stereo presentation, larger auditoriums and loge seating. 70mm engagements included “Ghandi”, “Ghostbusters”, and “2010”. The plush loge sections, located in the back rows, offered extra comfort and wider seats. However, they were more expensive. This two-tiered pricing structure was difficult for the ushers to enforce, irrelevant during slow times, and required cashiers to upsell at the box office. By the late-1980’s UA abandoned the policy. The seats of course, physically remained, but without an extra charge.

Unlike the Mall 4, the Twin was given periodic upgrades. The most extensive renovation took place in 1991. However, UA had also opened a new sixplex at Lakewood Plaza by then - Just a short distance down South Street. The Megaplex era was even more unkind. UA Mall 1-4 and the UA Twin Cinemas A & B closed, respectively in 1996 and 1997. United Artists Galaxy Stadium 11 Theatres, a replacement complex located elsewhere in the Los Cerritos Center, opened in 1998 (it too would close in 2014).

I have fond memory of this theatre. When “Grease” was playing in the smaller auditorium, I had the pleasure of ants crawling on my arm during the screening. On the top of that, a lady sitting behind me and my parents sung every single song, verbatim, from the film. Did we leave? Nope. We were enjoying the film too much!

I also recall my aunt offering to take me to see “Star Wars” there. We walked across the parking lot and peeked in the lobby. We could clearly hear the roar of T.I.E. fighters on the soundtrack. But since my aunt bought me the 45 rpm version of Meco’s “Star Wars Theme,” she didn’t have enough money for the show. Luckily I had already seen it at the Orange City Center in 70mm Six-Track Dolby Stereo, and that was perhaps the most memorable film experience in my life.

As for the Twin, it was renovated in 1991 and was quite nice. The large auditorium was accomodating and comfortable with a large screen. The theatre did run some 70mm at times during the 1980s and early 1990s. But like most theatres built in the 1970s, this one met with the wrecking ball and was covered with asphalt for the Los Cerritos Mall parking lot.

I was actually pretty sad when this was torn down with “upscaling” of the Cerritos Mall (marketing folk insist on “Los Cerritos Center”). As a kid I saw Star Wars (all three original chapters), ET, Superman, Elephant Man, Flash Gordon, Xanadu, and, waaay later, Pulp Fiction; the bigger screen and better sound was always in the left theater (whichever letter that was).

Architecturally, it was pretty bland. The ticket booth was basically front and center behind glass as you walked up to the front door, with the option to buy the more “luxurious” Loge Seats that made up the last 6 or 7 rows of the auditorium. The outside looked like a shoebox with rounded corners; large white stones- it kind of looked like a large Baked Alaska.

Just for the record, I saw Ghostbusters and 2010 at the UA Twin, both in 70mm six-track Dolby. A magical experience. But I have to say that the 70mm experience at the Lakewood Center Mall (“Temple of Doom” screening there) and the La Mirada Mall (“Star Trek III”), both Pacific Theaters, was more impressive. The UA Twin ran a very utilitarian 70mm experience, the sound was so-so. But who cares? Just a lot of fun. I also The Karate Kid here, among a few others, but that was in 35mm of course and on the second screen. By the way, I have distant memories too of the UA mall theater too where I saw Greystoke — not a great theater but whuddaya gonna do? ;)

I believe “The Gambler”,starring James Caan,played here in 1974. Or was it in the mall? I know i saw it in one of the two.

i loved this twin it was so damn busy when it had a hit I managed the fourplex in the mall and that was a nightmare . it was an old dark dirty dump, we opened at 9am when the mall opened and ran till 1am . all the hits moved over from the twin to the mall. I oversaw the twin Josephine was the manager she was green when it came to running the theatre. but a very hard working manager devoted to Untied artists.

Yeah John,nothing like running a nice twin theatre,If I had my way we never would gone the 30 plex route,I pity the manager,or managers today, It is not the same business we worked in the 70’s and 1983 when i fially had enough.

This was a good theater…but my friends and I tried to avoid it because it was impossible to sneak in to the other theater as they were separated by the snack bar.