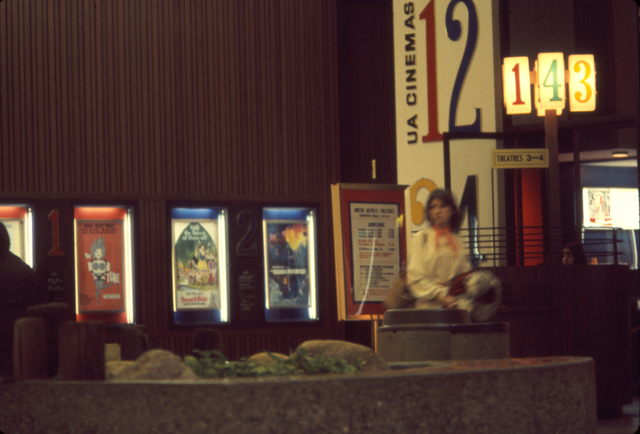 UA Cinemas-Cerritos was the first of three United Artists locations to open at Los Cerritos Center, a large suburban venue in southeast Los Angeles County. One of the first fourplexes, it opened with the center on September 15, 1971, the address given was 333 Los Cerritos Center. Inside an indoor mall corridor, the theatre was officially designated UA Mall Cinemas 1-4, to distinguish it from two additional screens outside in the parking lot that opened the following year (UA Twin Cinemas A & B). In earlier days of commercial development it was not unheard of to have two separate movie complexes (sometimes even operated by different chains) in different parts of the same shopping center.

Each of UA Mall 1-4’s auditoriums was minimalistic (like most multiplexes then): long and narrow, aisle straight down the middle and no premium picture or sound. With utilitarian paint and drapes, each auditorium was done in one of four primary colors: Red, blue, yellow or green. These colors were tied to the old ‘punch & fold’ ticket system in which colored, pre-printed tickets connected patrons to their auditorium (see photos section for details).

The four colors were echoed in the lobby (including giant numbers above the auditorium entrance doors) but carpet, panelling and fixtures made for a dark interior. Identical to UA City-Orange (across the line in Orange County), UA Mall-Cerritos had a no-nonsense layout: snack bar on the left as you entered from the mall and auditoriums straight ahead. There was also an open-air satellite box office (out front in a foyer of poster cases).

UA Cerritos Mall (as it was colloquially known), though inelegant, performed extremely well. With busy traffic and fun amenities of the surrounding center, it had high energy and volume. Strongly booked, it sold out frequently. Morning shows ran daily. Cerritos Mall was the perfect place for children’s fare, horror movies, cult favorites and teen audiences. In the late-1980’s, UA Mall still out-grossed larger and newer complexes (even driving its closest competitor, AMC Alondra 6, into sub-run status). Both the Mall and the Twin, however, were eventually supplanted. In 1998 the UA Galaxy, an eleven screener with stadium seating, opened elsewhere in the center.

This was a great place to work in the mid 1980s. I was the last union theater technician to work in Southern California.

Hey, that did not bother me because I was about to become a radar air traffic controller at ZLA, the air route traffic control center in Palmdale, CA. Finally, UA fired me, but two weeks later, I was at the FAA academy in OKC, OK.

What was cool about this place is that it had Norelcos to run 70mm in a four-plex. Yes, 70mm and six-track Dolby stereo. Man, that had to hurt AMC, also in the mall. Why? AMC only had 35mm and mono sound. Ouch!!!

I managed this dump ,for 6 months it was really a grind house it opened at 10 am and ran 1045pm shows in the evening, UA didn’t spend a dime on this place the twin was in the parking lot, my friend Josephine was the Manager of the twin, it was a lot nicer than the 4 plex in the mall and it had great sound and 70mm, it played all the big first run films and then they moved them to the mall after they were dead. Marsha Naify was the District Manager any one know where she is? still in Long Beach?

When I was there, Josephine, an Asian lady, was the DM and Naify was back up to San Francisco.

Zubi, You are right! I was thinking of the Twin out in the parking lot. Whoops! Honestly, I have worked at so many theaters that it is hard to remember them all. I have a newpaper clipping with me holding a “UNFAIR” sign and standing outside with other brothers in a photo when we were striking. hahaha. Then, I got my job back as a technician, not a projectionist. Well, for a while anyway. tee-hee. Man, I need to dig that out that article and reminisce.

Thanks for the clear-up Zubi!

Um, wonder what the Naify’s are doing today???

First time I went to this theater was as a kid in the 70s for a James Bond triple bill…Dr No, From Russia With Love, and Thunderball.

I worked there for a few months in the early 80s (late 82 I think) when the manager was Mr. Tarantino (probably Tarantex?). This was also at the same time as the projectionist strike Meredith is referring to. I used to help the manager and assistant managers with running the projectors.

I also worked for Josephine when I first started earlier in 82 at the UA Marketplace in Long Beach when she was the manager there.

I was there in 79/ 80 I loved Joesphine she was so Damn nice Didn’t speak good English but she tried, She was Sharp, I helped her run the Twin , and taught her how do handle crowds, the thing I liked most she wasn’t afraid to get dirty if something broke, I am glad she made it too District Manager Where is she now?? I know Marsha got married shes so Happy now, Those were Fun Times in the olden days.

The finish line store that took the place of this theater right after it closes has moved to another part of the mall. The door to this space was left open this past week and you could stare right into the old theater space. It has been gutted again. What’s going in now who knows.

Now that I think about it…I think my the manager at this theater in 1982 last name might have been Taramino (sp?) and not Tarantino.