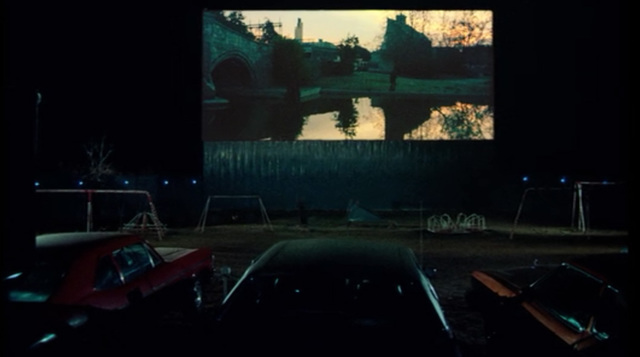 Locared in Arlington to the south of Riverside. The Magnolia Drive-In opened in 1950 and was operated by Cooperative Corp. By 1952 it was operated by the Santa Fe Theatre Corp. and Judy Poynter. It was closed in September 1984.

I’ve been unable to find any listing for a Magnolia Drive-In in Riverside in either 1971 or 1986, the years for which I have copies of the Los Angeles Times theatre listings.

Also, there is no Magnolia Boulevard in Riverside, which is why the Google map link gives an error page. The correct street name would be Magnolia Avenue.

OK, I found the place listed in the Times for 1971, under Independent Drive-Ins. It was located in Arlington, which I believe was an unincorporated community which was later annexed to the City of Riverside, sometime after the theatre closed. (Somebody will have to double check this— my knowledge of areas that far east of L.A. is hazy.) According to this page about it, the Magnolia was on Magnolia Avenue between Tyler and La Sierra, it opened in 1950 or 1951, closed in September of 1984, had a capacity of 450 cars, was operated by Santa Fe Theatres, and it has been demolished.

I saw “Macabre” & “The Ten Commandments” there..no not on the same bill,

I was the Union relief Projectionist back in the 80’s. The last full time Projectionist was a Union man by the name of Don Shimshock. I lost contact with most of the Union men because local 577 folded sometime in the 90’s. I do remember that the projectors were Simplex E-7’s and we still ran 20 minute reel to reels, Panatar Scope lens and Carbon arc Lamp houses. I think the last movie I projected there was Richard Pryor’s “Live on the Sunset Strip”.
Limelight

The Magnolia Drive-In was one of at least five Southern California drive-ins opened in 1950 that had been designed by Los Angeles architect J. Arthur Drielsma, according to an article in the March 18, 1950, issue of Boxoffice Magazine. The original owners of the Magnolia were Frank Berrson and Walter Dennis. It was to have a capacity of 475 cars, according to the Boxoffice article.

Now a police station on the site of a former Costco.

In I think 1982 we went to see Cheech n Chong Festival:3 movies shown here, there was a 5 car pile up at Polk and Magnolia before the show. They closed the Drive in Snack bar to treat wounded people, from hammer fights. My mom drove her 74" Lincoln out as the police helicopter light lite up the way. Good times.