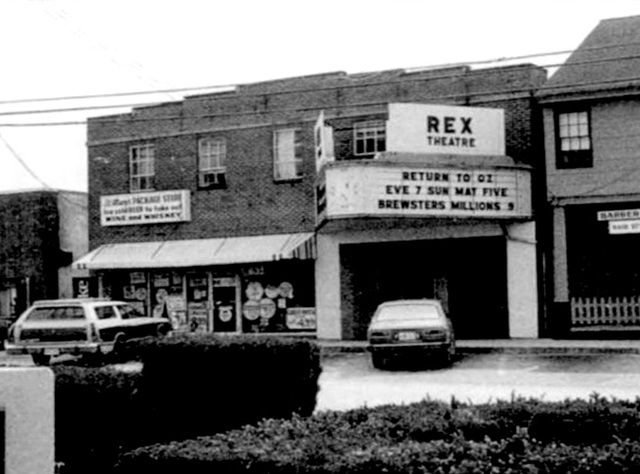 Located in Leonardtown Square, the New Theatre was opened December 10, 1941. It was later renamed Rex Theatre and was closed in 1986. The building remains, currently used as a restaurant. Any anecdotes or further information would be welcome.

A book called Johnny Briscoe, A Great Life, by Samuel C. P. Baldwin, Jr. (PDF here) has information about the theaters in Leonardtown, and photos of the New Theatre. Kenneth Duke opened the New Theatre on December 10, 1941. He had been operating a theater in Leonardtown since early in the silent era, first in the former Town Hall and then in the Duke Building.

The plans for the New Theatre were announced in the January 3, 1941, issue of The Film Daily:

“Leonardtown, Md. — A new film theater is to go up here and plans have already been completed for it, it is announced by Kenneth Duke.

“House will be a community project and is to have Colonial style for its motif, in keeping with local historical traditions.

“The theater will have the most advanced type of equipment.

“Plans have been prepared by John and Drew Eberson, film architects in New York City.”Judging from the look of the building and from the appearance of the auditorium in Google’s satellite view, the auditorium was a new structure built behind an existing building that was remodeled to accommodate the theater entrance.

I haven’t been able to discover when the New Theatre became the Rex Theatre, but an article dated October 17, 2014, posted at Gazette.Net said that the former theater had recently been converted into a bar and restaurant called The Rex in honor of the old theater. The article also said that the Rex Theatre had closed in 1986.