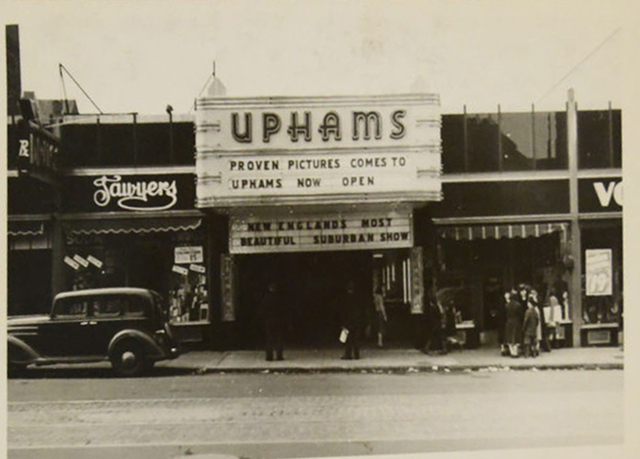 The Uphams Theatre was located at Uphams Corner in the Dorchester section of Boston. It was a conversion of an existing building and opened April 12, 1941. It was constructed by Fred Lieberman’s Proven Pictures chain, but went over to M & P Theatres. It was across from the big Strand Theatre in Uphams Corner.

It’s possible that it may have been decorated inside in Art Moderne style. It had a rectangular marquee below which were 2 sets of double doors with a box office on the right. All seats were on one floor. Under the marquee and just above the entrance doors was a rectangular attraction board with two lines of black letters on a white background. For a while after the Uphams opened this board proclaimed: “New England’s Most Beautiful Suburban Show”. This slogan used the word “Show” to mean “Theatre”. And it’s highly doubtful today if one would refer to the area as “Suburban”. The Uphams was located near another old movie house, the Winthrop Hall Theatre. It had 500 seats and was an 1890s adaptation of an old meeting hall. It was used originally for vaudeville and minstrel shows and then silient films. As of 1927, it was still open daily for movie shows. But it had closed and the building converted into other uses by the time the Uphams Theatre was opened by Fred Lieberman’s company. Does anyone know when the Uphams closed? I’m fairly certain that it was gone by 1960.

The Dorchester Atheneum lists it as: “Uphams Corner Theatre, in Winthrop Hall, Uphams Corner at the corner of Columbia Road and Dudley Street across from the Strand.”

The theatre was called “Uphams” both on the marquee and in its listings in the M&P/Netco ads, and not “Uphams Corner Theatre”. It could have been located in the old Winthrop Hall Building. That building was 5-plus stories high, with a gable and tower. But it was eventually converted into a shorter building. It was right next to the big Columbia Square Building, a landmark in Uphams Corner. By the 1980s, the Winthrop Hall Building housed the First American Bank. I simply don’t know if that’s where the Uphams Theatre was. Donald King told me that he heard tht Fred Lieberman had created the Uphams Th. out of an existing building which he thought had possibly been a garage. It’s address, by the way, as listed on the MGM Report card is at 568 ½ Columbia Road. Why the “½” ?? Who knows, today!

Show showing the marquee and entrance from a distance from 1948: View link

The marquee on the Uphams in the 1948 photo is the same one which the theater had when it opened.

In the Street View photo above, the entrance to the Uphams Theatre was located approximately at the left part of the one-story building and where the open metal gate is.