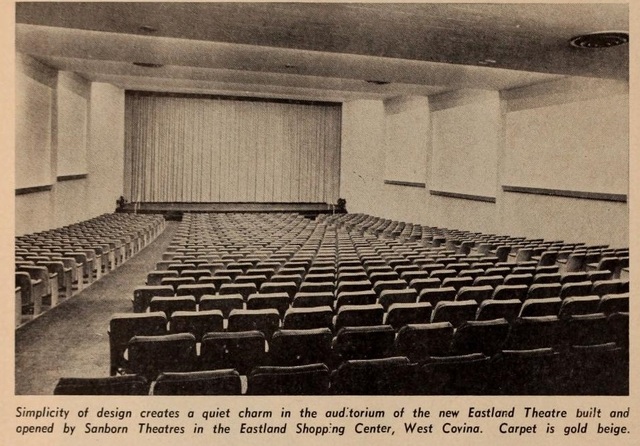 The Eastland Theatre opened by Sanborn Theatres on November 15, 1961 with John Wayne in “The Comancheros”. It was tripled on February 20, 1976. Back in the 1970’s and 1980’s this was the place to go, if you wanted to see a new release in 70mm. Screens 1, 2, and 3 were all equipped to screen 6 track Dolby stereo, 70mm films. Three large auditoriums with giant clean screens and good Dolby sound. On June 19, 1981 it became a five-screen complex. I do remember one auditorium, it might have been theater 5, it was so small, that were you walked into it, you felt like you were inside a closet with a screen.

In the 1980’s when most of the new releases would come out in 70mm, most of the time, the Eastland would present them in 70mm. Films that I saw there in 70mm included “Close Encounters”, “Tron”, “Die Hard”, and one of the many re-releases of “Star Wars”.

The Eastland was demolished in February 2006.

Here is a May 1970 ad from the Pomona Progress-Bulletin:
http://tinyurl.com/ygnmmk6

When did this theater stop showing films? I see it was demolished in 2006, but I assume it was dormant for a while between shut down and demolition.

I was working on an old VW bus I imported from California to the UK and found a used cinema ticket stub for Eastland. Did some Googling and found myself here :) I wonder what the ticket holder watched ? it has an issue number 138330 although I don’t suppose there are any records :|

Still waiting for “I’m sorry, you were right about The Temple of Doom, playing in 70mm' Even after all the crap this person posted about my memory. And making me look like I didn’t know what I was talking about.

I am glad to see the post stating that I was wrong about The Temple of Doom playing in 70mm saying I was wrong and I made it up. This used to be a mean and nasty site to post comments on. Thank you for deleting that post. I am from West Covina and I almost lived at the Eastland theater. I hope I can come back here and read about some of the best movie theaters that I used to go to as a child and teenager.

Another grand opening ad from the Progress-Bulletin posted.