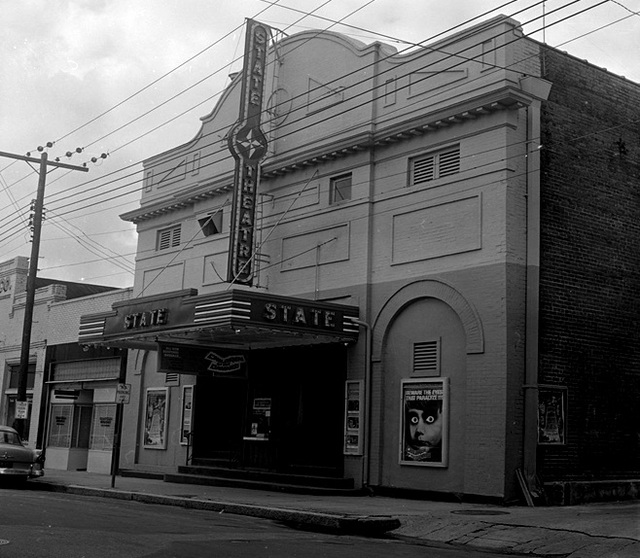 This theater was used up until the mid-1990’s when Carmike Cinemas built a megaplex in town. Carmike then purchased all of the small theaters and attached a deed restriction in order to avoid competition. It’s unfortunate that a building with such history is no longer allowed to be used as it was originally intended. Thanks Carmike.

In November 2016 renovation work began to convert the building into a concert venue. A new marquee was installed on August 24, 2018 and it is planned to reopen on September 18, 2018 and will be renamed State Theatre.

This was my first job in my lifetime career in the movie theatre business. I ushersd and popped corn in one of the dressing rooms below the stage. I later became a projectionist in the booth consisting of two “Century” C projectors with 2000' enclosed film magazines. The booth was quite compact as it was designed for nitrate film. The toliet was directly ajacent to the sound rack. The “Strong” 1KW carbon lamps would require constant attention to maintain proper light levels. The tungar bulb rectifiers sat directly benneth the 5 Point pedestals. The booth was extremely hot in the summer. Salvation from the heat was rendered by a window looking out over the covered overhang. The theatre also featured the vertical “STATE THEATRE” logo with the chasing lights. I can remember running cartoons,and travelogues prefeature,also running the national anthem at the days conclution. Cutain calls were a standard of the day as well.Intermission mucic was rendered by phonograph records. The days prior to xenon lighting, automation, and film platters were quite busy, all for $0.75Hr.

During the 60’s the boxoffice was a single window enclosed booth located in the center of the entrance stairs leading up to a very small lobby and concession stand. Popcorn was popped in a dressing room benneth the stage. This was originaly a vaudeville house.Soft drink syrups were packaged in one gallon waxed paper cartons. Popcorn was sold in boxes $0.10ea Posters and banners were much larger than the one sheets used today. I remember selling out to capacity crowds for “Dr. Zhivago”.

In the 70’s a major renovation was undertaken to update the theatre to the trend of the day. The building interior was removed down to ground level. The only thing still remaining were the exterior walls and the roof. A very 70’s looking facade replaced the original exterior front end. A new upper floor replaced the original balcony,creating space for office, storage, and projection booth. The original wood floor was replaced with terrazo floor in the lobby and sloped concrete in the single auditorium. Xenon Lighting now would allow for use of a single projector which was mounted with one of the original “Century” C projectors onto a “Unicinema” Reel to Reel transport. This device allowed the entire movie to be assembled on a single reel. An average length movie consisted of six 20 minute reels spliced together. This device was so large and heavy the unit was placed with a crane and the construction done around it. After the renovation the theatre name changed from the “STATE THEATRE” to the “PARK”. The “Unicinema” device was one of only a few ever manufactured. The development of the platter system gained favor as it did'nt require rewind of the film.

I remember the Park Theatre very well. In the late 1980s when I hung out in downtown Greenville the Park was my preferred destination. I liked the vintage 1970s' pink and purple auditorium, and I loved the rocking chairs. The Park had the largest screen in Greenville at the time, perfect for watching slasher films such as “Nightmare on Elm Street 3” and “Shocker”. In 1990 the Park showed a first-run feature for the first time in over ten years, “Def By Temptation”. It was a Troma film, which normally would have played at the Plaza Cinema; it was also the last first-run film shown at the Park. In the early 1990s Carmike removed the rocking chairs from the Park Theatre, replacing them with cupholder seats. The Park closed in 1998 after the Carmike 12 opened; cheap movies moved to the Buccaneer 3 on Arlington Boulevard.

Is the seat count listed for the Park from the 1971 S&E remodeling or the early 1990s seat replacement by Carmike? There must have been more seats when it was the White’s and the State, as the seat count given for the Colony Theatre around the corner on Evans Street is 800. The Colony was much smaller than the State and Pitt theaters; the State’s seat count was probably closer to the 999 seat count of the Pitt (that theater’s seat count was reduced in a late-60s or early-70s modernization which closed its balcony).

White’s Theatre was built by Samuel Tilden White, who owned the theater from 1914 until 1926,at which point he sold the theater and eventually opened White’s Department Store on Dickinson Avenue. Publix-Saenger took over White’s Theatre in 1930, remodeling it and renaming it the State Theatre. Wilby-Kincey/North Carolina Theatres took over around 1933 as part of Paramount’s bankruptcy reorganization. The State Theatre closed in 1956 (due to television and drive-ins). Stewart & Everett reopened the State in 1960; in 1971 S&E remodeled it and renamed it the Park. About 1982 the Park became a $1.50 second-run theater and continued as such after Carmike took over in 1986. Carmike raised weekend prices (Fri-Sat-Sun) to $2.00 in 1996; this policy lasted until closing in 1998.

The former Park Theatre is currently being renovated into a live performance venue, primarily for music concerts. It will be operated by the owners of Raleigh’s Lincoln Theatre.

A new marquee was installed today on this theater, which has reverted to the name “State Theater”. An opening date of September 18, 2018 has been announced, although there have been delays in construction. The owners of Raleigh’s Lincoln Theatre will also operate the State.

The State Theatre is open as a live music venue.

Picture of the State Theater in 1961 East Carolina University yearbook: