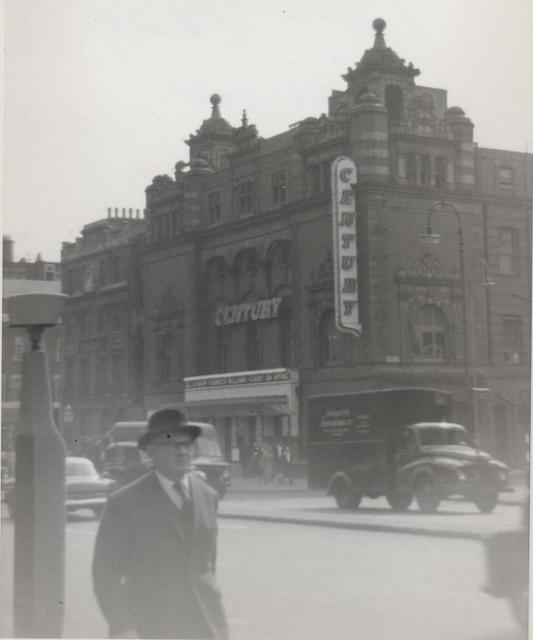 Opened as a live theatre known as the Euston Palace of Varieties on 26th December 1900. It had a prime position on Euston Road at the corner of Tonbridge Street, directly opposite St. Pancras Railway Station in the north London inner-city district of Kings Cross. The architect’s were Bertie Crewe, together with Wylson & Long, all well known at that time for designing theatres in the United Kingdom.

Seating was provided for a capacity of 1,310, located in stalls, circle, balcony and two side boxes on each side of the proscenium at dress circle level.

It went through a couple of name changes early on; Euston Theatre and Euston Music Hall before becoming the Regent Theatre in the 1920’s. In 1925 it was owned and operated by Variety Theatres Consolidated Ltd (VTC) and Cecil Bernstein (brother of Sydney Bernstein) of Granada Theatres Ltd. became involved.

Architect Andrew Mather made some alterations for conversion to cinema use in December 1932 and from 14th October 1935 it became a full time cinema operated by Associated British Cinemas (ABC) remaining with that chain until 24th December 1949 when an Independent operator took over.

The Granada Theatre’s chain took over from July 1952. Improvements were carried out by architect Leonard Allen with interior decoration by W.F. Mudd and it re-opened 13th September 1954 as the Century Cinema.

It was re-named Granada Theatre from 6th May 1967 but closed on 4th April 1968 with David McCallum in “The Heroin Gang” (aka “Sol Madrid”) and Deborah Kerr in “Eye of the Devil”. The building was purchased by the local Camden Council and an extension of the Town Hall was built on the site.

After closing as the Granada Cinema, it was converted into a Granada Bingo Club which was opened on 1st May 1968 by pop singer Joe Brown. The bingo operation was short lived and closed down in 1969. The new extension to the Town Hall that was built on the site was officially opened in 1977.

Here is a photograph of the Century Cinema that I took in 1964:
View link

Century was the name which Granada gave to their lesser cinemas, particularly when they owned two in the same vicinity, such as at Slough and Cheam.

I started school in 1954 at Argyle Infants School King’s Cross, which was directly behind this cinema and accessed via Tonbridge Street to the right hand side of the cinema (now closed off and redeveloped).
From 1954 – 1958, I regularly attended Saturday morning ‘pictures’ at this cinema, which I always knew as the ‘Granada’.
Indeed, before each performance, the cinema organ would rise in front of the stage and we would all sing our own song –“We’re one for all and all for one, the King’s Cross Granadiers…..”, to the tune of the “British Granadiers.
I can still hear the hurrah’s for the good guys and boos for the bad, when they played films such as "The Lone Ranger” and “Batman & Robin”.
Any other King’s Cross Granadiers out there?

During the 60’s, I lived only a few hundred yards away in Birkenhead Street. At that time, the Regent had become a cinema and was called The Century Cinema. I’m not sure when this happened, but perhaps it was in the late 50’s. Anyway, I was a regular there up until the late 60’s. The last film I saw there starred Bette Davis (Dead Image, or Dead Ringer in the U.S.) and if I remember rightly, they showed mostly old films, or at least, old-ish stuff. Another film I clearly remember seeing at the Century was a piece starring Brandon de Wilde, Carol Lynley, Macdonald Carey and Marsha Hunt. It was called Blue Denim in the U.S., but Blue Jeans in the U.K. and was a story about teenage pregnancy and abortion – quite a daring subject at the time. The cinema was down at heel and had obviously seen better days and I think fell into disuse, either in the late 60’s or sometime in the 70’s. It lay empty for some years, before, sadly, being demolished to make way for the hideous council building, unfortunately still extant.