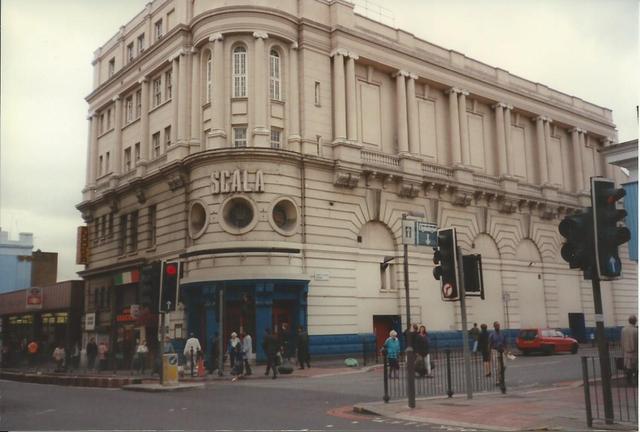 Located in the north London inner-city district of King’s Cross close to the mainline King’s Cross Railway Station. An imposing and partially blind facade conceals a rather more prosaic brick box of an auditorium with an asbestos roof.

Built to the design of architect H. Courtenay Constantine beginning in 1913, the start of World War I halted its completion and it was used to manufacrure aircraft parts. In 1919 it was in use as a womens employment exchange. It eventually opened on 26th April 1920 as the King’s Cross Cinema. There was an eleborate wood carved fireplace in the circle foyer and seating in the circle was very steeply raked. It was equipped with a ‘straight’ Hill, Norman & Beard (Christie) organ which was opened by organist G.T. Pattman. Organist Reginald New was the resident organist from 1926 to 1928. The cinema boasted a 20-piece orchestra. Around 1929 it was equipped with a RCA sound system.

The King’s Cross Cinema was closed on 8th May 1949, to repair damage done by German bombs during World War II. Extensively altered in 1949 to the plans of T. P. Bennett and Son, the auditorium was given a Streamline-Moderne look, but the exterior and foyer areas remained untouched. It was re-opened as the Gaumont on 17th March 1952. Re-named Odeon 25th November 1962, the Rank Organisation closed the Odeon on 22nd August 1970 with Burt Lancaster in “Airport”.

It re-opened on 22nd February 1971 by the Cinecenta chain as the Cineclub, screening uncensored adult films, but that was a short lived venture and it closed on 21st July 1971 and Cinecenta re-named it King’s Cross Cinema from 22nd July 1971, playing regular release films. All night concerts were held featuring artistes such as Iggy Pop and Hawkwind. It lost its late-night licence due to noise complaints by its neighbors and the cinema was closed on 29th March 1975 with a Clint Eastwood double bill: “The Good, The Bad and The Ugly” and “A Fistful of Dollars”. The building stood unused for five years until 1980 when it was converted into a Primatarium, displaying a series of tableaux and films depicting the evolution of apes and a real waterfall was installed in the auditorium which was decorated to resemble a rain forest. This venture was not successful. The stalls seating area was converted to a snooker hall.

In 1980, the operators of the Scala Cinema Club had been ejected from their home on the site of the old Scala Theatre on Charlotte Street, and the former circle was extended forward to the proscenium and it reopened on 9th July 1981 as the 350-seat Scala Cinema. The opening programme was the classic 1933 version of “King Kong” & “Mighty Joe Young”, and the Scala Cinema quickly became a successful ‘art-house’ repertory venue. Especially popular were its all night screenings on the weekends.

Sadly, the Scala Cinema was closed in 1993, after the operating company had gone into receivership, caused by court costs in a battle with director Stanley Kubick. It all happened after they had screened “A Clockwork Orange” illegally, as Kubrick had withdrawn screening rights in the UK, due to bad publicity over gang behavour on its initial 1971 release.

The building is now in use as the Scala nightclub, with concerts and live performances using the space which was originally the circle seating area, now repurposed into a three level space. For a while a church used the former stage area, and the snooker club still occupies the former stalls area.

Overshadowed for many years by the King’s Cross regeneration scheme, the future of this building was uncertain, although the 2008 regeneration of St. Pancras Station as an International Eurostar destination and the restoration of King’s Cross Railway Station in 2013 has brought more respectable life into this once seedy area of the inner-city.

CORRECTION
This building has been open since 1999 as the Scala nightclub and it hosts a lot of varied and very successful evenings and has regular bands performing there.
The nightclub is built in the stalls area and has a separate main dancefloor and stage in the former balcony area and a third dance floor upstairs in what would have been the cirlce lounge/projection rooms.
As you can imagine none of the auditorium decor has survived and the building has gone back to the bare brick, the only remaining areas of interest are the enterance lobby with its terratzo flooring and the staircases that go up the curved corner of the building which retain some plasterwork and decorative metal railings and grills.
Externally the building has been restored and looks wonderful at night with the circular windows picked out in blue neon.
As a point of interest the last film show at the Scala was “a clockwork orange” and this was during the time it was banned in the UK and was the reason the Scala closed.

A couple of nightime shots from 2006 here:

Another couple of exterior shots taken in 2010 here:–

TomJensenMorganfromAustinTexas on October 31, 2014 at 3:10 pm

I spent most Saturday nights there during the academic year 1985 to 1986. I saw my first Tarkovsky movie “Stalker” there. Some of my happiest memories from my time in London were formed in the all-night screenings at the Scala, drinking Long Life and eating cold sandwiches.

Do’s anybody know the date the Theatre was bombed during the second world war Please .. I am trying to do research on the subject..

The Scala has a rather splendid new lighting scheme at night – photo taken January 2018:–