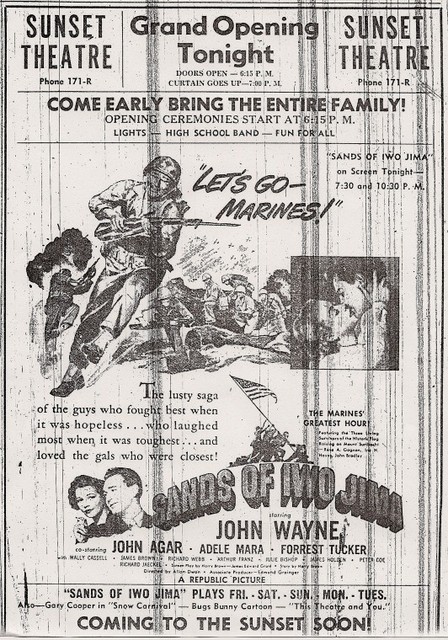 Opened by T & D Jr. Enterprises on January 20, 1950 with John Wayne in “Sands of Iwo Jima”. The Sunset Theatre had a rather distinctive vertical sign above a large rectangular marquee and was identical to the Ritz Theatre, Hayward, CA & the Tower Theatre, Willows, CA. The Sunset Theatre closed in 1997.

Here is another view of the Sunset:
http://tinyurl.com/cfd824

Lodi also had a Lodi Theatre and a State Theatre operating in the 1940s and 1950s. From brief items in various issues of Boxoffice, I’ve found that the State had 400 seats, closed in 1954, and was last operated by Fox West Coast after being operated for some time by T&D. I haven’t yet found any other details about either of them.

The Lodi Theatre has been demolished and replaced by a modern post office building, but the State Theatre’s building is still there. It is now occupied by a banquet hall called The Merlot. The give their address as 23 W. Elm, but it’s the same building. The Merlot’s web site says the State opened in 1912 (the building looks that old) and was owned by Paramount Pictures (local urban legend, most likely. The State probably just had a contract to run Paramount releases at some time in its history.)

Neither the Lodi nor the State is here yet. I was going to submit them last night but got distracted. In the meantime, I found a couple more references to the State in Boxoffice. It might have been operating as late as 1956.

There are also items about a Midway Drive-In in Lodi that opened in 1949, and a Tokay Drive-In which changed owners in 1955. I don’t know if these are actually the same theater with a name change, though. There was no address given for either.

Unless there has been some recent activity, the Sunset is still there. Status should be changed to closed.

Everytime we passed by this theater, we thought of the Ritz theater in Hayward. They both looked exactly the same, marquee and everything except that the Ritz marquee was green, and the letters spelling ritz were in red.

A 2011 photo can be seen here. Funny enough, best shot during sunrise.

Today, however, the once grand theater’s peeling paint and lonely, neglected appearance are telling signs of the building’s sad emptiness for the past 13 years. Closed in 1998, 48 years after its grand opening, the foreclosed building at 1110 W. Lodi Ave. was finally put up for auction this week. No one made a bid, and the building still sits unwanted. But in its day, the Sunset was the big attraction in Lodi. The first movie theater in Lodi was the New Ideal Motion Picture Theater, which opened on March 5, 1908 on North School Street. Over the next decade, several small theaters opened to show silent movies accompanied by piano players, but many closed quickly.

After World War II ended in 1945, Lodi grew quickly. The population expanded into new neighborhoods to the west. Businesses, once centered in the Downtown blocks, slowly began building the new innovation of the time: shopping centers. After the war, people loved their cars and wanted to park close to where they shopped. Parking Downtown was limited, so markets and other businesses began moving away from Downtown and closer to where people lived.

Just as grocery stores and other businesses were relocating, T & D Enterprises wanted to build a new theater away from Downtown.

On November 1, 1948, construction on a new theater started at 1110 W. Lodi Ave., next to the parking lot of Sunset Market, a sister store to Turnage Market located Downtown at Pine and Church streets.

The theater was built to be “one of the finest in the San Joaquin Valley,” according to the Jan. 13, 1950 Lodi News-Sentinel. It had 1,000 comfortable seats, all with a good view of the screen behind the “most modern curtain in the state.” The interior of the theater was treated with acoustic plaster to enhance the sound. The projection room featured E7 Simplex equipment, Altex Lansin Simplex Mirrophonic sound and high intensity arc lamps. The theater cost $150,000 to build.

A week before the grand opening, Don Nichols was named the Sunset Theater manager. Nichols was a Lodi native who served in the army and had been working in theaters in Merced, Lindsay and Turlock.

The grand opening was set for Friday, Jan. 20, 1950. T & D Jr. Enterprises, the company that owned all three theaters in Lodi, ran big newspaper advertisements for the Sunset’s grand opening and for movies playing Downtown at the Lodi Theater on School Street and the State Theater on Elm Street.

The gala opening of the Sunset was an event of theatrical proportions. The new Spudnut Shop, located at the theater, also held its grand opening that day. Owner Hassen Mosri gave away free coffee and Spudnuts, a kind of pastry made from dehydrated potatoes, from 2 to 4 p.m.

By the time the Sunset Theater doors opened at 6:15 p.m., there were 2,000 people gathered. Of that number, about 1,250 were in line to see the first movie, “Sands of Iwo Jima.” The crowd included executives from T & D Enterprises and city officials.

In a salute to the U.S. Marine Corps portrayed in the epic World War II battle movie, the opening had a military flair. A 14-ton amphibious tractor like the ones shown in the Republic Pictures movie was on display in front of the theater. The Marine Corps Color Guard started off the function with the flag presentation, headed by 1st Lt. Joe B. Crownover, inspector/instructor at the Naval Supply Annex in Stockton.

Lodi Mayor Robert H. Rinn had the honor of cutting the ceremonial ribbon for a new business. In this case, however, Rinn cut a symbolic ribbon of motion picture film to open the theater. Accompanying Rinn were City Manager H. D. Weller and Don Dickey, secretary-manager of the Lodi District Chamber of Commerce. With the ceremony complete, theater patrons took their seats and watched the curtain open at 7 p.m. for the first-run movie starring John Wayne.

For more than a decade, Lodi had three movie theaters. The Sunset and the Lodi Theatre showed first-run movies, and the State specialized in westerns, foreign and older films.

In the early 1960s, however, Downtown Lodi lost its vintage movie theaters.

In November 1961, Jerry Dean converted the State into a dancing hall. On June 30, 1962, the Lodi Theatre caught on fire. The theater was demolished and never rebuilt, ending a long run of 54 years of movies in Downtown Lodi.

In 1998, the Sunset Theater closed when the owner failed to make mortgage payments, and it remained empty from that time to today. Three years later, Lodi Stadium 12 Cinemas opened Downtown.

(From Vintage Lodi, a local history column that appears the first and third Saturday of the month.)