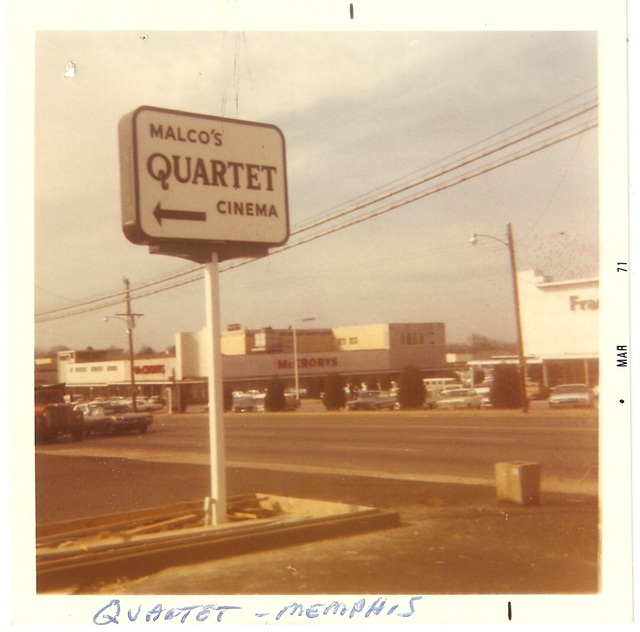 Malco Theatres opened the first multiplex theatre in the region at S. Highland Street and Poplar Avenue in 1971. It was simply known as Malco’s Quartet Cinema. It lasted through a proliferation of multi-screen cinemas partially due to its proximity to the University of Memphis. It once had in its lobby the prototype to the ‘Hollywood Stars’ mural in the Ridgway Four Cinema. Malco’s Quartet Cinema closed in 2005. No trace remains and the space is now a restaurant.

The Quartet’s floor plan was pretty conventional except for one small oddity. Of the conventional parts the lobby was long, narrow and two stories tall. The four auditoria were on the right as you entered. Important as it is in any theatre, I don’t remember the candy counter at all. At the very end of the lobby was a small pair of restrooms. Here’s the odd part: there was public stairway at the far end of the lobby. Turns out there were additional public restrooms on the upper level – up there with the projection booths. There were no balconies in the Quartet. Of course, in many old movie palaces the restrooms were down a level, but I don’t think I ever saw another theater where they were up a level.

People who remember the Hollywood Stars collage at the Ridgeway Four do not remember its predecessor which was the focal point of the Quartet. It was removed many years ago the first time Malco tried to retire the cinema (U of M students kept it open for a while).

My buddy Jeremy and I went to the last show at the Quartet. We saw “Munich.” The manager let us snag the poster. Got Cybill Shepherd’s autograph at the concession stand when she was in town promoting “The Last Picture Show.” Used my fake ID to get into dozens of R-rated movies back in the 70s including “Magnum Force” and “The Summer of 42.” Went to a Billy Graham matinee movie with the 9th grade of Grace St. Lukes. A number of us snuck into “Deliverance.” Since “Deliverance” started about 20 minutes after “A Time to Run” we took turns peeking out into the lobby to see if the other movie was over. I had the bad luck to stick my head out just as the principle Mr. Scoggins was standing there. He told me to get whoever else was in the theater and get on the bus. He never said a word about it too us, or told our parents. I always liked him for that. I have fond memories of seeing dozens and dzens of movies at the Quartet.

Responding to Chuck, yes there was a Highland Cinema. It was a later name for the Studio Theatre. It had many names—Newman, Normal, Studio, Movie House (on Highland), Highland Cinema. The proof of this is in a photo at American Classic Images dating from the 1980s. It is now the concert hall for Newby’s bar next door. It still exists but isn’t lovely. It never was elaborate in my recollection but it had an interesting 1960s “art house” lobby when it was the Studio.

Visiting Memphis this past weekend, I went by the Quartet on Monday. The main entrance is now a sandwich shop and the auditorium exits on the South side of the building are now small storefronts.

I’m hoping someone can maybe help me confirm my foggy childhood memories. I believe I had my first movie going experiences at this theater. At least, I think it was either the Highland Quartet, Poplar Plaza or the Ridgeway Four.

I’m fairly certain one of the first things I ever saw was PINOCCHIO and maybe several other Disney classics (SLEEPING BEAUTY and DUMBO, maybe) around say 1980 or 1981? I was all of 4-5 so it’s hard to say. I’m like 99% positive I also saw POPEYE (the Robert Altman film) around that same time too. I feel fairly certain that was at the Ridgeway, but may have been the Quartet.

Would love to know for certain if those films played there.

JasonCManley: See this retrospective article, which cites the opening day locales, for confirmation of your “Return of the Jedi” experience.

Thank you MSC77, that seals it for Highland Quartet and ROTJ. I remember actually having to wait in a literal line for the next showing too. Those days are along gone..

This theater was the heart of my cinemgoing experiences in Memphis. I’m fairly certain my first film there was The Never Ending Story…and saw many, many movies over the years.

And as a developer, I can promise that The Quartet shall return….

Cinemo: I don’t know if the Quartet showed The Never Ending Story - but I can tell you with absolute certainty that the Paramount Theater in the Eastgate Shopping Center did. It was only a short drive from the Quartet, so perhaps you saw it there.