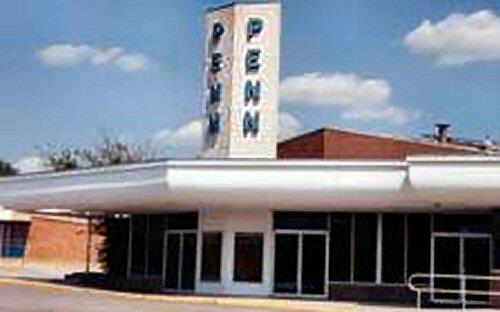 The 700-seat Penn Theatre was opened as a single screen movie theatre in 1967. It was operated by Video Independent Theaters Inc. It was later taken over by Martin Theatres chain and was twinned. It was closed around 1996. It became a country music venue for a short while. It was demolished in 2008.

The Penn Theatre was built by Video Independent Theatres, Inc. of Oklahoma City, OK. Larry Blackledge was the architect. When Martin Theatres (later Carmike) purchased the circuit, the Penn was divided down the middle into two auditoriums.

The Penn was closed in the early to mid 1990s and was “renovated” with the purpose of being an “Opry” style performance house. The Opry was short-lived and since then the Penn has stood vacant.

The Penn Theatre is featured in the November 20, 1967, issue of Boxoffice Magazine, in an article with several photos. The Penn’s 700 seats were arranged in a continental style, with no aisles interrupting them. The Boxoffice article says that architect Larry Blackledge “…handled the project for William J. Cavaness & Associates, Oklahoma City architects.”

Larry Blackledge was the son of K.C. Blackledge, president of Video Independent Theatres. Both Cavaness and Blackledge designed other theaters independent of one another.

For sale here. The OP is what’s left of the Opry sign, I imagine.
http://tinyurl.com/nu9ttt

The Penn Theater, which was known as the Penn Twin virtually all my life, was a two screen theater with unusual design and interesting architecture. The front facade was largely made of aluminum and glass, excluding stucco over support columns and a set of poster light boxes mounted in the center of the building. The building featured large, curved eaves made of stucco. On the north edge of the building, a small planter contained a tree that rested below a square hole in the overhang, ostensibly designed for aesthetics and to let direct light fall on the tree at noon.

The lobby was completely asymmetrical, with the box office on the southern edge of the building and the restrooms immediately behind it. The small concession area was tucked neatly into the south east corner and the lobby’s relatively small size meant that in the era in which Penn saw a lot of traffic, crowding was a major problem. The manager’s office and door to the projection room were on the north side of the lobby and the carpeting, which covered most of the lobby, was light brown with dark accents. The lobby led to a T junction in which patrons could go left, to house 1, or right, to house 2. Entry ways to each house here inclined gently and led to a walnut paneled wall with stained glass on the sides. After walking through the double doors, a smooth aluminum hand rail guided patrons up another incline and around a gentle curve, leading to a long hallway which descended gently before them.

Partition columns stood every few feet all the way down to emergency exits on the exterior of the building. If one desired, one could forego the long decline and turn into the theater, where a large area with no installed seating led to a small aisle on the opposing side of the theater. The theater rows were large and undivided, featuring seats that reclined deeply and rocked, thanks to spring suspension. Several of the seats were broken and had been welded in place or popped loudly when rocked.

Each house had an aesthetic catwalk fifteen feet off the ground on the same side of the house’s entry and these were lit with recessed lighting. In the late 90’s, the Penn did not own a ladder large enough to reach up and over the catwalks for staff to change the lights, so the bulbs eventually burned out over time.

Each house was fairly long and fanned out from a few seats in the front rows to several seats in the rearmost rows. There were no false stages behind the screens. Because of architectural limitations, neither of the Penn’s houses featured working stereo sound by the late 90’s. Speaker mounts were on the exterior walls but not the interior walls of the building. The wall erected to divide the single screen house ran right down the middle and seats were placed directly next to it, leading to the strange phenomenon of being able to knock on the wall and be heard by patrons in the next theater.

The projection room was quite small and cramped, with a small work bench for splices and repairs and the two projectors with their platter system in between. The projection room had a fire escape door leading out to the roof of the building and should a fire have occurred, we were advised to climb down the square hole in the overhang and land in the small planter. Frequently, employees would go out on the roof and sneak cigarettes or climb up to the peak of the roof at the rear of the building.

The roof itself inclined upward, reaching approximately thirty five feet on its back end. This was in stark contrast to the stucco overhang, which was quite low and most taller gentlemen could easily graze the overhang with extended arms. As the theater was tucked away behind the Pennington Hills Shopping Center, it drew increasingly fewer patrons. A large marquee was a major part of the shopping center’s signage at the corner of Frank Phillips Blvd. and Highway 75. The marquee was a large four line marquee, with red painted framing and white neon lighting spelling out Penn Theater in stylized font. There is a Walgreens sign in place where the marquee used to be. Employees hauled a ladder and a box of letters down to the marquee, which was about 500 yards from the building, and climbed up to a small two plank platform with a safety rail that only came up to an average person’s knees.

The last “blockbuster” booked at the Penn was “The Lion King”, in the mid 1990’s. When the multiplex in the city’s shopping mall opened, the Penn began showing smaller budget films, predominantly African-American films, and second-run blockbusters that had previously screened at the Eastland Four, just a few blocks away. Because the Penn’s prints were often worn or old, they were notoriously scratched and frequently broke in the theater’s aging projection equipment.

The Penn’s tickets were cheaper than others in town, which also meant less revenue. Carmike Cinemas, which owned the Penn, eventually sold it to local interests who converted the building into a concert hall for a short time, after which the building sat vacant before the building being razed in the late 2000s.

The Penn was opened in 1967 behind the Pennington Hills Shopping Center for Video Independent Theaters Circuit likely on a 30-year lease . Martin Theatres acquired Video Independent and twinned the Penn. Carmike acquired Martin retaining the Penn Twin almost to the end of its lease. The theatre had a brief run as a live country music house. The last Google map image of the Penn Theatre is in 2008 with its demolition likely occurring the year after when the land was purchased and redeveloped.