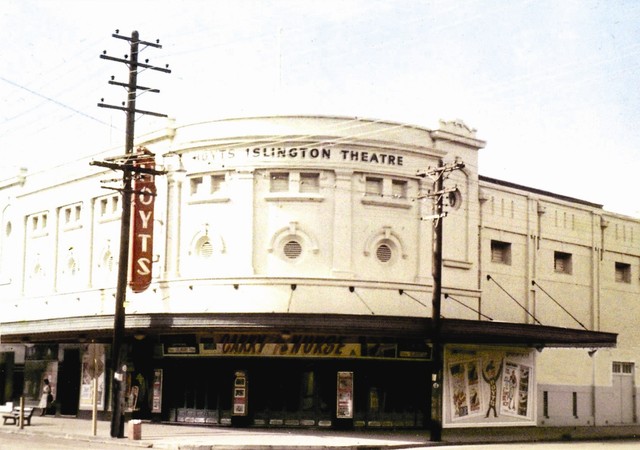 The Regent Theatre, located in the Newcastle suburb of Islington, opened on 10th January 1930 for W. Herbert of Herbert’s Theatres.

The theatre’s façade was boldly treated in a Classical manner, featuring the complete Roman Tuscan order of architecture. The interior of the auditorium was distinctly charming with a rich tone, suggesting comfort and spaciousness. The seating was laid out to seat 1,534, with 540 in the dress circle. The proscenium was a very refined and stately setting with massive fluted columns of Grecian Ionic architecture.

In 1941 or 1942, Hoyts Theatres obtained a majority interest in the property. But eventually, with the advent of television in Newcastle in the early-1960’s, the Regent Theatre could not survive and closed its doors on Saturday, June 27, 1964. It remained empty until August 1969, when it was converted into a Builders Hardware Store, which operated for many years. By 2020 the foyers was in use as a vintage clothing store and the auditorium was Regent Renovations selling vintage furniture.

The original wide proscenium arch is still there, although the lower section at stage level has been cut out.

Certainly, this theatre’s fate is one of the more depressing examples of adaptive reuse.

This dear old thing is still there……and has toilet-seats too! In Newcastle’s re birth about to happen, it is actually now in a good spot to reinvent itself because with the CBD is so dead, it is the fringe – where the Regent is – and the suburbs, where the action and interest will be.
It is a real silent movie theatre and deserves some entrepreneurial spirit.
this lovely 20s building would be very well appreciated today as a 4 screen boutique complex……one (with $) would extend the balcony to the back wall for a big main 500 cinema, and after removing the stalls floor and digging it out a bit, can easily make 3 x 120 seaters and a foyer with new facilities…..it’s just so easy!……..

It was constructed for a small local chain called Herberts Theatres, not for Hoyts.
“Film Weekly” is misleading as Liberty Theatres Property Ltd., was the property-holding arm of Hoyts, who operated most of the big city theatres and cinemas in central Newcastle at that time (Lyric – owned by the Masonic Lodge, the Strand – owned by the City Council, the Victoria – owned by the Victoria Theatre Company Ltd., the Civic – owned by the City Council; suburbs: the Regent (above), the Century at Broadmeadow (demolished after the 1989 earthquake), the Star at The Junction (renamed the Hunter after Hoyts sold it circa 1968 – demolished after the 1989 earthquake), the Savoy at New Lambton, Hoyts Mayfield Cinema, to the best of my knowledge.

Wondering if the close date is correct, or if there is/was another Hoyts Regent; reason being that the poster for the Beatles “Help!” has it showing at the Hoyts. “Help” was released Aug. 25, 1965; but the Hoyts closed it doors a year earlier in June of ‘64. Was there another Hoyts theatre?