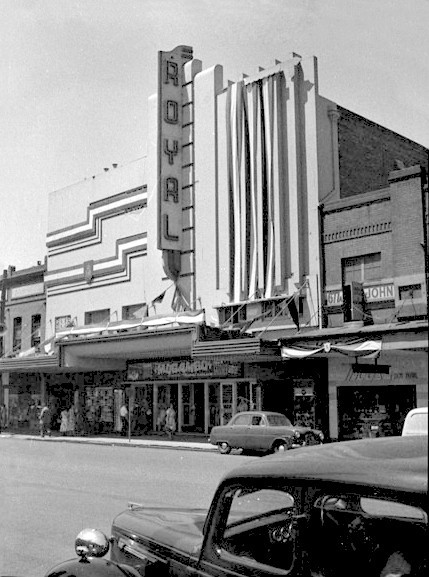 The Theatre Royal, located in the city of Newcastle, some 120 miles north of Sydney, opened on 11th July 1924.

The theater’s first feature was “Hearts Aflame”, plus a few Paramount comedies, travel films, newsreels, and a ‘full orchestra’. Its huge proscenium was flanked by ‘Royal Boxes’, topped by a huge ornamental golden dome with a horse-shoe shaped dress circle. The facade featured classical columns, balconettes and decorative shields and insignia.

On June 20, 1927, the Theatre Royal hosted the world premiere of the Australian silent film “For the Term of His Natural Life”. In 1929, ‘talkies’ debuted with Al Jolson in the classic, “The Jazz Singer”. In the 1920’s and 1930’s, it was common for a fifteen minute ‘live’ shows to precede intermission.

In 1939, the theater was completely remodelled in the Art Deco style, as it was thought that the former Baroque style was old hat and out of fashion. The new exterior and interior relied heavily on deep horizontal and vertical lines and geometrical motifs with tubed, indirect neon lighting to wash the pastel walls. A crying room was constructed at the rear of the stalls for mothers with screaming babies.

The Royal reopened on Thursday March 9, 1939, a showpiece that instantly became the pride of Newcastle. The opening feature was “Suez” with Tyrone Power. However, the first public screening the following day was a double feature “Heart of the North” and “Straight, Place and Show”.

In 1941, Hoyts Theatres acquired the theater, and in 1954, it was equipped with CinemaScope. And in 1962, the theater became the first cinema outside of major cities to be equipped with the Todd-AO 70mm screen process. This necessitated extensive alterations and renovations, the screen was brought forward of the original proscenium area to accomodate a wider and taller screen, as well as new curtains. The Theatre Royal reopened on March 15, 1962 with Fox’s “Can Can” and the seating capacity was reduced from 1,394 to 962 seats.

In 1979, the property was then sold to a local television channel, NBN-TV, who twinned the theater and renamed it the ‘Royal Twin’. After gutting the proscenium and re-aligning the floor, the stalls area became the 498-seat ‘Cinema 1’. What had been the original dress circle became the 427-seat ‘Cinema 2’, which incorporated most of the wall and ceiling decoration of the 1939 remodeling. Both screens were equipped with 70mm screens and stereo sound. With the conversion complete, the theater reopened on December 18, 1980, showing the films “The Empire Strikes Back” and “Sea Wolves”.

The twin remained in successful operation until it was closed on Wednesday, December 6, 1989. The theater remained empty for some time, then a church used the downstairs Cinema 1 area. Cinema 2 has been vandalized during recent years, and still remains without a screen, curtains, or proper seating. The premises was put up for auction, but no buyers came forward until late-2010, when a church moved into the building.

Now operated as some wacky church, it has structural issues and termites. I am not sure what came first and what caused what. The last time I was in there, was 1997 and only the downstairs was used to yell alot about Jesus. The upstairs was unused, in disrepair and had junk everywhere. I need to use the word ‘idiot’ but am not sure where in the above information it fits. A real mess. Also, the CBD of dear old newcastle is about to undergo a massive renovation and I would think that this area of town is a target. If the Royal can be shuttered and kept safely until commonsense and money can be applied, then there is an excellent chance for this perfectly usable building to re birth. BUT the whole street is so abandoned and depressed, it looks like a ghost town. Not to say it can’t all be fixed. Maybe we need some of our wealthy companies and personnes to speak up. After all, it is MONEY that is the answer and they have it. It is called Civic duty and pride. Anyone? .au

Yes, I was there again in March 2005 and it was boarded up. In the contribution by John Adey, above, he is mistaken about the proscenium etc., when the 70mm screen was first installed in the single theatre. The proscenium was deemed totally inadequate and so they erected the new screen and all the associated gear (curtains etc) in front of the existing proscenium, and the screen arched round way over on both sides.
Mr.Adey also mentions the purchase in 1979 but then (obvious error) says that Hoyts closed it a decade later. Hoyts were long gone.

Its a shame because when it was constructed it had a full stage and stage facilities so that a screen could be ‘flown’ and the stage used, although given the almost fanatical popularity of films by the time it was opened I am not sure the stage there was ever put to use. New South Wales has lost some truly fabulous cinemas/theatres. People just don’t seem to appreciate fine buildings any more.