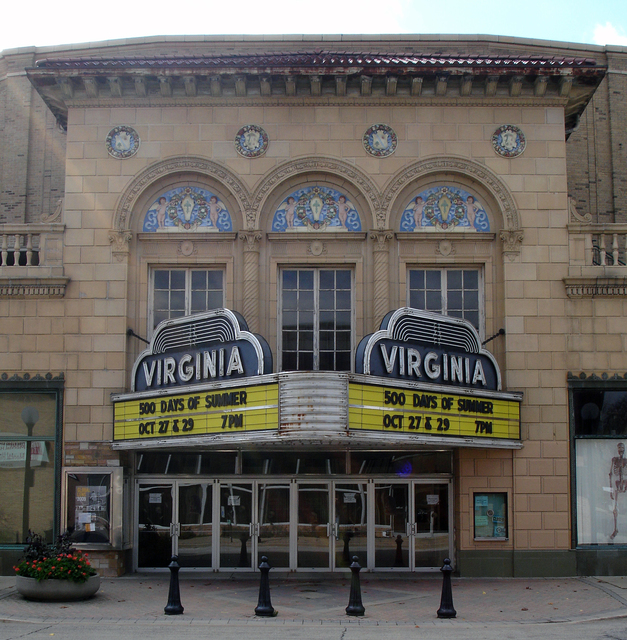 The Virginia Theatre opened December 28, 1921 with a stage production of “The Bat”. The following day it screened its first movie, the silent “Tol'able David” starring Richard Barthelmess. It was designed by noted theater architect C. Howard Crane, for local businessman A. W. Stoolman. The theater was named after Stoolman’s daughter.

Built in the Italian Renaissance style on its outside, to resemble a Florentine palazzo, the theater’s interior was designed in the Spanish Renaissance style, to look like a courtyard of Old Castille. This included arms of Spanish royalty, Baroque plasterwork, and statuary, including busts of Ferdinand and Isabella. The auditorium ceiling dome was once covered in silver leaf.

The Virginia Theatre originally showcased both live stage shows, as well as silent films, accompanied by a house orchestra or a Hope-Grand Orchestral organ. Among the stars to appear at the Virginia Theatre in those days were the Marx Brothers (who also appeared at the nearby Orpheum Theatre as well), W.C. Fields, Buster Keaton, and Red Skelton. In 1929, the theater was wired for sound, the same year the Virginia Theatre was purchased by RKO. Throughout the 1930’s and well into the 1940’s, the Virginia Theatre continued to feature RKO Orpheum vaudeville acts, in addition to the stars on the big-screen.

In 1953, CinemaScope came to the Virginia Theatre with “The Robe” and the following year, Vincent Price’s “House of Wax” became the first 3D film to be screened at the theater. In 1955, the theater was substantially remodeled, including a new ticket booth, front doors, and a modernized lobby. The auditorium remained mostly untouched.

The Kerasotes chain bought the Virginia Theatre in 1968 and in addition to movies, additional stage productions were mounted, such as the controversial “Oh, Calcutta!”. Kerasotes showed its final film, Steve Martin’s “Father of the Bride”, in 1992.

Shortly after the theater closed, the Champaign-Urbana Theatre Company was formed to present productions at the Virginia Theatre, including touring companies of “Grease”, “Phantom of the Opera”, and “A Chorus Line”. Artists such as Alison Krauss and the Sinfonia de Camera also appeared on the stage during this time.

Since 1999, the theater has also been host to Roger Ebert’s Overlooked Film Festival which takes place every April. (Ebert is a native of Champaign and frequented both the Virginia Theatre and Orpheum Theatre as a child.)

In 2000, the Champaign Park District acquired the Virginia Theatre and began a four-phase restoration program to bring the theater back to its 1920’s glory. Work began with a restoration of the marquee and facade. In addition to screening both current and classic movies and the Overlooked Film Festival, the Virginia Theatre is host to live performances, as well as special events. It was closed in May 2012 to continue renovations, and reopened early-2014.

Does anyone know when the “RKO Virginia” marquee was replaced by the [plain] “Virginia” marquee. The RKO-V marquee looks like it has neon, at least the upper part. Info, anyone?

The neon marquee was condemned and removed last Spring. City engineered felt it could no longer hold up under another heavy snow. This video tells the Virginia Theatre history with vintage photos;
View link

The new, replica marquee. I very much prefer the vintage Art Deco sign that they removed recently.

Closed until 2013 for a major restoration.

CHAMPAIGN — It’s believed that the seats in the Virginia Theatre have been playing an integral role to performances and movies in downtown Champaign since about 1939.

And while the seats will be replaced as a part of the ongoing renovation at the theater (it’s closed until spring of next year), the seats will live on, both through residents who purchase them and when they’re refurbished and resold.

The Champaign Park District is hosting a sale of about 100 seats from 3 to 6 p.m. Friday in front of the building. Seats will sell for $50 each. Park district spokeswoman Laura Auteberry said it’s a cash-and-carry sale, so make sure you have a way to take your seats home.

She said residents have expressed interest in owning a piece of local history.

“It’s all being done as a fundraiser for the Virginia Theatre,” Auteberry said. “All of the money is going right back into the restoration effort.”

The rest of the seats will be salvaged and picked up by the Discount Seating Co., based in Jackson, Tenn.

Owner Austin Fongers said he’ll pick up about 1,300 seats in Champaign. While he doesn’t yet have a buyer for them, he plans to restore them to have them ready for sale when someone needs them. It’s possible they could be sold as a lot, or some could be sent to little theaters around the country.

“It’s a good, old, quality chair,” Fongers said of the seats from the Virginia.

Jim Lopez, vice president and partner at Broeren Russo, which is the project’s general contractor, said giving the seats to Fongers' company keeps them out of the landfill and provides an immediate solution for what to do with them.

“We really didn’t want to throw them away if we could do something else with them,” Lopez said, calling it a “win-win.”

Lopez said the restoration will include sandblasting the chairs' metal backs and repainting them, stripping the existing foam and cloth and adding new seats.

Fongers said his company picks up seats all over the country and has been in business for 10 years. It also specializes in restoring seats on-site.

Part of the Virginia’s renovation will be the installation of new seats. Although the park district hasn’t yet finalized exactly what they’ll look like, Auteberry said, they will look historically accurate.

The park district is working with architects Westlake Reed Leskosky, which specialize in theater restoration. She said many times when people are restoring theaters, they put in new seats.

“Eventually, you either have to refurbish them or put new seats in,” she said.

The new seats, like the entire remodel, will be chosen “with a strong effort to maintain historical integrity,” Auteberry said.

She believes they’ll have a rich color palette, perhaps with deep red or maroon, blacks and golds, she said.

“People jump to the conclusion that we’re making everything new and modern,” Auteberry said. “While codes and materials have changed (since the theater was built), we’ve always been very mindful of maintaining the historic integrity of the building.”

However, when the theater reopens, you can expect to be comfortable in the new seats.

“They definitely will be more comfortable just because they haven’t had people sitting in them for the last 60-some years,” she said.

Thanks. Don’t know why my direct links don’t work though…

From what I read in the comments marquee replacement went against local and national opinion, and I personally don’t think it is an improvement. It’s the Windows 8 style of management: 1) Give Windows 8 to focus groups. 2) Focus groups all say they hate it but Windows 8 is released anyway. 3) Windows 8 bombs in the marketplace. But they don’t fix the consumer complaints with an update and continue to try to force it on people as is. This kind of thing always baffles me, especially in the case of the Virginia where it involves a taxpayer-funded organization. In Microsoft’s case they will pay the price with continued poor sales if they don’t give the people what they want. I’m not sure how it shakes out in Champaign, except possibly at the election booth.

Here is a clickable version of the EbertFest link that was posted in the previous comment.