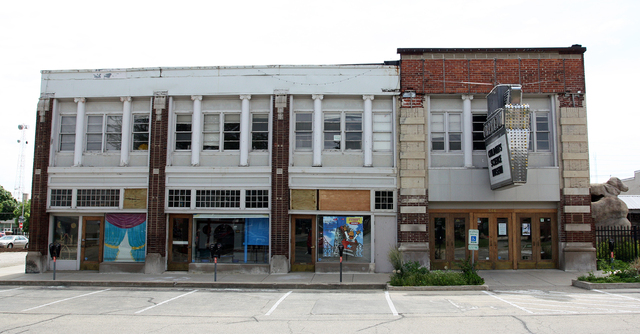 One of the most beloved landmarks of the twin cities of Champaign-Urbana, the Orpheum Theatre has a long history.

The first Orpheum Theatre was built in 1904 as a vaudeville venue, and taken over by Marcus Heiman in 1909. In 1912, it was torn down with the promise that Heiman would erect a new and much larger theater.

The New Orpheum Theatre, as it was originally called, opened in 1914. Designed by the firm of Rapp & Rapp, the theater was based upon the Salle de la Spectacle at Versailles. It had a 30 foot high main lobby, a 40 foot high auditorium ringed with 24 corinthian columns, and highly ornamented loge boxes at the mezzanine level. The stage was large enough for any vaudeville act, and included a screen for moving pictures.

The Orpheum Theatre was originally a vaudeville house. Among the stars to grace its stage in its early days were Will Rogers, Bob Hope, and the Marx Brothers.

In the 1920’s, RKO began operating the Orpheum Theatre, with films now the primary form of entertaiment at the theater. To lure audiences to the Orpheum Theatre as attendance began sinking in the 1950’s, RKO started to screen films in such new formats as Sensurround, CinemaScope, and 3D. The theater’s facade received a garish aluminum covering and its interior was updated in a 1967 remodeling.

By the 1970’s it had become part of the Kerasotes chain. An attempt in the early-1980’s to recast the theatre as an art film house was unsuccessful, and its last few years included a return to first-run films, the last being a slasher film, “April Fool’s Day”, in 1986.

In 1991, the Orpheum Theatre was saved from a plan by the City of Champaign to be demolished for a parking lot. Between 1993 and 1994, the exterior was restored to its pre-1967 appearance, and the inside was converted into the Discovery Place, a children’s museum.

The museum is currently restoring the lobby and mezzanine areas to their original 1914 appearance.

The first link above is of the Ringling Theatre in Baraboo, WI, and the second is of the Orpheum, according to the photo captions. They are remarkably similar, and the Oprheum photo looks very recent. Have they been doing some renovations recently?? (The photos in the Jan 19 post the auditorium looks father tattered.

I posted too soon – according to the museum’s website, they HAVE been doing a lot of renovation in the auditorium during summer 2009 – including repairing and painting the plaster in a historic color theme.

That is definitely the reason. They sometimes used the same basic design template on different jobs, with a few customizations to create a unique product. In this case the same basic scheme was used on both the Ringling & the Orpheum.

Seeing Hitchcock’s “Rear Window” for the first time (in the ‘80’s) at the Orpheum was truly exciting; I’m thrilled for the restoration!

Was a U of I student from fall 82-Spring 1986. I was THERE the last night that the Orpheum was open. The interior was VERY COOL even in those last years. I recall taking a date to see the movie “Comfort and Joy.” Movie was good, but theater FURNACE was barely working. That’s ONE WAY to get a date close to you !! Love to see the interior once again !!

How’s the auditorium restoration coming along?

Even in a state of marginal disrepair, the theater was quite lovely, showing off its vaudeville roots. However, some systems were badly out of date. The non-working furnace mentioned by a poster above, is a prime example. The heat was supplied by a boiler and it was either OFF or ON. The thermostat was a non-functional joke. So if the auditorium was mostly empty, patrons froze. Busy? They sweltered. Both freezers and sweaters complained, but there was absolutely nothing that the staff could do to make them comfortable.

The projection equipment was in much better repair, but to get to the projection booth required flat shoes, nerves of steel, and strong thighs to get up a narrow, steep, turning,dangerous stairway. Popcorn was popped in the dressing rooms, behind and below the stage, and brought up in plastic bags. No aroma of freshly popped popcorn at this theater!

Having now seen the photos of the dome rehab., I can’t wait to go back to the old Orpheum, and see how pretty she’s become. I just wonder if the workers have found the old ice cream freezer that was walled in. Or managed to eradicate the legions of albino cockroaches…