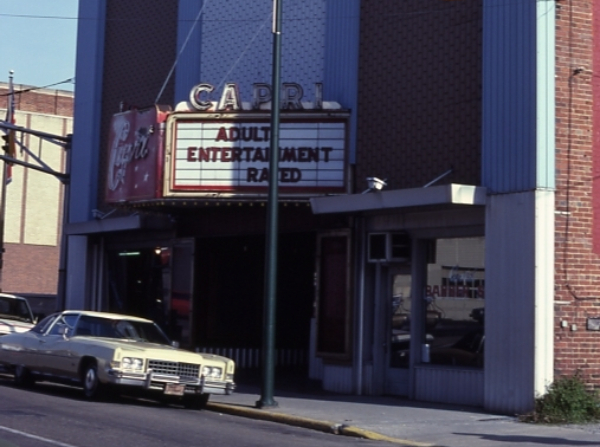 I saw a James Bond film there,the one with Lazenby. I remember it being BIG,and ornate. I sat in the balcony. It was bulldozed to make way for the Johnson City Press building.

A De Luxe Theatre at Johnson City is listed in the 1922 edition of Julius Cahn’s guide. The Deluxe Theatre placed a courtesy ad in the 1923 edition of The Buffalo, the senior class yearbook of Milligan College in Johnson City. A 2007 book called Fiddlin' Charlie Bowman, by Bob L. Cox, says that Mr. Bowman appeared at the Deluxe Theatre in Johnson City in the spring of 1924, and adds that the “…stately entertainment center had been built just four years previously….” It’s quite possible that the Deluxe opened in 1920, and it was certainly open by 1922.

East TN was a “petrie dish” for urban renewal in the 70s. Just about EVERY small town was destroyed by the “experiment” – massive loss of significant architecture. Very sad.

This theatre was built for live performance before the advent of sound reinforcement. Great acoustics. The last ‘live’ show ever presented there was April 9, 1981. Produced by Joe ‘Tank’ Leach owner of The Down Home music venue. The show featured Roy Bookbinder, John Hartford and New Grass Revival. I recorded that show on 10" reel to reel tapes. The city lost a great cultural venue that cannot be built today. No foresight to this day. 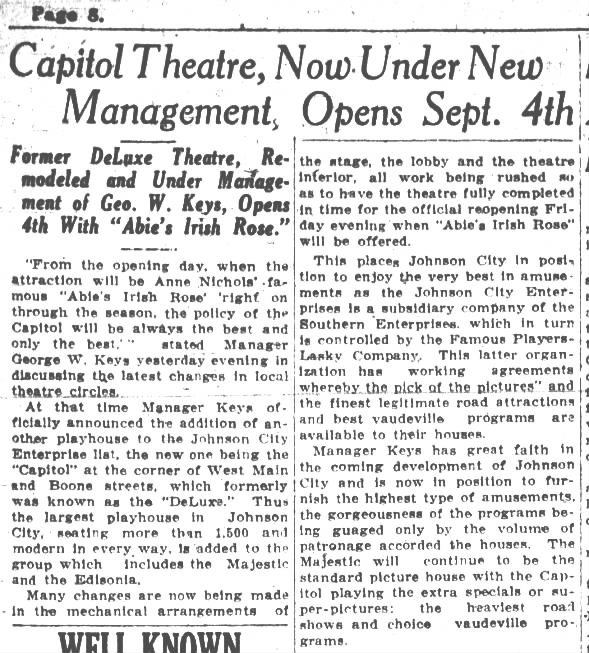 Closed as Tennessee in 1968 and reopened as Capri on November 26th, 1969. Grand opening ad posted.

I have added a pic taken today, of the theater location, a bus station since the 1980s. My description of the pic is somewhat incorrect. The front entrance to the theater would have been where the “left” driveway enters the bus station parking lot. The theater sat close to the corner of Boone and W. Main.