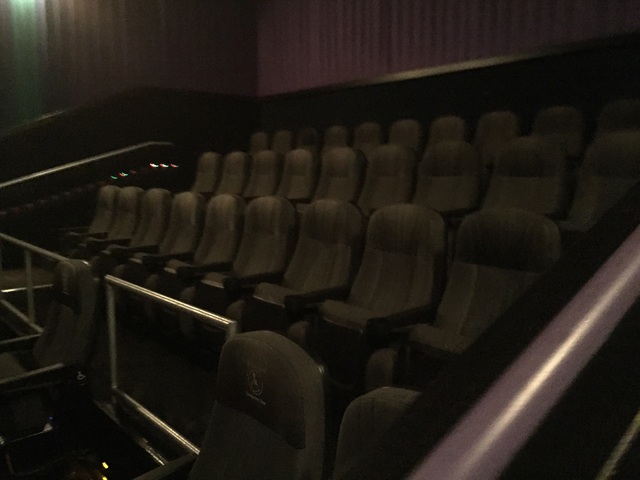 Hoyts Cinemas opened the Carousel Mall 12 with the Carousel Center Mall in Syracuse on Friday October 19, 1990. The complex was the largest and at the time the nicest multiplex to ever open in Syracuse, and was an immediate success. Over the next three years the theatre became one of the most successful in the chain, and Hoyts made the decision in late 1994 to split what was originally Theatres 4 and 11 in half to allow the theatre more programming options.

The Carousel Mall 14 remained wildely successful and just two years later a five screen expansion (two additional screens created in unused space on the theatre level and three screens behind the food court on the second level) opened, bringing the total to 19. In 2002 the theatre was sold to Regal Entertainment Group and in March of 2003 the complex was christened Regal Cinemas Carousel Mall 19.

Regal undertook a massive renovation project in 2005 that added stadium seating and digital sound in each auditorium, a completely new concession stand, as well as a completely new box office. Two screens were lost during the renovation when the auditoriums that were split in 1994 were actually restored to their original size. Seating capacity was listed as 3,495. Independent and foreign films were given a home at the complex when Regal made it one of the seven New York members of the company’s “Cinema Art” program in 2003.

The Carousel Stadium 17 has also been home to the Syracuse performances of National CineMedia’s “Big Screen Concerts” series since the first stage of renovations opened in May of 2005.

Contributed by Brett B.
Get Movie Tickets & Showtimes

October 19th, 1990 grand opening ad uploaded in the photo section for this cinema.

rivest266, do you have an email address where we can reach you? I’ve sent corrections over the years regarding theatres in the Toronto area on your movie-theatre.org web site and they are never corrected or never hear back from you. I’ve sent them to the email address on the web site.

just recently saw ‘Into the Woods’ here on the RPX screen – the 7.1 sound was decent not great – for a musical, that’s expected. As to the theater, not to keen with the huge RPX lettering just to the left and right of the screen (on the adjacent walls). The biggest flaw I noted was that some light from below the screen either from the wall or stair lighting is being projected back onto the screen which causes reflection thus ruining any scene in the movie that is dark or low lit. [Side comment: I wanted to belt the teenagers behind me during the movie who were making some really rude highly explicit comments during the movie – not cool]

chalk it up to the unadvertised fact that auditorium 12 can actually playback a 7.1 surround sound mixed film, but ugh.. the AC unit which clicked off and on during ‘Tomorrowland’ was obnoxious as sin. The screen size is also on the small size.

went back to the RPX screen over the holidays with the family to see ‘Star Wars: The Last Jedi’ and … I must be overly sensitive to ancillary lighting, but man oh man, did the green exit signs create an obnoxious glow on the screen – and I thought the red haze at AMC Tyson’s Dolby Cinema screen was bad, this is ten times worse.

Cineworld/Regal is in the process of instituting reserved seating in the 17 standard general admission auditoriums, which Fandango is showing as going into effect on October 5. This will not effect the IMAX and RPX, as those two auditoriums have been reserved seating for roughly a year and a half.

Auditorium 4 is currently offline, which presumably would be for the previously planned installation of 4DX or ScreenX (both of which were included in the package of renovations that Cineworld and mall owner Pyramid Management Group agreed to in the Summer). This will add to the interesting history of Auditorium 4, which started life as a single sloped theatre and was subsequently split into two sloped theatres by original owner Hoyts and then unsplit back into its current form during REG’s 2004 renovation.

The 4DX renovation in Auditorium 4 is now complete and will open this Friday 3/6. Capacity will be 124, including 119 fixed seats and 5 wheelchair spaces.This will also drop the complex’s total capacity to 3,377 with the 118 seats lost during this conversion.