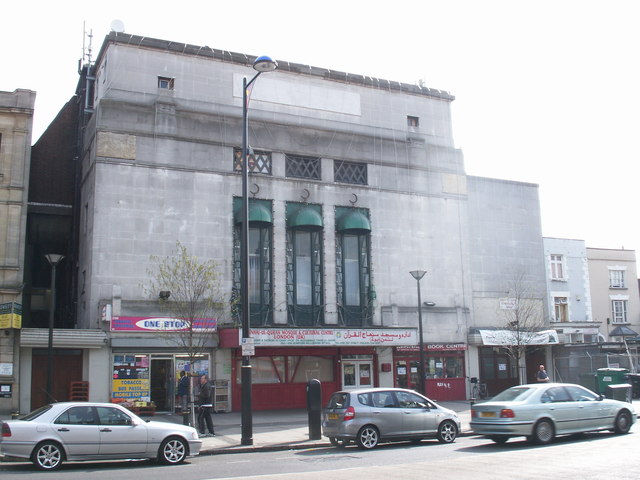 Located in the east London district of Forest Gate. The Odeon was built for and operated by Oscar Deutsch’s Odeon Theatres Ltd. chain, and was possibly a take-over building during construction as it bore little resemblence to a typical Odeon Theatre which were being built at the time.

It opened on 1st March 1937 with Max Miller in “Educated Evans”. The facade was covered in white Portland stone and was quite plain. In the centre were three tall windows and the only other decorations were a set of four stone carved figures of Pan at canopy level and two carved stone reliefs at a higher level, which depicted Art Deco figures. Inside the auditorium seating was provided for 1,110 in the stalls and 696 in the balcony. Wide recessed troughs in the ceiling contained concealed lighting and ornate grilles.

It was closed by bomb damage on 21st April 1941 when a parachute mine destroyed the almost adjacent Queens Cinema. The Odeon was patched up and re-opened on 4th August 1941 with Wendy Hiller in “Major Barbara” and Dennis O'Keefe “I’m Nobody’s Sweetheart Now”.

The Odeon was closed by the Rank Organisation on 31st October 1975 with Sean Connery in “The Wind and the Lion”. It was converted into a snooker club, using only the stalls area and with a false ceiling extending across from the underside of the front of the balcony to the proscenium. A former side exit was used as the entrance with the main entrance and foyer boarded-up. The building retained the ‘Odeon’ name sign which was located high up on the front of the building as it was probably too difficult and costly to remove. The snooker club closed in 1994.

The building then was converted into a Muslim centre and the figures of Pan on the front of the building were hacked off as were the two Art Deco style relief panels. I happened to be passing the building and watched as young men with hammers and chisels carried out this vandalism on the building. I believe the ‘Odeon’ name was also removed at this time. Since 2001 it has become the Minhaj-Ul-Quran Mosque and Adara Minhaj-Ul-Quran Muslim Cultural Centre.

Three vintage views of the Odeon Forest Gate in the east of London:

A close-up photograph in April 1952 where the four carved figures of Pan and the two carved relief panels can be seen more clearly:
View link

A vintage March 1937 photograph taken in the opening week of the Odeon, Forest Gate. The photograph is from the London Borough of Newham archives:
http://flickr.com/photos/newhamcomms/259821444/

I actually live in Forest Gate, and in the early 80s most of the local cinemas were closed, the closest being the Odeon cinemas in Ilford and Barking. They were a little out of the way, and even in the 80s they appeared anachronistic, something that belonged to the old world, there was such indifference to the two Odeon’s that were still open. Me and my siblings had to use cinemas outside of the area, the cool thing being we got to see movies in many of the London cinemas now closed or turned into multiplexes. Sometimes we were unable to see movies we really wanted to. This old Odeon, this glorious monolithic building always filled me with fascination, and the huge Odeon logo was still there when I was a child. Its very design and that red lettering suggested such grandeur and I loved the idea of going in a place like that as the banal world continued in its daily life outside. In there, like the old cinemas, there was a world that was about spectacle, and as people fell in love with VHS, I always wished they opened that Odeon so I could go inside and soak in the atmosphere. I must have been about four or five then, in the mid 80s, and I knew even then that few people were frequenting cinemas and I sensed if it was still open, there’d only be a few people there, but I kind of liked that idea since I’d rather watch films in a huge theatre with a handful of people who really want to revel in the experience. This building has haunted me for many years, and it is a stark reminder of what the area must have been like, and I feel such great indifference to it, witnessing the facade. There is something odd when you encounter a place that people no longer have a connection with, as far its design is concerned, it just reminds people of the deadness of things, of lost grandeur, the loss of artifice. I donâ€™t know, at some point I will write more about this, in some other way maybe, but the building has always been a great source of inspiration for me.
Although the mosque has removed the Pan figures, being a local person, and having a very good understanding of the culture, I could assure everyone that the owners did not mean to deface the building. As a mosque, it cannot depict images of humans, as this is prohibited within the Islamic religion, and even if they had wanted to preserve them, such is the law of conviction that keeping them there would have represented blasphemy to the current users. The building itself retains a lot of its Character, it will always have its history and at least the current owners have found some sort of meaningful use for the building. The mosque has saved it from demolishment, so it continues to exist. The local Council, Newham have very little appreciation of history, and if they could not even oversee how its local monument, The Old Spotted Dog pub was defiled recently by the present owners, following its sale, I doubt theyâ€™d have thought an old Odeon was worth keeping. There are numerous other people who may have torn it down. I may go in there and take some pictures, but as a place of worship, it may not be permitted, but I can probably take photos of the exterior. An area that has changed beyond recognition, this cinema is an integral part of its affluent pre-war past, something that we all walk past. Yes, the area is predominantly Muslim and Asian, but this cinema is one of the few remaining buildings that left a mark from a different point in history and there should be such markers from throughout history so we could also trace how we evolve, change and find meaning in other things, and back again. The Odeon logo is gone now, and the main entrance is now flanked by two Islamic themed shops but the funny thing is it still looks like a cinema. I love that building, even if no longer shows movies!!

Also, this is one of my favourite building facade’s in all of London as it has this look of an old ruin, but one that still thrives in a totally different context from what it was, but that’s what makes London so cool, and that is how new things can preserve the past and this is how we don’t have to demolish old buildings, as long as someone finds some menaingful use for them. Not far from this cinema is where Hendrix wrote Purple Haze!!