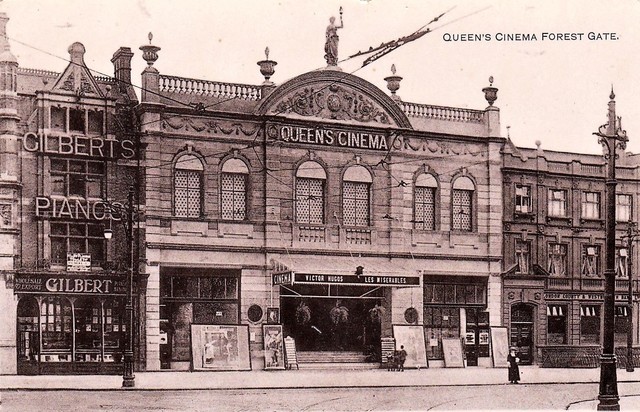 Located in the east London district of Forest Gate. The Queen’s Cinema opened in July 1913 and it was designed by architect W.R. Jackson, with 2,000 seats all located on a single floor. It was operated by Forest Gate Estates Ltd. In 1926 it was taken over by Abraham’s Super Suburban Cinemas, who closed it on 6th May 1928 for re-construction. This included the addition of a balcony and the new cinema seating 1,750 was opened on 6th September 1928. It was designed by the architectural firm Leathart & Granger.

It was re-named the New Queen’s Cinema and it had facilities to stage variety shows, together with the film programmes. It had a 30 feet wide proscenium opening and a stage 18 feet deep with three dressing rooms for artists. It was equipped with a Christie 2Manual theatre organ.

In October 1929 it was taken over by Associated British Cinemas(ABC) who continued to operated it as a cinema with stage shows as part of the programme. Sadly on the 21st April 1941 the building received a direct hit from a German parachute mine which just missed the almost adjacent Odeon Forest Gate. The Queen’s Theatre was destroyed beyond repair, but the Christie organ was salvaged and installed in the Regal, Halifax, Yorkshire.

After the war, the remains of the building were cleared and a retail unit with offices above was built on the site, the retail unit became a supermarket. In 2007, plans were proposed to part demolish this building and build apartments on the frontage. In 2009, it still remains, although empty, apart from a a Ladbrokes Bookmakers operating from the premises.

A vintage 1930 view of Romford Road, Forest Gate with the New Queen’s Cinema on the right. Photograph comes from the London Borough of Newham archives:
http://flickr.com/photos/newhamcomms/259821574/

Does anyone know what currently stands on the site of the former Queen’s Cinema?