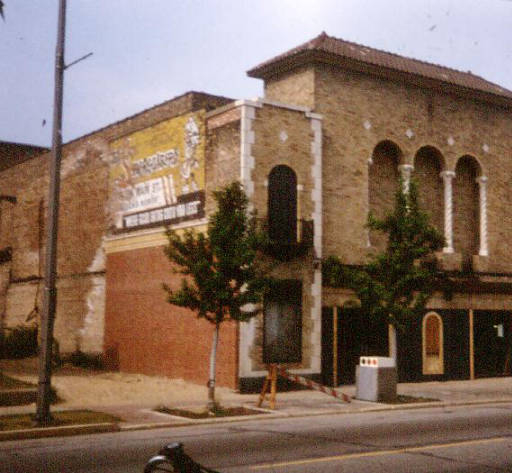 The New Northside Theatre was opened on February 26, 1934. It was located on Mishawaka Avenue near Main Street. It became a restaurant and banquet hall, and was demolished in 2008.

The American Terra Cotta Index lists a theater and store building by Rapp & Rapp from June 26, 1930. Is this it?

I don’t see this building on the map view, unless I’m looking in the wrong spot. I just see a vacant lot.

Here is an undated photo showing the Northside Theatre after it had been converted to another use. There is nothing resembling this building in Street View, so my guess is that it’s been demolished. Below the photo it says that this was the Mishawaka Theatre, “…also known as the Northside Theatre.”

The asymmetrical facade, the broad but shallow tile-roofed tower section, and the three arches framed by Solomonic columns gave the building a look that was more Moorish than anything else. I’ve been unable to discover the opening year, but sometime in the 1920s seems most likely, although an 800-seat house called the Mishawaka Theatre was listed in the 1910 edition of Julius Cahn’s guide. I couldn’t find a theater called the Mishawaka in the 1921 South Bend-Mishawaka City Directory.

The Northside Theatre was demolished in 2006. According to this article in the South Bend Tribune, the building was being demolished by Mishawaka’s redevelopment agency, and the land will probably be marketed for residential use.

I know for a while it was a live performance night club/bar. It had a decent little stage for small theatre. This was late 70’s early 80’s.