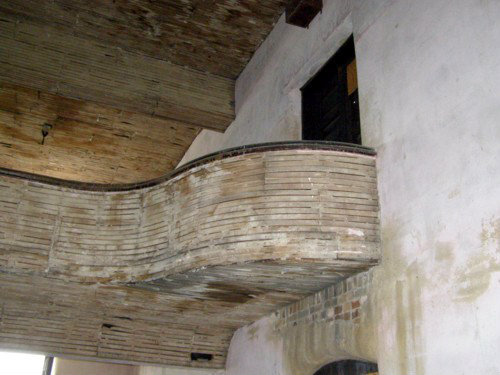 This theater was opened in 1907 by the Fraternal Order of Red Men. Besides showing films, the auditorium was used for basketball games, boxing matches and dance shows. The theater closed in the late-1950’s.

The local citizens have been renovating the building for years, but it remains unopened and unused as of today. The building is listed on the National Register of Historic Places.

A spark of life

Sunshine filters through tall rectangle windows, illuminating an abandoned opera house where the stage lights last dimmed in the 1940s. A dust-coated curtain remains suspended above the stage, a piano with a tuneless keyboard rests in a corner, and the ticket booth still displays a poster advertising “35Â¢ couples.” They are remnants of a past when the Tecumseh Theater was a thriving center of community life for the thousands of coal miners and their families living in Shawnee, a small town in southeastern Ohio.

When the Tecumseh Theater, formerly known as the Indian Theater, opened on Main Street in 1909, the local population of the town and surrounding communities had swelled to more than 15,000 people. A performance of the popular play Uncle Tom’s Cabin or a traveling vaudeville show would have sold as many as 750 tickets. But the auditorium played host to more than theatrical productions. The structure’s flat floor made it ideal for basketball games, dances, roller skating, and similar forms of entertainment.

Unlike other small towns at the time, Shawnee boasted two functioning opera houses. Just one block north, the Knights of Labor Opera House, subsequently purchased by the Knights of Pythias, had opened in 1881.

Shawnee was known as the entertainment capital of the region, according to local historians. Nestled in the Hocking Valley, the town grew with the arrival of the railroad in the 1870s and from the prosperity generated from local coal mines.

Today, those times are a distant memory. Shawnee’s coal mines ceased production decades ago. The walls of the Tecumseh Theater are stripped to reveal the structure’s wooden skeleton, the floorboards missing or broken. The original Knights of Labor Opera House is a storeroom for the Hannah Furniture Company. But the two brick opera houses stand tall, sentinels guarding their past.

The Tecumseh Theater is located on Shawnee, Ohio’s Historic Main Street. The district is listed on the National Register of Historic Places due to its unique boom town architecture and important role in industrial and labor history. The three story structure was known as a “skyscraper” when it was built in 1907 by the Improved Order of Red Men, one of the many fraternal organizations that existed in the Little Cities of Black Diamonds Coal Region at the turn of the last century. Its early use of steel I-beam construction was rare in rural America. Its height made it Perry Countyâ€™s tallest building, a distinction it holds to this day. It took two years to build the structure, utilizing iron, clay and brick from the nearby Rock Run brick plant.

The building sits on the site of the Oâ€™Bear Hotel, fashioned from the farm house that stood here before the town was founded. The hotel hosted such prestigious guests as William McKinley and William Jennings Bryan as they courted the vote of miners in the 1896 presidential election. The buildingâ€™s

main theater spans the middle two floors of the four story building. It was called the Indian Theater. Complete with a professional sized stage and balcony seating, its unique flat floor that never contained fixed seating made it a multi-purpose building. The relatively new game of basketball was the first event held in the space with baskets mounted on the balcony and the edge of the stage. Barnstorming teams from the east were known to have visited the theater to play local teams. Vaudeville shows, plays, musical concerts, boxing matches and high school graduations were also common occurrences in the theater during the early days. During the 1930â€™s and 40â€™s the theater became a popular place for dancing as big band and swing music became the rage.

The flat floor was alsopopular as a skating rink in the 1950s.

The two storefronts on the first floor of the building provided income for the buildingâ€™s owners during the early years. Among the tenants were a ten pin bowling alley and a barbershop. Dressing rooms were located in the rear of the first floor and reached the theater stage above by a stairwell. A cistern located under the first floor not only provided water to the building, but also was vented to the stage to provide cool air during the summer months.

The top story of the building was built as the headquarters for the Red Menâ€™s Lodge, complete with small office rooms and a large ball room where the organizationâ€™s meetings and ceremonies were held. Unfortunately, the organization only stayed in the building until 1912 when they went bankrupt from debt incurred building the structure.

The building was purchased by area businessman, Mr. David Lewis who converted the left hand storefront into a silent movie theater called the Linda Theater in the early 1920â€™s. He eventually sold it to Mr. Louis Hatem. During the early 1930â€™s Mr. Hatem remodeled the theater with elegant seating and dÃ©cor and installed the first talking movie projectors in the Hocking Valley, bringing movie patrons from all over the region to the town. He converted the right hand storefront into an elegant lounge and confectionery for his movie operation, and named it the â€œNew Linda Theater.â€ The first floor dressing rooms became an apartment for his family as stage shows in the Main Theater were fading from the entertainment scene. Mr. Hatem successfully operated the movie theater here until 1959. Several generations of Shawnee citizens have fond memories of attending the movies at this location.

After the movie theater closed in the late 1950â€™s the Hatem family vacated the building, with Mr. Hatem using the Main Theater for storage. A fire in the building adjacent to the Red Menâ€™s Hall in the 1960â€™s severely damaged the theater roof. Unrepaired, water began to pour through the structure causing excessive damage to the building’s floors and plaster walls.

In 1976 Mr. Hatem agreed to sell the building for $500 to a demolition company who wanted to salvage the valuable steel I-Beams in the structure. Their plans were overheard by local citizen Skip Ricketts who was operating a diner down the street from the theater. Alarmed at the loss of this town landmark, he approached Mr. Hatem and offered him $500 for the building.

Mr. Hatem agreed to sell it to him. Ricketts had to borrow $500 from his father to make the purchase. He then joined with three other of the townâ€™s younger citizens to form a non-profit group to own and save the building. The group renamed the building The Tecumseh Theater in honor of the great Shawnee Indian chief Tecumseh.

The first project of the group was to completely replace the buildingâ€™s roof and repair broken windows in 1977. Several dozen idealistic young adults took on this project with the help of a local roofer as their foreman. Then dozens of truck loads of rotted debris and plaster had to be removed over the next several years, a

project completed by summer youth workers. Failing roof trusses became the next project, followed by engineering studies and architectural plans. It was clear that the task of restoring the building was much larger and more expensive than ever dreamed, but the job of â€œmothballingâ€ the building had been accomplished.

The financial reality of owning a building and paying the debt incurred by repairs led to the institution of a number of annual fundraising events. These activities have become part of the local culture. A Concert in The Park that was started in 1977 continues to this day. The Walter Harrop Classic adult menâ€™s basketball tournament ran from 1977 until 2001 held first at the Shawnee School and then Miller High School. It has been replaced by the Sis Norris Classic, a youth girlâ€™s basketball tournament. A membership/friends drive is held every other year to garner contributions to the effort and the Theater Group is known for being a reliable food vendor at various community events.

While fundraisers paid the bills, attempts to raise funds via grants have also slowly brought life back into this landmark building. In 1984 water, electric and temporary sewage services were installed. In the late 1980â€™s a new rubber membrane roof replaced the 1976 version. In 1992 the group formed a relationship with Sunday Creek Associates, a non-profit community development organization. With Sunday Creekâ€™s support a grant from the National Trust for Historic Preservation matched with a new loan led to the first occupant returning to the building in over 30 years. The Shawnee Branch of the Perry County District Library made the left hand storefront its new home in 1993. A year later a loan taken by the group financed the renovation of the first floor apartment, bringing the second tenant to the building. Since that time additional structural repairs to the building as well as renovation of the rear stage doors and stage floor have consumed all available resources for renovation.

In 2002 updated cost estimates and architectural renderings were made on the building and since that time the organization has worked with Sunday Creek to seek sources of funds to implement an $850,000 project to restore the main theater and install an elevator tower to make it accessible. To date these funds have not been raised, but hope is still alive that this building can become the anchor building in the overall redevelopment of Shawneeâ€™s Historic District.

Here is a website that has many good recent interior pictures of the Tecumseh along with a few outdoor shots: