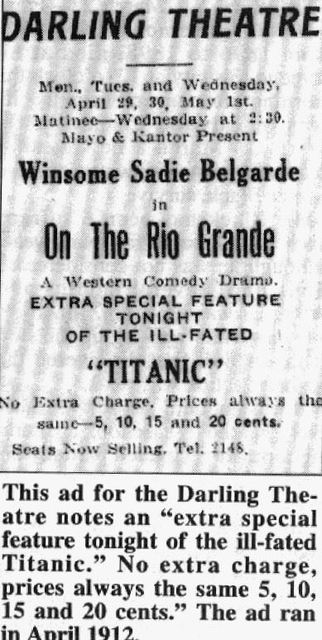 Built in the 19th century, this large theatre located at 19 Elm Street, Gloversville, was the only one not taken over by the Schine brothers. It is now forgotten by most people from the area. The theatre showed some movies, but was originally built for vaudeville and stage shows. After closing it was used as a showroom. I have been told the theatre was demolished in 1962.

The Darling theatre is briefly mentioned in Herbert M Engel’s book titled “Shtetl In The Adirondacks.”

The Darling was located on Elm Street.

The Darling Theatre in Gloversville was on a list of theaters designed by Leon H. Lempert & Son that was published in the 1906-1907 edition of the Cahn guide.

There is a photo of the Darling Theatre on page 103 of Gloversville, by Lewis G. Decker (Google Books preview.) The text says the Darling was located on Elm Street opposite Middle Street.

The Darling Theatre was showing movies at least as early as April, 1913, when this item appeared in The Moving Picture World:

“Several Massachusetts exhibitors are leaving that territory, to try their fortune in New York State. W. 0. Youngsou, formerly manager of the Bijou Theater, North Adams, Mass., has formed a partnership with Lewis J. Cody, and William C. O'Brien who sometime ago was in charge of the Bijou. The Darling Theater of Gloversville. N. Y.. has been leased by the new concern. Mr. O'Brien has lately been in charge of the Emily Theater, of Gloversville, but has now resigned in order to guide the Darling Theater.”

April 1962 demolition photo added courtesy Steve Oare. The Korkay System on the marquee is a cleaning supplies company founded in Gloversville in 1953. So it must have been their showroom prior to demolition.