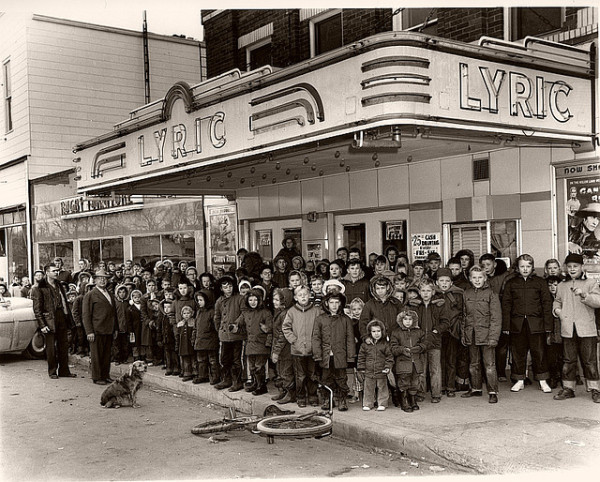 This theater has a long rectangular marquee and flagstone walls by the entrance. The upper part of the building is brick.

A sign on the lower marquee says “Established 1922” and the cinematour page has a nice photo of a display of old theater photos, no doubt of the Lyric/Centre. View link

The building seems to have the same four windows above the marquee, and the present marquee has the same rounded corners.

The future of the Centre Cinema is looking bleak; the owner is skeptical of being able to convert to digital, and even if he does, he is not certain the audience will be there. He is hoping to keep the theater open until Christmas, 2012. The theater is for sale. View article

Capsule movie reviews by O. Troyer of the Lyric Theatre, Rugby, N.D., were published in issues of Exhibitors Herald from 1920 through 1924.

The following item appeared in the May 8, 1926, issue of Motion Picture News:

“Rugby, N. D., will have a new theatre in August. J. A. Troyer, of the Lyric Theatre there, and his brother, O. O. Troyer, who has a theatre at Dickinson, are building the house.”

I don’t know if the new theater got built or not. It’s possible that it was just a new home for the Lyric.