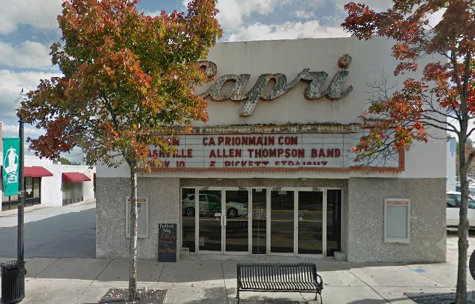 The Cherokee Theatre opened on November 20, 1936 in an existing building that formerly housed the Becker’s Bakery. It was located next door to the Hamrick Theatre, which opened in 1930. The building was gutted and extended to add a stage. It could seat over 500. A new facade was added including a marquee and vertical sign.

The theatre closed for a short time in 1968 and was remodeled and then re-opened as the Capri Theatre. The Capri Theatre is still in operation, initially showing first-run movies, but by 2014 it had dropped movies in favour of live theatre events.

Here is another photo:
http://tinyurl.com/yahqpn3

The Capri no longer features movies, it is a live event center. website