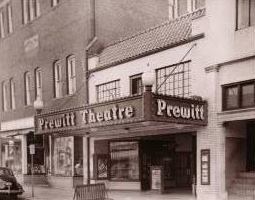 Opened as the Prewitt Theatre on November 23, 1927 seating 400. It was built on the site of the storefront Princess Theatre that closed in 1924. The theatre was built by Mr. L. M. Prewitt who was also the architect.

When the theatre was remodeled and re-opened in 1970 as the Cinema West showing X rated movies it was met with strong disapproval from the residents of Plainfield. The X rated films didn’t last long.

The theatre went through a couple name changes and finally became known as the Village West playing mainstream pictures, which closed in 2005.

In January 2021 it was announced the theatre would reopen as a restaurant and special events space.

From the Hendricks County Flyer
January 26, 2006

PLAINFIELD — The Village Theater here is closed for remodeling but instead of going for a modern look, owner Frank Katris says visitors will feel like they’ve stepped back in time. When the revamped theater is unveiled a few months from now, he says it will be reminiscent of the theater Plainfield residents remember from days past.

Katris said the Village originally opened in November of 1927 and served as a place for people to take in movies, get their news, and socialize. Most of the theaters back then, he explained, had a theme and this particular one was a simple Spanish style.

Katris is now revamping the original style with the hopes of making it look similar to the multi-million dollar Paramount Theater in Anderson.

When Katris purchased the Village in February of 2002, he said that he knew improvements needed to be made. With ever-growing competition of the larger theater chains in Hendricks County, he said those planned improvements are now a necessity.

“You need something to get people to come in,” he said.

Katris said the Village is an important part of history and people here have many fond memories of it. That’s why he wants to stay true to the original theater design, while adding some more “atmosphere.”

Just as movies can transport viewers to a different place or time, Katris wants his theater to do the same.

“This is to preserve history and honor what our ancestors did,” he said. “The Village is part of the history of this town.”

Katris said he doesn’t know how much the theater’s renovation will cost or when it will be done. But he does know what he envisions. The finished product, he said, will have recesses with windows, balcony treatments, decorative molding, and statues. The lobby will be art deco with the entryway staying true to the ‘20s.

Acting as his own general contractor, Katris will also add a restaurant kitchen to provide a variety of menu items, freshly made gourmet popcorn, and special beverages.

The upgrade will maintain the theater look while adding a dining area in the back, he said.

Katris is no stranger to the movie or restaurant business. His father once owned a theater and his siblings own one as well. His family also ran a restaurant at one time.

PLAINFIELD — A lot of history was made in 1927. Henry Ford introduced the Model A, Charles Lindbergh flew nonstop across the Atlantic and in Plainfield, the Prewitt Theatre opened on Main Street.

The Prewitt eventually changed names to the Village Theatre and continued to show movies until 2005.

It has fallen into disrepair since then, but the Town of Plainfield hopes that won’t be the case for long.

Plainfield purchased the building last year for $335,000 with money from a fund that takes riverboat gambling profits and divides them among cities and towns to use for special projects.

A new Prewitt sign has gone up and now the town must decide what to do with the building.

A feasibility study with Ratio Architects should be done by the end of the year, according to Stephanie Singh, Plainfield’s communications director.

“Residents are interested in it and we want to fulfill that interest,” Singh said. “Overall, the goal is to preserve the small town feel of Plainfield.”

Uses could include meeting space for groups with movies on weekends.

Plainfield won’t have to look far to see what some towns have done with old theaters.

In Shelbyville, the Strand Theatre is used for comedy shows, live music and stage shows.

And not far from Plainfield, the Royal Theater in Danville, which also opened in 1927, shows current movies and stages concerts.

Seems to be back as the Prewitt, but not a movie theatre. https://www.insideindianabusiness.com/story/43321040/plainfields-prewitt-theatre-to-see-new-life?fbclid=IwAR3ZrtaVF9kD-9Au3BXe19YaA6x32vRKA_bh4L07-oN5b5I72lTtaqtynSY