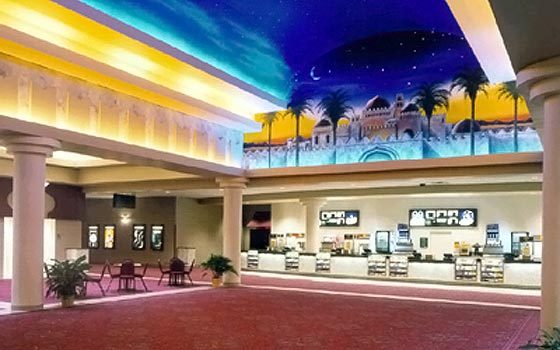 This is a very large, modern multi-plex to the south of Lake Delton, WI. It was constructed in 1999. Part of the Star Cinema chain (a small chain with cinemas in Wisconsin and Iowa), it appears to be part of a complex that includes lodges and casinos. Any further information on this cinema would be appreciated

I was in this theatre recently. I was stuck in the Wisconsin Dells/Lake Delton area because my Amtrak train to Chicago was almost 5 hours late. This is one of the best multiplexes I have ever been in! The auditorium I was in had terrific sightlines and one of the largest movie screens I have ever seen.

If you have any further information on this theatre, please contribute it!

The designer (although I’m not sure he is the architect) was Joe McNally Building Construction of Middleton, WI. Here is a link with some building specifications and a great photo:
http://www.nbs-inc.net/abc_kahlihari.jpg

As you can see, it is a very substanital building.

A new company took over Star Cinemas. Its now Kerasotes. Kerasotes seems to have had some trouble with management quiting. When I was there recently I had some problems with the cleanliness, and when I approached the management about this he was more than willing to help and explained the situation of how they had to hire a lot of new employees and they are still being trained. So some things are overlooked. I got the feeling that this is like starting a brand new theater. Unfortunately its hard to do that when we have been used to the old theater company. I think over time it will be fine. For now we have to bite the bullet.

Don’t expect things to improve with Kerasotes. They are very poorly run and usually doesn’t take long for theatres they buy to become run down and most of the ones the build are poorly built to begin with. I know of one that wasn’t poorly built from what I heard and in that case the town in still trying to get them out. They still have Kerasotes boycotts and have heard that some of the near by towns are starting to do the same.

There were 2 theatre companies that owned a couple downtown theatres that Kerasotes offered to buy out and the companies refused and in less than a week one of them burned to the ground and the other sold quickly and the owners left town even faster.

I have been in a number of Kerasotes and also worked for them, and it is normal to get stuck to the floors during the first set of shows because they don’t clean them. When I worked for them they bought the theatre I was at and I stayed on with them. The opening weekend under Kerasotes they put in a policy of not cleaning the popcorn bins at the end of the night and it went over a month before given permission to clean it out to save on payroll. We were also told by the manager not to bother her if customers complained about sound, picture ,etc and tell them it was being taken care of.

I recently went to a movie at Kerasotes near my sister’s only because there are no other theatres left and they built a new theatre to replace an old one they bought at the same time as the one I started at and it is bigger and more modern but it’s still nothing. The old one was very run down and until last fall there was another theatre my sister always took the kids to but they were forced out of town and that one was cheaper and better quality and able to get the movie running and on the screen unlike at Kerasotes.

Kerasotes is also owned by the mob. I have a brother in law who is a state trooper special investigator who also told me be careful with Kerasotes. Of course he could give details but was able to tell to be careful.

That is surprising because I think that in the Chicagoland Area, Kerasotes seems to be doing well. They bought the Webster Place from AMC and sunk a boatload of money into it. The Webster Place is once again a good theatre to see a show in. Loews and AMC had both run it into the ground.

I can confirm that Joe McNally (yours truely!) was the architect for this theatre. The designer was Paul Mason. Building Construction, Inc. is no longer in business. Paul and I both work for Dimension IV Madison Design Group in Madison, Wisconsin. We are still doing movie theatre design work. You can contact me at:

I was not involved in the design work for the balance of this facility (lodge and casino)…just the theatre.

I also did the Star Cinemas in Fitchburg, Wisconsin and Johnson Creek, Wisconsin. And a small theatre in Wauseon, Ohio.

This is now a AMC

The chain should be changed to AMC. AMC even has its logos on the building.

Address is off. Should be 1301 Kalahari Drive Baraboo WI 53913. The theatre is visible on Street View at this address.