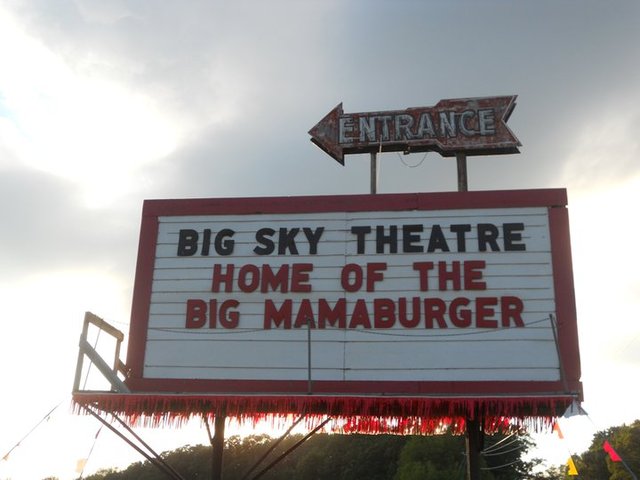 This drive-in originally opened in the early-1950’s as the Winnebago Drive-In (it’s located on Winnebago Road). Known for many years now as the Big Sky Drive-In, and operating as a twin since the mid-1990’s, the theater can accomodate about 400 cars.

This very popular and historic Wisconsin Dells entertainment venue is family-owned, and is also known for it’s snack bar’s ‘Big Mama Burger’ as much as for the movies it shows. The Big Sky’s season runs from April through September.

Any comments or questions regarding any drive-in theater in Wisconsin, please check out my website at
www.drive-inthruwisconsin.com Or contact me at I will give you complete and accurate information about Wisconsin drive-in theaters, just ask. Thanks, Charles Bruss

Great name for a drive-in.

According to their website the Big Sky Drive-In is all digital playing first run attractions.

On a very clear night, from our house on a hill about 8 miles away (hwy 127) we could see the screen of the Winnebago drive-in from our front door. It was just a bright dot on the horizon though. LOL! Had many hours of fun and lots of nap time at that drive in when we were kids. Never could stay awake long enough to see the second feature.

Ol' Charles Bruss should have mentioned the May 2008 article in the Wisconsin Dells Events that quotes him. More importantly, the article sets the opening date of the Winnebago as Aug. 14, 1953. “Owned by Don Deakin, the theater screened a newsreel, two cartoons and the feature film ‘Raiders of the Seven Seas,’ and gave patrons a souvenir ashtray.”

The article continues to say that the Winnebago later became known as the Dells, saw a windstorm knock down the screen in June 1977, and was sold to the Don LeGros family in 1980. They changed the name to Big Sky in 1993 and added the second screen in June 1994.

The 1982 IMPA still listed the place as the Winnebago, owned by Melcher Ent. The 1984 edition had it as the Dells, owned by D Legros (sic). I know that IMPAs are unreliable, trailing indicators, but this suggests that the first name change happened when LeGros bought the place.