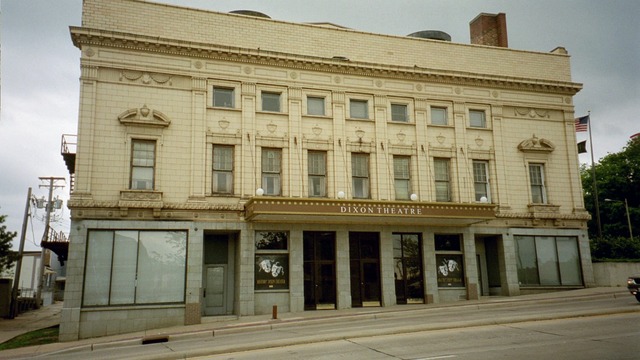 The 1,140-seat Dixon Theatre was opened in 1922 and built on the site of the old Dixon Opera House, which was destroyed by a fire in 1920. Movies lasted for six decades at the Dixon Theatre, but it, like many others, fell into disrepair and by the end of the 1980’s was shuttered.

Fortunately, the theatre has now been restored and reopened as a concert venue and community center and is also used by the local theatre guild. The Dixon Theatre is home to a Barton 3 manual 12 rank theatre pipe organ, which is used for concerts and to accompany silent films.

I am interested in knowing when and how this theater was restored. Also, could you please advise me as to who headed up the the project? Thanks.

They have replaced the marquee since the photo above was taken and it looks great. They were re-upholstering the seats as they could afford them and that project may be finished by now. I will try to get a current picture of the front and interior.

Here is an August 1951 ad from the Dixon Evening Telegraph:
http://tinyurl.com/489psv

This theatre now has a 3/12 Barton theatre organ installed

Thanks for the photos jwballer.

Really gotts look for that marquee.thanks guys for the stories and pictures.

The March 21, 1921, issue of Exhibitors Herald said that plans for the proposed Dixon Theatre in Dixon, Illinois, had been completed by Chicago architectural firm N. S. Spencer & Son.

An article in the December 9, 1966, issue of the Dixon Evening Telegraph says that William J. McAlpine was the contractor who built the courthouse, the old post office, the Dixon National Bank building and the City National Bank building as well as the Dixon Theatre. Almost all the references to McAlpine I’ve found call him a builder or contractor, not an architect. Those that call him an architect all appear to be citing the Dixon Theatre’s web site.

Dixon’s William J. McAlpine is not to be confused with William Jarvis McAlpine, a noted 19th century civil engineer.