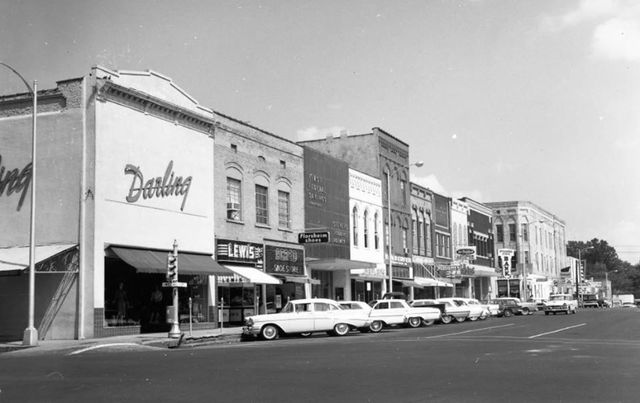 The Savoy theater ran R rated movies in the 50s. Most patrons were colored. My father Ewell Tucker bought the building at the time it was used as Dyersburg machine works. MY mother Margaret Ruth Tucker used it as a antique store now is storage for Tucker properties.

The “Theater Gossip” column of the September 26, 1932 issue of the St. Petersburg, Florida, Evening Independent said that, on October 3, the “Francis” Theatre in Dyersburg, Tennessee would be the site of the world premier of the movie The Cabin in the Cotton, which was based on a novel of the same name by Dyersburg native Henry Harrison Kroll (scan at Google News.)

I’ve seen this theater referred to as the Francis as often as it is the Frances, including by angelamatlock, whose father once operated the theater, in an earlier comment here. Does anyone have a photo of the marquee, or a scan of an advertisement for the house?

It would be worth the trouble of getting good grades to have a theater named after you.

I think the Palace must have been at the northeast corner of Court Street and Mill Avenue, opposite the town’s “skyscraper.” The building there has the same pedimented parapet on the front, although the whole structure has been plastered over, losing all its nice brick and stone details.

The photos of the Ritz don’t give enough context to tell where it was, though they show that it had buildings on both sides.

The last photo on page three of the “Street Scenes” collection shows the Capitol Theatre.

To correct a person today, the rating system began in 1968. There were technically no “R-rated” films in the 50s.

There was a theater at the NE corner of Main & Market – it was leveled at some point prior to 1974, when my family moved to Dyersburg. There is a one-story building there now, obviously not matching the surrounding structures.

You might as well add the Palace. It must have been in the building on the north side of the square at 120 Court Street (street view) now occupied by an attorney’s office. Mill between Court and Market would have been the west side of the square, so the Pastime would not have become the Palace. It’s possible that it became the Ritz, but the Ritz is still a puzzle so I’m not at all sure.

Ripshin: If you are referring to the Capitol Theatre, we had the wrong address for it. The Capitol was actually south of Market Street, at modern address 202 S. Main. Check the photo in my comment of 6:39 pm yesterday. A thumbnail link to a photo showing the Capitol is at the bottom of the third page of thumbnails. The photo shows the front of the building at the northeast corner of Main and Market as well. I think that building is actually still there, but has had its second floor removed. It looks much too narrow to have had a theater in it.

Here is information about Dyersburg from the January 7, 1927, issue of Motion Picture News:

“The deal for the purchase of three theatres in Dyersburg, Tennessee, and four in nearby West Tennessee towns from the Dyersburg Theatre Corporation by the Crescent Amusement Company, of Nashville, Tenn., has been concluded.

“The Crescent Amusement Company already operates one theatre in the city, the Palace. One of the purchased motion picture houses will be closed. The other will be operated and the road show house, the Frances, also will be operated. The Crescent Company also will continue operation of the other picture houses purchased at Ridgely, Tiptonville. Obion and Halls.”So the Frances and Palace Theatres were in operation by early 1927. It’s unfortunate that he other two houses bought by Crescent were not named in the item.

The movie 7th Heaven was released in 1927, so that photo’s caption is off by several years. As the article I cited in my previous comment was dated January 7, 1927, I think we can safely assume that the Palace was in operation by 1926.

The Frances Theatre keeps getting older, though. If it was named for the 1923 high school valedictorian, it got the name even before she started high school. This is from the August 25, 1917, issue of The Moving Picture World:

“Dyersburg, Tenn. — C. J. Enochs has been appointed manager of both the Vaudette and New Frances theaters of this town, following the recent consolidation of these two moving picture houses. Mr. Enochs was formerly manager and proprietor of the Vaudette, but is now in active charge of both theaters. The orchestras of both the New Frances and Vaudette theaters have been released, and music is being supplied by electrical instruments at both places.”The use of the name “New Frances” suggests that there might have been an earlier Frances Theatre. Perhaps Frances Shepard Fowlkes' parents owned the theater.

This item also reveals that the Vaudette Theatre was in operation as early as 1917, and that it was large enough to have supported an orchestra. As we don’t yet have any overlap between the operating years of the Palace and the Vaudette, perhaps they were the same theater?

My mother worked in the Frances Theatre between 1956 and 1958. She worked with a man named Charles Rice. I believe the Frances and the Ritz belonged to the same company. I worked for Martun Triple Theatre during the 70s for a man named Billy Winn. Fun times.