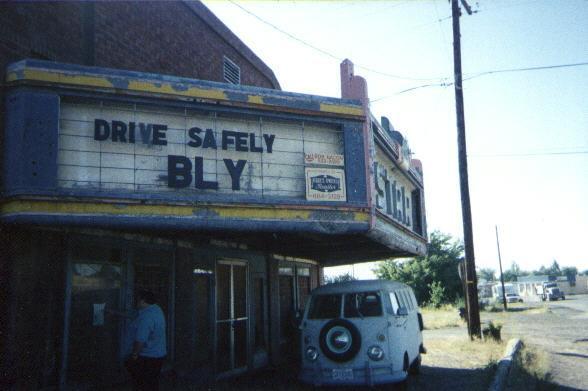 This small town neighborhood theater is located on Main Street, in downtown Bly. It was built in 1948 and opened as the Arch Theater.

Wow, seeing this theater listed brought back memories of driving through the town of Bly as a kid. I remember that for years after the theater closed, the movie “Rufus J. Pickle and The Indian” remained on the marquee.

I’m not sure of its present condition, but will contact a woman who used to teach school in Bly to see if she can provide you any information.

The Star Theater is now a feed store. It was closed when I got to town so didn’t get to see the inside. The wonderful marquee which boldly proclaims Star Theatre and faces directly towards Highway 140 sure got me to pull over quick and get some photos. This isn’t a former movie theater which kind of looks like a theater. It very much looks like what it was orginally built as and is the main building in town.

There are also three tiny photos at http://www.cinematour.com/tour/us/11241.html

What is the theater now? Is it up for sale? What condition is the building in now?

According to the section on Bly in a rider’s handbook published by Cycle Oregon, Bly’s movie house “…was built in 1948 as the Arch Theater but is now called the Star.” It also says that “…a couple part-time residents, Paul and Ruby Dorris, have converted the building to a combination meeting space/antique gallery . The stage and screen are still up, the floor still slopes like a theater, and the venue has hosted potlucks, old-time fiddlers and more.” The Handbook was published in 2012 (PDF here) and is the most recent information about the Star Theatre that I can find on the web. I can’t find a web site for the Dorrises' operation itself, so I assume they don’t have one.

“Arch” Theater…as in Archie? The pastor of the church right next door whose wife and several kids were blown up by a Japanese balloon bomb just four years before?

Looks like the building is being maintained and kept clean.