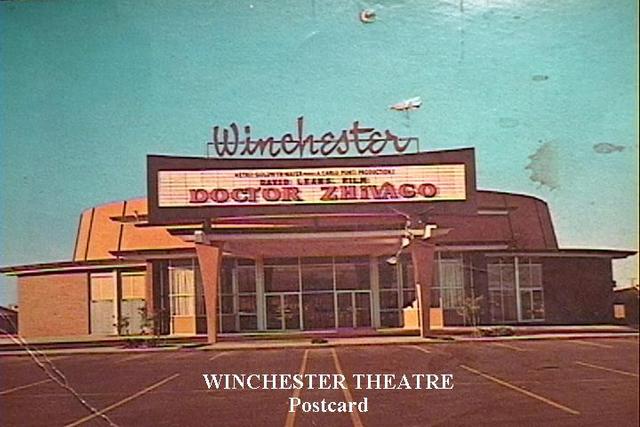 The Winchester Theatre is yet another now-demolished 1960’s movie palace.

Opened in 1966, the Winchester’s large auditorium opened with “Doctor Zhivago” and was the premiere movie house for Lubbock for years.

Although the Winchester was twinned in 1979, it remained a popular place – especially for event films – into the 1990’s.

However, like many theaters of its era, it failed to fend off the proliferation of multiplexes. 1960’s theaters were almost never built with stages so there was no chance to find a new home as a performing arts or concert venue.

Without a new function, the Winchester Twin Theatre closed in 1999 and was demolished.

Any by the way, the Westerner drive-in became the Fine Arts which showed X-rated films!

Hello Gene'64. I am finding you comments on Lubbock’s theaters some of the most interesting and in depth I have read.

Do you have photos of any of the theaters?

Hello again Gene ‘64. You have me wonderiing about my memories of the Town and Country shopping center. I recall it having been located at 4th & University. I also remember the Backstage theater which was near this shopping center, but the only miniature golf course I recall was the Twin Lakes which was at that time in far west Lubbock.

Could the Backstage and the Chapparal have ever been one and the same?

Yes. I think that the Backstage became the Chapparal, and I had completely forgotten that. The “twin” theaters were really tiny.

The miniature golf course was nestled behind the shopping center, west of College Avenue. I don’t know when it closed, but I used to play the course in the 1970s. There were two larger courses in southwest Lubbock, but I can’t remember the names of both. One was the Putt Putt which is still on 29th Drive and the former Brownfield highway (now Marsha Sharp Freeway). The other one was a double course, and I just don’t remember the address. It was very popular. In the 1980s there was another small course south of Briarcroft Savings and Loan on Avenue Q south of 50th Street. I can’t remember the name of it, either, but it was a fun course.

Don & Gene:
For vintage photos of just about every theatre that ever existed in Lubbock, TX, go to the link on Seymour’s 08/28/07 post and type in word ‘theatre’. You’ll see some really nice shots.

Started with Video Independent Theaters here as a usher and then a Doorman in early 1969. Went on to work as a projectionist at the State, Arnett Benson and Village theaters from 1970-1972.

In 1969/1970 we showed what was called “Road Shows” and when you bought a ticket it was for a specific seat and the Ushers would show everyone to their specific seat. Shows would typically run a month or more. There was a couple of hours between showings so we could completely clean the theater prior to the next showing. At the time it was the only theater In the west using 70mm film equipment. Theaters used 35mm equipment at the time so the Winchester was unique in this regard.

If anyone has any pics of the Winchester before it was a twin I’d love to see them. The link listed above on Seymour’s post is not active. Thanks in advance.

I have a color postcard of the Winchester from when it first opened in 1966 with “Doctor Zhivago” on the marquee. It was given to me by my projectionist friend (mentioned in a posting here at the Cinema West) who was once a projectionist at most Lubbock theaters in the 1960s at one time or another. He sent me the postcard from Los Angeles where he was still working part-time at the Egyptian and Chinese, among others. Sadly, he’s now deceased. I don’t know how to post a scan of this postcard.