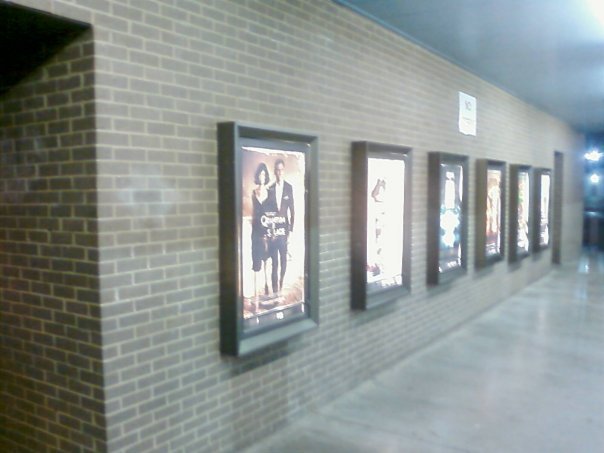 Opened as a quad July 19, 1972 by Lubbock Theatres, this cinema was acquired by Noret Theatres in 1999. It was operated as a discount house in its last years, and was closed in August of 2010. In October 2010 the building was partially destroyed by fire, and it was rebuilt as a school.

NEED PHOTOS BOTH INSIDE AND OUT, WHO KNOWS HOW LONG IT WILL STAND NOW THAT IT IS CLOSED!?

I took photos when I visited family in 2004.

Showplace opend with the following:

Bob and Carol and Ted and Alice R
Song of the South G
Stand Up and Be Counted PG (The song I am Woman by Helen Reddy first appeared here.)
The Wrath of God PG
The latter two were first-run. Song of the South had already opened at the Arnett-Benson the previous winter (where I saw it) and Bob and Carol etc had ran through the mill.
The following were Skeet’s first-run competition:
The Continental, on Broadway west of Q (running a reissue of The Graduate.)
Lindsey, Main and J (playing Ben PG, which is the sequel to the rat movie Willard. A very young Michael Jackson had a hit with the song “Ben.”) (The very next day, the Lindsey would open the black-sploitation film Duck, You Sucker PG)
Arnett-Benson, 1st and University, with the Disney movie Now You See Him, Now You Don’t with a short subject Wetback Hound. Arnett-Benson used to get all the Disney’s first run until National-General’s Fox opened and started a bid war on them. For the win. I didn’t like the Arnett-Benson, and the parents often took me to the Disney movies.)
The Village, on 34th and X. Dr Phibes Rises Again, starring Vincent Price.
The Winchester was running Fiddler On The Roof.
The Cinema West had Junior Bonner PG (the scrawling on my notes read it as “Junior Boner.”) The following day, they would open the annual Woody Allen movie, this one being Play It Again, Sam PG.
The Fox Twin, which had 2 huge auditoriums which would later be split into 4 shot-gun houses, had Portnoy’s Complaint R and What’s Up Doc G. The next day, portnoy gets dropped and they open Conquest of the Planet of The Apes.
The theater I started at would open later that year as the Jerry Lewis Twin at the South Plains Mall. In fact, that summer was when the Mall itself opened, if I recall correctly.

It Was owned and operated by R.A. Skeet Noret for all 38 years.

Duck, You Sucker wasn’t a blaxploitation film. It was a recut version of Sergio Leone’s A Fistful of Dynamite.

I don’t think “DUCK,You SUCKER” was a Black film,It was an Italian western if I remember right.James Coburn Starred? Can’t remember.

October 2010 the old Showplace 6 catches on fire. They rebuilt it as part of the Trinity School complex. The elementary school I believe.