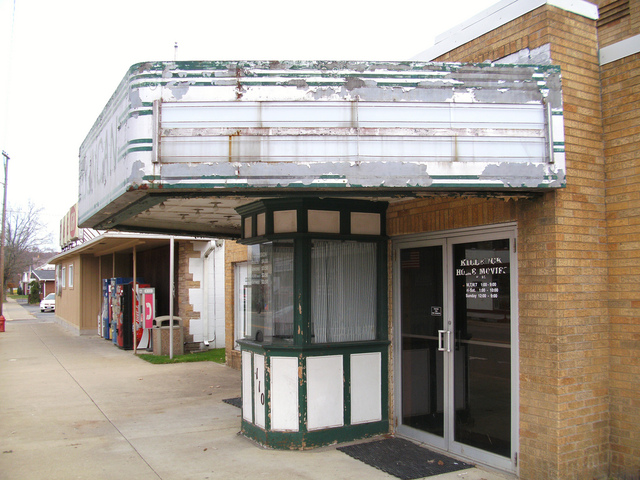 According to a February of 2004 article in The-Daily-Record.Com, there was a major fire in Killbuck, OH. The post office, a food store, residential apartments and the Duncan Theater were damaged in the fire. The Duncan Theater is listed as “Closed for Renovations”.

The theater was remodeled in 1953 after a 14 year vacancy:

KILLBUCK â€" The old Duncan theater here, vacant for the past 14 years, is being remodeled and cleaned up far use as a public auditorium. The stage is being left in the theater as well as some of the seats. The building was closed down 14 years ago when a new theater was constructed here. Present owner of the old structure is Wallis Sprague of Newark.

I remember growing up in Killbuck and going to that theater often. It was in very rough shape, then it was purchased and became not only a movie theater but also a video store. I was part of a civic group that repainted the inside sometime in the early 90’s. Now it is a party center that occasionally shows some old old movies.

Because of this little movie house, I eventually became a professor of film history in California. Growing up in Killbuck in the fifties, I found this theatre was my window on the world, and I can never forget the excitement when those color tinted wall lights began to dim and Hollywood took over. (My Grandma Vera was for a time the ticket taker so I was allowed to sneak on occasion.)I remember the matinee westerns and cliffhangers and Three Stooges shorts as being just as exciting for us kids as the great classic films that came to the village of Killbuck, thanks to the efforts of the rather eccentric owner “Billy D.” I remember the give-away raffle nights with dish sets and painted glasses going to lucky ticket holders—and once the grand prize was a bronze horse with a clock in its belly! I can still hear the crackle and recall the smell of the old popcorn machine in the lobby. Today, when I visit film studios and legendary movie houses,I recall the old Duncan Theatre and the friends I watched movies with there. It would be a shame and a loss to community memory if the Old Duncan were ever torn down. Bill (Paul)Kaser Bill (Paul) Kaser

Bill Kaser above is my brother, so I have some of the same memories. Additionally, I had my first paying job and my first official date at the Duncan in the early 50’s. Momentous occasions.

My job was selling the raffle tickets—a quarter each or five for a dollar—and drawing the winner out of a big wire barrel each Saturday night. The theater was packed on Saturdays because farm families came to town.

When we were in high school,we were far too sophisticated to go to our home town movie theater on dates—and besides my GRANDMOTHER was there(!), so went on dates to the movies in Millersburg or even to Wooster.

I don’t know when the Duncan was originally built, but I do remember my parents recalling silent films there and the name of the lady who played the piano. Anybody recall when or who?

The tickets were a lot less expensive than the prices posted on the window as the theater stands now. There were two feature movies a week (sometimes a double feature) and on Saturday morning there were serials. Sky King or Buck Rogers serials always ended with a cliffhanger to guarantee the kids would come back the next week.Some of my most vivid memories are from the newsreels at the beginning of the evening. For some reason I remember Cypress Gardens in Florida, and lots of pictures of soldiers parachuting out of airplanes. And the baritone voice of the narrator is forever stuck in my head.

I think it is too bad the theater has become such an eyesore, right in the center of town. Did you know there used to be a stoplight right there where Front Street crosses Main Street? While I hate to see historic places disappear, if no one is going to refurbish it, it would be better for the town to get rid of it. I don’t see much interest in historic preservation, since some of the great old Victorian houses and many of the trees once lining Main Street have gone.

My biggest regret is not asking Billy Duncan for some of the movie posters that I’m sure were just thrown away each week when the movie closed.

BTW, there’s a Facebook Page for the Duncan Theater!

Theater is open. Advertising JoJo Rabbit on their facebook page. (before the ‘virus’ stay at home order.)