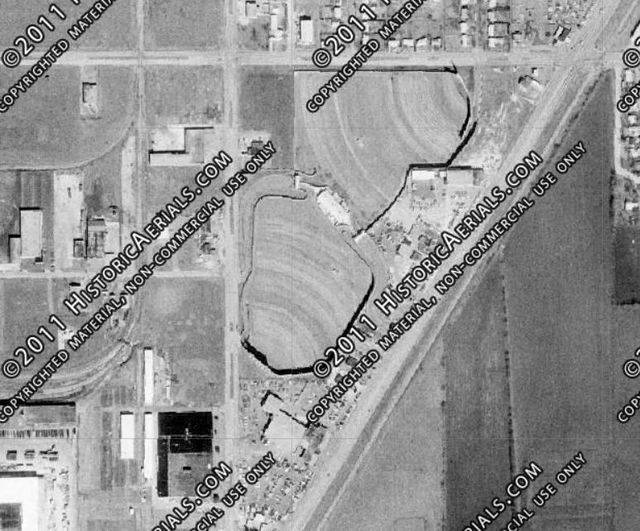 The Garland Road Drive-In was in a very popular location, and opened on April 7, 1950 with Mark Stevens & June Haver in “Oh, You Beautiful Doll”. With a capacity for 600 cars, it had customers coming from Dallas and Garland to watch sometimes prime movies. It was operated by C.D. Leon Theatres. It was closed in 1966.

It was taken over by Tri-States Theatres/McLendon Theatres and reopened on October 3, 1968 as the Apollo Twin Drive-In with a capacity for 1,800 cars and 175 seats for walk-in patrons. The Apollo Twin Drive-In closed at the end of 1986, and has been gone for many years. That whole triangular area was the new Hyper Mart built by Sam Walton. Later it was renamed Walmart.

In the early sixties, this drive-in was owned by Leon Theaters of Abilene, TX. C.D. Leon was the owner. Leon Theaters also owned the Grande in Brownsville and the Crawford in El Paso at that time. Capacity of the Garland was 600 cars per the 1963 motion picture almanac.

Just read about the Apollo in Garland Tx. Saw a lot of movies there. I believe it was owned by Gordon McLendon, same person who owned the Gemini not too far from it in Dallas.

The Garland Rd Drive In eventually became the Apollo Drive In Theatre. The Apollo, owned by the McLendon family was a Twin screen drive in. (Garland Rd was a single Screen). The Apollo was demolished to make way for the new concept store, Hyper-Mart. Changing to Wal-Mart, this store eventually closed. A couple of years ago, the structure was still sitting idle. At one time there was a possible rumor of the Ford Dealership taking over the structure but there’s no foundation to that rumor.. Now would be the time to rebuild another Drive In Theatre there.. Just a thought.

The Garland Road Drive-In kicked off on April 7th, 1950 with searchlights and a circus calliope band wagon featuring Charla. Opening feature was “Oh You Beautiful Doll”. Dallas-Fort Worth was in a drive-in boom period with the Garland, Hines Blvd. and South Loop opening within a week of each other. And this was the first of three drive-ins to be opened by C.D. Leon’s fledgling Leon Theatres Circuit that season proceeded by the Hampton Road Drive-In on May 12th and the Denton Road Drive-In on June 23, 1950. The Garland Drive-in got a boost when the Briley Heights addition brought 400 homes in 103 acre tract just west of the ozoner adding potential customers. Some notables: While playing the film, “Once a Thief” on May 9, 1952, the theater was robbed of $350. In the early 1950s, the First Methodist Church held their Sunday morning services at the drive-in. In 1957, Leon applied to show first-run movies into Garland homes in early pay television experiments.

At the end of the 1958 drive-in season, Leon subleased the Hampton and Denton Road locations to Claude C. Ezell’s newly-reformed Ezell Theater Circuit / Bordertown Theaters Inc. But Leon held on to his Hampton Road location. The Garland Road closed at the end of February 1966. Garland residents wouldn’t be without an ozoner for long as Tri-State Theaters / McLendon Theaters continued its space-aged theme of multiscreen drive-ins at the location. The operators of Gemini and Astro drive-in also opened the Apollo Twin Drive-In.

The Apollo was a $1.8 million location designed by H.A. Jordan on a 31.5 triangular acre lot for a reported 1,800 cars and could accommodate another 175 walk-ins at the patio. The curved 132 foot by 80 foot screens were dubbed by McClendon as “Specturama screens” that were more than 10 stories high. A candy cane-striped 7,000 square foot air conditioned restaurant. Two separate patios with speakers at the tables allowed walk-ups. The twin had two entrances, one on Shiloh Road and the other at Garland Road. The Apollo Twin Drive-in launched with a two-day Grand Opening on October 3, 1968 with “The Lost Continent” and “The Vengeance of She” on the North Screen and “The Detective” and “Come Spy with Me” on the South Screen. Actor Big John Hamilton was there with KLIF AM radio. The “Motion Picture Herald” said that people were amazed at the opening calling the ‘big double A’ the “ultimate of ultimate” in drive-ins.

The theater ran into trouble with the Garland City Council in 1972. The city approved a ban of nude scenes shown at a drive-in if the screen could be seen by passing cars. McLendon had been voluntarily cutting offensive portions from films shown at the Apollo but said mandating the cutting of the films gravitated the situation from self-censorship to censorship. One film sent “by mistake” had lesbian love scenes and had led to the action. A classic court line occurred when a medical doctor testifying n behalf of the City of Garland said, “It is hard for almost any man to go by the theater without being distracted.”

In the 1980s, the Apollo added a new sound system so that patrons could listen to the sound track on the car’s AM radio instead of the speakers. After B.R. McLendon died, the estate of B.R. McLendon sold the Apollo outright to Tri-State Theatres Ltd. Partnership at the end of 1986. That was also the last year of the Apollo Drive-In as the theater was demolished to make way for a new retail superstore. On December 28, 1988 Hypermart – a superstore combining Wal-Mart and local grocery store chain Tom Thumb into a large 24-hour concept store, the first of two built in the Dallas-Fort Worth area and five in the nation. Walmart would go it alone on future 24-hour superstores. The Garland store fulfilled its 20-year lease transitioning to a Wal-Mart prior to closing in 2008 and the company followed its standard practice of abandoning the property to build another nondescript location elsewhere; the Hypermart remained empty into the 2010s. But to some locals, that spot will remain a drive-in destination that produced around 35 years of memories.