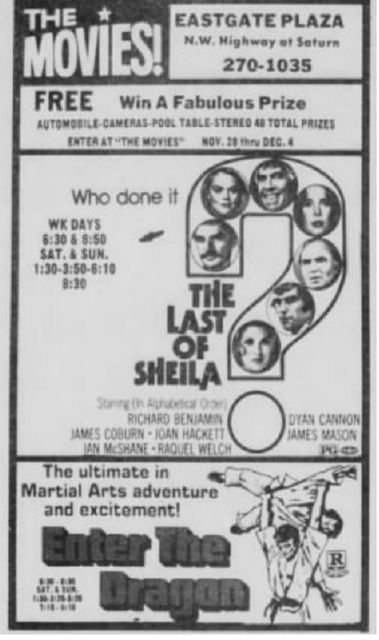 On June 22, 1984, it converted to adult feature films, but not XXX-Rated. There were soon protests about the type of movies screened and after a court battle, the Eastgate Cinema 2 was closed in September 1984.

For a while, the Eastgate Cinema I & II was a regular movie theatre. Then it became a $1.00 Theatre. I heard in its final years, it was showing strong R and some X Rated movies in which is, from my understanding, why it was shut down. It sat in the shopping strip right behind what was the 7-11 that faced Saturn. The Theatre faced NW Hwy.. Either a Furrs or Wyatts was next door to the theatre back then as well.. RAC Photography

I sorry I can’t add much more but I do know it was definitely not in operation of any kind in 94 since my father lived right across the street. I never even realized there used to be a theater there. It was however a Furr’s next door, they finally moved to a new location right off 635 down the street a couple of years back.

The 100,000 square foot Eastgate Shopping Center opened in September of 1972 just off of Interstate 635 at 1450 Northwest Highway at Saturn Road. The twin-screen theater was an original tenant and began life with its moniker of “The Movies” officially at 1430 Northwest Highway. That wasn’t a hit so the theater closed and reopened on September 6, 1974 as Eastgate Cinemas 2 with “The Bootlegger” and “Thunderbolt and Lightfoot” on screen two. The theater was still not a hit and was downgraded to dollar house status entering the 1980s.

Operated by William B. Boren’s fledgling circuit consisting of the Eastgate, Westgate Cinema in McKinney, Wilshire Showcase I & II in Euless, Cineworld 4 and Lancaster Showcase in Fort Worth and two theaters in Blackwell, OK, the writing was on the wall when nine film companies sued Boren in February of 1983 for not providing enough of the owed admission receipts for the period beginning in 1978 forward. The twin-screen era was ending in the multiplex world anyway and the Eastgate was a dead duck in May of 1984. Or was it?

On June 22d of 1984, the Eastgate became a twin screen adult theater and suddenly the theater had the attention of what had been an indifferent populace. Scoring with X-rated hits including Emanuelle and Caligula, the Eastgate was drawing audiences and raised eyebrows. Garland’s first adult theater was a hit! But clientele at nearby family establishments including Furr’s Cafeteria, a Hallmark card store, and a Christian book store launched a petition drive backed by the Garland Church of Christ. The complaints reached the owner of Eastgate Shopping Center, Hank Dickerson Realators.

The initial suit was dismissed because even to the Garland Justice of the Peace, the speed of the process was far too brisk to be fair to the operators of the cinema. But refiled a month later, the Emanuelle (Eastgate Cinema) v. Goliath (Garland) situation was back. Emanuelle’s slingshot was the First Amendment and marketplace of ideas v. the Goliath of overwhelming public sentiment and legal standing on public nuisance attributable to movie posters in public view and a very dubiously worded zoning ordinance. Goliath took down Emanuelle as the realtor and city of Garland got their way in a court ordered eviction of M&B and Eastgate Cinema. “I think it was a victory for the Lord Jesus in that darkness was dealt a destructive blow,” Rev. Hicks said, “I think it was a case of God hearing the prayers of his people.” What followed were police raids of adult video and novelty stores that sought to rid Garland of filth. And the controversial theater would close advertising as the slightly rebranded Eastgate Adult Cinema in its final days for clearer marketing purposes. The Eastgate was offered to anyone who wanted to bring some good-old family entertainment to the shopping center and the cleansed Garland citizenry. Of course, nobody wanted to do that and the Eastgate was history: a sleepy first 11.75 years and a rambunctious legally-challenged final .5 years.