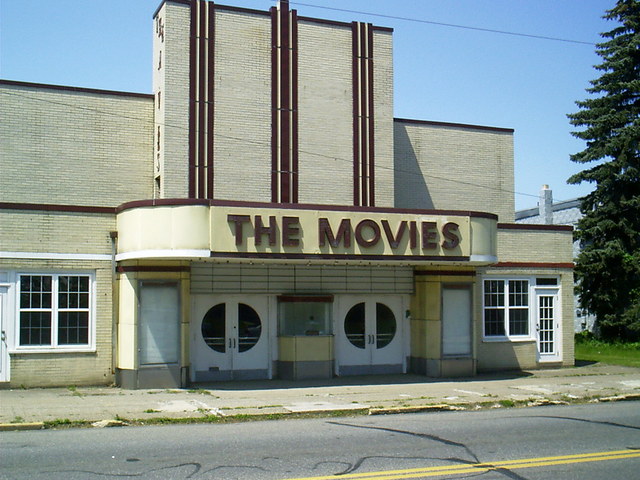 The Sauconia Theatre was opened on September 14, 1940, under the management of John Kofler, who had previously exhibited movies at the American Legion building in Hellertown. It was closed in 1966, but was refurbished and reopened in 1968 by Ellie Kofler, daughter of the original owner.

At that time it was renamed The Movies. The struggling theatre closed again for several years in the 1980’s, and again in 2001. Elle Kofler died in May 2002.

One final event took place in the old building on March 24, 2002, when a television cable company presented a live telecast of the Academy Awards ceremony. Since then the building has passed through the hands of various owners who have spoken of converting into community center, housing for the elderly or a medical facility. None of these plans have come to fruition.

The building was put up ‘For Sale’ in January 2012. In 2015, converted by a dentist into his offices, with the rear one third of the auditorium demolished to provide parking spaces.

Was the creepy Basement full of old one sheets? I hit a Gold mine in an “OLD CREEPY BASEMENT” in the MILLER THEATRE.

From Hellertown an undated postcard view of the Sauconia Theatre.

Now that is streamline for sure,thanks for the photo.

Sued them over a leaky roof? What an evil old lady.She must have the owner of the Highway 21 Drive-in in Beaufort,S.C.also.

(The Morning Call, December 14, 2003) Historic Hellertown movie theater gets new owner at auction – CFO for prior owner vows not to tear down art deco-style building.

By Matt Assad Of The Morning Call

The Movies building in Hellertown sold for $117,000 at auction Saturday, but the sale didn’t move the Main Street landmark any closer to renovation.

Then again, it didn’t move it any closer to demolition either, because it was bought by Ramzi Haddad, the chief financial officer for the building’s owner, Abe Atiyeh.

Atiyeh, a Bethlehem developer and owner of several senior housing complexes, bought the 1940 theater last year for $160,000, and Haddad said he was simply protecting the investment.

That’s what Rosana Rao wanted to hear most. Rao is a Hellertown gallery owner who has been looking for civic-minded investors to revive the 500-seat, 8,000-square-foot theater.

“Well, at least this gives us more time to put together a group that can save it,” said Rao, who has organized a group to try to save it. “This is better than letting it fall into the hands of someone who wants to tear it down.”

People from around the region once flocked to what was then known as the Sauconia after it was built by John Kofler in 1940. The art deco-style theater remained open until Kofler’s daughter, Elle, died early last year.

But in recent years the theater, which seats almost 600, had trouble drawing crowds, with its leaky roof staining the ceiling and walls, and its inefficient heating system keeping the place at a temperature more suitable for hanging meat.

Atiyeh bought it last December, with plans to turn it into a community center where bingo and school plays could be held. He replaced the roof and made a few repairs, but he abandoned the planned renovation and decided to sell it at auction.

The noon auction drew more than 50 people, but only a few serious bidders.

Auctioneer Joe Setton starting the bids at $300,000, but it was clear the dilapidated building wouldn’t fetch that when the first bid didn’t come until Setton dropped the number to $50,000. For five minutes, Angel Bas of Hellertown and Ed Hill, a Hellertown paving and excavating company owner, outbid each other, driving the price up to $110,000.

That’s when Haddad jumped in with rapid-fire bids, each time upping Hill’s price, and sending a clear message that Hill was not getting the building unless he went much higher.

Hill wouldn’t do that.

He said if his bid had won, he would have explored all options, including demolition.

Bas said he planned to turn it into an upscale restaurant and dinner theater that could have opened as quickly as 30 days after closing the sale. Bas said he hopes in the coming months to find other partners and approach Atiyeh and Haddad with a new plan to buy it from them.

This reopened as The Movies on September 5th, 1968. Grand opening ad in the photo section.