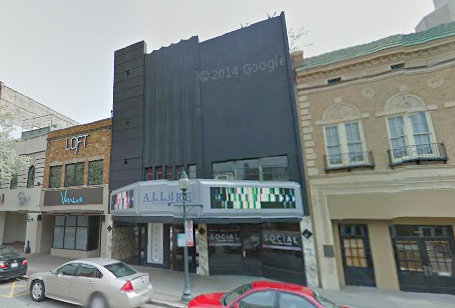 By 1955 it had been renamed Center Theatre and was operated by the R.M. Kennedy chain. it closed sometime in the 1960’s.

This theatre was called the Center theatre in the 60’s. It is now a night club.

The Imperial Theatre was an ornate movie palace with appointments as good as those of the still-standing Carolina Theatre. In 1949 it was gutted, and the south half of the space became the Center Theatre. The Center is rather plain. Without checking to see if they were dimmable, fluorescent fixtures were installed on the walls. When the house lights were dimmed, these fixtures flickered erratically until finally doused. When you’re in the Center today, imagine what it would be like if it was twice as wide, and you’ll have a good idea of how big the Imperial was.

Was also known as the Center Theatre during the 1950’s and 1960’s where numerous protests took place during the civil rights movement.

A vintage photo from 1946 of the Imperial Theatre while promoting an on stage appearance of western star Johnny Mack Brown along with a photo of the star himself.

Chuck1231:
Wasn’t this theatre also known as “The Cinema” which is NOT listed on this site.

“Lawrence of Arabia” played at the Center Theatre on October 17,1963.

“West Side Story” also played here at the Center Theatre on October 18,1962.

“My Fair Lady” also played here around June or July of 1966 as a General Release.

I was an usher and later the assistant manager of the Center Theater in the years 1965-1967. The manager of this theater for many years was Mr. Jim Bellows. The company that owned the Center Theater also owned and operated both the Skyline and South Drive-In Theaters in Greensboro, NC. Just some of the films shown at the Center Theater during my time there included: “A Man For All Seasons”, “The Good, The Bad, & The Ugly”, “Our Man Flint”, “Alfie”, “Georgy Girl”, “Born Free”, “The Professionals”, “Torn Curtain”, and a re-run of “Who’s Afraid of Virginia Woolf” shortly after it won so many Academy Awards. Working there was my after-school job, and I used to do my homework by flashlight in the balcony during the last show each evening. I think its final year of operation was 1981. At the time I left the Center Theater, there were only 5 indoor theaters in operation in Greensboro: The Center, The Carolina, The National (all of which were downtown), The Cinema (on Tate St. near UNC-G), and the newly opened Terrace at Friendly Shopping Center.