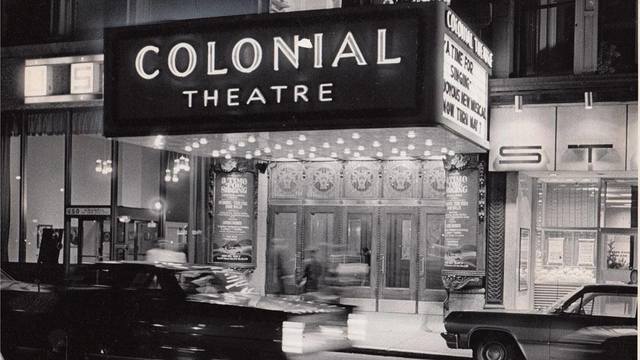 Boston’s beloved Colonial Theatre was built inside a new office building on the site of the old Boston Public Library. The sumptuously decorated house quickly eclipsed the nearby Tremont Theatre (later the Astor Cinema) as the Klaw and Erlanger syndicate’s Boston flagship. It is a richly rococo Victorian-era playhouse, home to both touring shows and pre-Broadway try-outs. The opening production was the stage spectacular “Ben Hur”.

The advent of full-length feature ‘photo plays’ after 1910 created ‘road-show’ movie presentations in legit houses. A number of these movies played at the Tremont Theatre and in February 1913, “The Miracle” in ‘Lyricscope’ opened at the Colonial Theatre. Sound films came to the theatre in October 1927 with the local premier of “Don Juan” using the Vitaphone sound process. The feature was accompanied by a number short subjects which were also designed to show off Vitaphone sound. When the engagement ended, these films went into other Boston houses at regular prices.

The Shubert Brothers controlled the theatre from the 1930’s to the mid-1950’s. At that time, it boasted a square cinema-style marquee which used white letters on a black background. Around 1956 it was thought that the house would be sold to a movie exhibitor, but that did not happen. Emerson College, which also owns the Cutler Majestic Theatre around the corner, owns the Colonial Theatre and leases it to the organization that operates the Wang Center. In 2014, the Colonial Theatre is operated by Citi Performing Arts Center. In January 2017 it was taken over by the London(UK) based Ambassador Theatre Group and following refurbishment & renovation it reopened July 10, 2018 with a pre-Broadway try-out of “Moulin Rouge!-The Musical”.

Here’s a handy link to the comment DavidZornig refers to.

The Colonial will reopen in June 2018 with a pre-Broadway tryout of “Moulin Rouge”, according to this Boston Globe article.

Thank God the Colonial is re-opening as a legit theatre instead of college dorms. Great theatre. Supposedly the longest continually running legit theatre in the USA. Only closed for periods of Re-modeling.

The Colonial’s reopening has been delayed two weeks, to July 10, because of a construction issue. On June 8 or 9, a beam fell from the rigging system of the steel grid that is used to deploy scenery and lighting.

The restoration/remodel of the Colonial is a miracle that came to pass. Of all Boston’s legit houses it has the best audience to stage relationship, with more of the audience in close proximity to live actors than any proscenium theatre in the city. I always knew it as a red & gold auditorium, but the discovery of the original blue looks wonderful in the Globe photos. I now live on the west coast, but hope to hear about acoustics when the Colonial reopens. A veteran audience member told me if a grand piano was dropped onstage it would not be heard beyond the 5th row. In this age of electronic sound reinforcement that should no longer be a concern.

When I first went to the Colonial in the late-1940s and early-1950s, the auditorium was green, with a green house curtain. I mostly went to musicals, but I saw some straight plays, too, such as “Death of s Salesman”, “Darkness at Noon, "Stalag 17”, “Who’s Afraid of Virginia Wolfe”, and had no problem hearing the dialog. (we usually sat in the second balcony, or in the top tier of boxes). In those days, the sound was all acoustic, with no “mics”. I never saw a movie there because occasional film presentation had ended by then.

There was a brief reopening ceremony at the Colonial on Wed. June 27, attended by the Mayor of Boston and other “dignataries”.

Saw many shows at the Colonial. Mamma Mia(3 times) and others. The most disappointing was Jersey Boys. The show was terrific but the use of the “F” word throughout was not called for. My wife and I went to a Wed mat and there were kids 8-11 there. What a disappointment. This is a great theatre and from what pics I have seen on TV and newspapers(Yes Boston still has 2 dailies, thank god) they have done a remarkable job on restoration. Can’t wait to go to another musicl in the future.

I recently saw a list of cities where the hit movie “Birth of a Nation” was exhibited in “road-show” engagements in 1915. It played in Boston at the Colonial Theatre and also at the Tremont (Astor) Theatre. But I don’t know if the movie played both houses simultaneously, or if it moved from one to the other.